First up is the excellent Sword Dancer series (first published in 1986!), which was reissued again in 2006 (Kindle version here). This is the story of a smart ass former-slave-turned-sword-fighter who teams up with a bad-ass-woman-seeking-revenge to find her stolen brother. It’s a classic sword-and-sorcery tale that becomes more epic and world-changing in subsequent volumes as Tiger and Del uncover how a feud between two dueling sorcerers has transformed their world into the cold, cold north and the sandy, sandy south.

What’s so endearing about this series is our smart-ass hero, Tiger, and his snarky humor and laid back view of the world. A worldview which slowly changes while he’s on the road with Del to avenge her family and uncover the history of his own. If you’re discouraged by this opening, I encourage you to read on – Roberson knows what she’s doing, and it’s pretty brilliant: 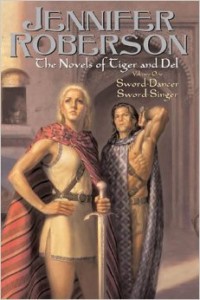 “In my line of work, I’ve seen all kinds of women. Some beautiful. Some ugly. Some just plain in between. And – being neither senile nor a man with aspirations to sainthood – whenever the opportunity presenting itself (with or without my encouragement), I bedded the beautiful ones (although sometimes they bedded me), passed on the ugly ones altogether (not being a greedy man), but allowed myself discourse with the in-betweeners on a fairly regular basis, not being one to look the other way when such things as discourse and other entertainments are freely offered. So the in-betweeners were all right, too.

But when she walked into the hot, dusty cantina and slipped the hood off her white burnous, I knew nothing I’d ever seen could touch her.”

Tiger’s voice wins this whole series for me.

This story enthralled me when I first read it, because though on the surface of things it’s a slash-and-hack series of sword and sorcery novels, it has a lot to say about bodies and slavery and autonomy and the trouble with trying to earn one’s living with a sword, especially as you get older. It’s a brutal world, with abuse perpetuated by and against both men and women, rich and poor, free and slave. The first three books are tightly written and engaging, and though they get a little more travelogue-y in subsequent volumes, it’s a great exploration of the relationship between two broken people in a broken world.

I especially recommend these books for fans of my bel dame books, as you may recognize the gritty setting and heroes-in-opposition tropes that I employed in those books, here (and it’s where I first read the term “burnous” and remains one of the reasons why everyone in those books wears one). Roberson’s work was a big influence.

Roberson continues to write furiously today, most notably for SFF readers in her Karavans series.