THE STARS ARE LEGION: Publication Update

Howdy folks. Quick update, especially for those who’ve pre-ordered THE STARS ARE LEGION (I legit raised my eyebrows when my editor told me how many pre-orders we have already. With what I can track here, even, the conversion rate is 6% for folks who click through to Amazon, which tells me that cover and synopsis is selling books. Thanks, folks! Keep ordering!). I want to make sure I tap you about this before Amazon sends out an email and freaks everyone out. Work continues apace on this one, and I think the final product is going to rock your socks.

That said, my agent and editor recently pulled me into some discussions about how best to market this book, and the issue came up that since we won’t have a reviewer copy ready for another few weeks, we’re not going to be as well positioned in the lead-up to this release as we could be. Sure, I can get the book kicked out the door on time while tearing out my hair (fuck knows I’ve done it before) but one of the things my prior work has suffered from is short lead/buzz times. Some of that is my fault, as I tend to fiddle with my books until the end. Some of that is that this is a bigger press book and their marketing teams prefer longer lead times. When we looked at all of the books coming out in October – not just Saga titles but other books with October release dates in the genre – it also looked like we were going to be vying pretty hard for market voice. Last year EMPIRE ASCENDANT came out the same day as ANCILLARY MERCY, among others, and though that may be OK with a book that’s $14.99, the hardcover for LEGION will set you back the cost of two books, and if you can only afford one that week, wellllll…. yeah. 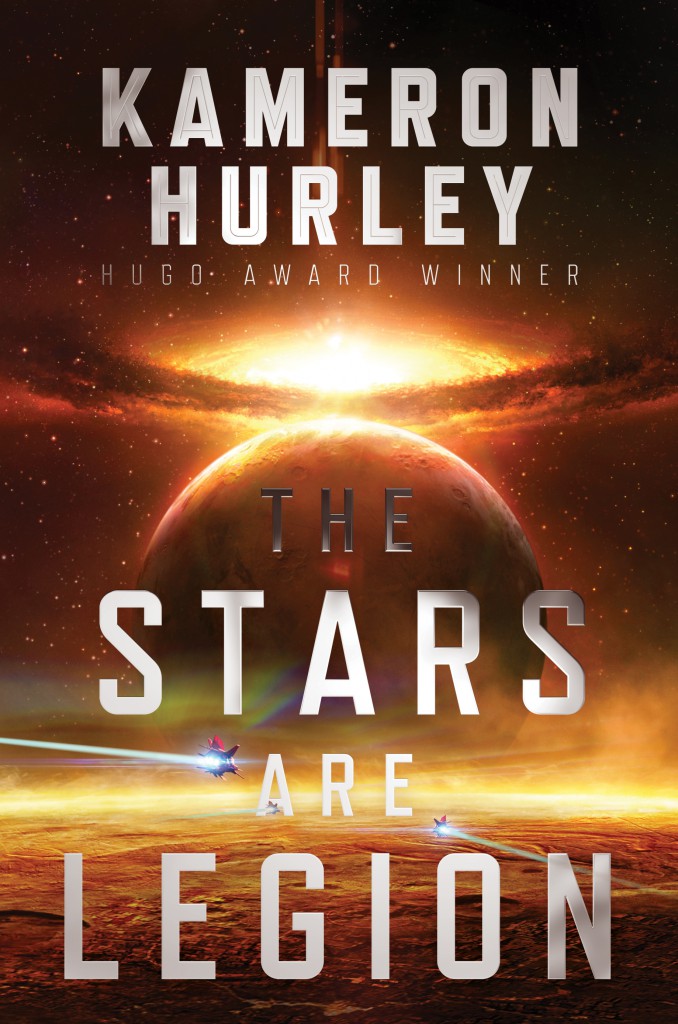 All that is to preface me saying that we’ve decided to push out the launch date of THE STARS ARE LEGION from the first week of October this year until the second week of January next year, which is a much slower book week. You’re going to still see the original date online for awhile, but I want to be the first to give you a heads’ up that it’s going to change, and it’s not a sign of the apocalypse, just Team Hurley trying to give this book the best shot we can.

This doesn’t impact anything else right now – THE BROKEN HEAVENS is still scheduled for Spring next year. LEGION itself is in a big revision right now, being mostly-done. I’m heading up to a cabin in the woods this weekend to give myself some headspace away from my sick dog and filthy house to focus wholly on cleaning up and clarifying the plot and reveals.

So no worries about, you know, me not having anything to turn in. This was largely a strategic decision. That said, it sure won’t hurt to have longer to polish this book. It’s a weird book with a lot of interest and pre-orders, and I’m not going to sniff at having more time to polish the book and build interest in it. I was initially pretty hesitant to do this when my agent pitched the idea over the phone, as I didn’t want all my books to push into each other, but as most know, smart marketing talk can sway me. I know sense when I hear it, and I tamped down my emotions about it and agreed that strategically, this made more sense.

One of the things I’ve taught myself how to do at my day job work is divorce myself from the emotion of a thing vs. what is best for the thing. That’s a tough skill to cultivate, but when you’ve worked with enough teams on enough projects you start to learn to divorce your ego and go with what is best for the success of the project as opposed to what will make you feel most brilliant. Moving the book does not make me feel brilliant, and in fact left me feeling dejected enough on Monday that I poured my sorrow into a glass of Talisker, but it makes sense for the long-term success of the project, and I awoke Tuesday knowing it was the right thing to do.

It also gives me the ability to work on THE BROKEN HEAVENS all through October instead of pausing for six weeks to do promotion around LEGION’s release. That helps ensure you all get that third book out here before I’m hit by a truck or whatever seems to happen to epic fantasy novelists when they get to book three. Alas, this does not mean I necessarily get more time to write LEGION – it just gets to spend more time with reviewers and more time in development. What I’ve learned with bigger house releases, as with GEEK FEMINIST REVOLUTION, is that after your first copyedit pass, they try and keep the manuscript away from you so you don’t fuck with it. I appreciate this sentiment, but it does mean that I have to be super brilliant sooner in the process.

Anyway, part of me is a little deflated about this and part of me is relieved, as I would really rather be spending October working on THE BROKEN HEAVENS. I also like the idea of taking 30 days mostly “off” here between books. “Off” doesn’t mean not writing, but, to me, means not grinding every day. I might play a little WoW and read some books or something while working on tweaking THE BROKEN HEAVENS outline, for instance. Then it’s back to the grinding so I’ll have something to show my agent in August, and we can turn in a draft between October and December this year.

I have had a pretty exhausting last six months with the sick dog, switching day jobs late last year, edits to GEEK FEMINIST, Patreon stories (to pay for said sick dog), and writing LEGION. I think promotion for GEEK FEMINIST REVOLUTION, editing and copyediting LEGION, and writing THE BROKEN HEAVENS is going to keep me plenty busy the rest of the year.

So there’s the update: you know when I know, folks. Thanks for sticking with me.