“We Have Always Fought” Guest Post at A Dribble of Ink

I invite you to check out this guest post I did over at A Dribble of Ink on women fighters: 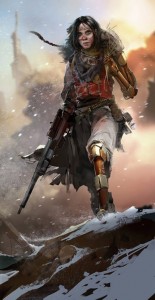 I’m going to tell you a story about llamas. It will be like every other story you’ve ever heard about llamas: how they are covered in fine scales; how they eat their young if not raised properly; and how, at the end of their lives, they hurl themselves – lemming-like- over cliffs to drown in the surging sea. They are, at heart, sea creatures, birthed from the sea, married to it like the fishing people who make their livelihood there.

Every story you hear about llamas is the same. You see it in books: the poor doomed baby llama getting chomped up by its intemperate parent. On television: the massive tide of scaly llamas falling in a great, majestic herd into the sea below. In the movies: bad-ass llamas smoking cigars and painting their scales in jungle camouflage.

Because you’ve seen this story so many times, because you already know the nature and history of llamas, it sometimes shocks you, of course, to see a llama outside of these media spaces. The llamas you see don’t have scales. So you doubt what you see, and you joke with your friends about “those scaly llamas” and they laugh and say, “Yes, llamas sure are scaly!” and you forget your actual experience.

What you remember is the llama you saw who had mange, which sort of looked scaly, after a while, and that one llama who was sort of aggressive toward a baby llama, like maybe it was going to eat it. So you forget the llamas that don’t fit the narrative you saw in films, books, television – the ones you heard about in the stories – and you remember the ones that exhibited the behavior the stories talk about. Suddenly, all the llamas you remember fit the narrative you see and hear every day from those around you.  You make jokes about it with your friends. You feel like you’ve won something. You’re not crazy. You think just like everyone else.

And then there came a day when you started writing about your own llamas. Unsurprisingly, you didn’t choose to write about the soft, downy, non-cannibalistic ones you actually met, because you knew no one would find those “realistic.” You plucked out the llamas from the stories. You created cannibal llamas with a death wish, their scales matted in paint.

It’s easier to tell the same stories everyone else does. There’s no particular shame in it.

It’s just that it’s lazy, which is just about the worst possible thing a spec fic writer can be.