In the first grade (3rd grade? whatever), my best friend ran for some student office, a rather innocuous one, I believe, like Treasurer or something like that. Treasurer was – I knew, even then – a good bet. He was an exceptionally gifted kid: smart, funny, brilliant; played violin and piano, read chapter books to the class, and had already skipped a grade.

He was a great pick for the office, but I remember being shocked at his chutzpah when he announced he was running and asked me to be his campaign manager. I knew we were both deeply geeky people, and putting me, another deeply geeky person, next to him on stage pretty much nailed the coffin shut on his chances. So I declined to be campaign manager, and he made a smarter choice  – a funny, far more popular guy who could bring in a few more votes outside the non-geek crowd.

When he and the campaign manager got up onto that stage and did their campaign sketch/speech it was perfect. It was funny, engaging, smart. I was deeply proud to know the guy.

I knew he was running against a more popular candidate, but I couldn’t help but think, while the students laughed and clapped at the end of his speech, that he’d win it regardless. He’d win it on talent, because he was a smart kid who made good choices.

When the ballot results came in, I sat at my desk clasping my hands in front of me, riveted to the PA speaker as the principle read out the list.

My friend and his campaign manager stared too. Anticipation. Hope.

Hope for us, at least.

Looking back, I expect the class already knew the results.

When the principal announced the name of my friend’s rival as the elected treasurer, I felt sick. And the utter look of shock and devastation on my friend’s face is one I carry with me to this day.

And it’s an ugly loss.

I’ve always viewed the Hugos and other “popular” fiction awards like the Gemmell as a rigged game. It’s a popularity contest. It always has been, since the very beginning. Popular awards are as messed up and corrupt as any other election.  The most engaging, insightful, and technically lovely work doesn’t generally win (whatever “the best” is). What wins is the work the most people have read and liked, or, barring that, the work the most people have heard of.

It’s no wonder that we’re seeing more and more folks hitting the Hugo list who have massive online followings – people of every sort.  When Scalzi won his Hugo for Best Novel last year, there was plenty of snark, as much snark as there will likely be when Wheel of Time rolls off with it this year, despite a fine showing by ANCILLARY JUSTICE as the year’s best book (ANCILLARY JUSTICE 4EVER).

WoT will win because it’s been read the most. It’s loved the most.  It’s a bloated, ambitious mess, but it’s OUR mess. And it will be rewarded for it.

Any book that’s only been out a year just doesn’t have a chance.

Is that fair? No.

I can see your ugly disappointment already.

Many folks on the ballot are folks who’ve learned how to move the internet – myself among them – and I find it disingenuous to say that it’s OK for me to move the internet but not OK for others. Would I prefer that we only shared awesome, happy, not-oppressing-every-fucking-person screeds on the internet? Sure! But it’s the fucking internet.

All you can do it use your own voice for good. And amplify other good voices.

“We Have Always Fought” is the first blog post, ever, to be nominated for a Hugo Award. It’s also been read by more people than all of my books and short stories combined, and possibly read more than any single book in the Best Novel category except the collective Wheel of Time.

We can chomp about the evils of the Internet, and how it’s used to manufacture bullshit messages about oppressing people. But I want you all think about this: “We Have Always Fought” is not about silencing others, telling women to get back into the kitchen, or a piece of Nazi sympathizing.

It’s a post that asks creators – fiction writers, screenwriters, game makers, every creative person telling stories – to rethink the tired old narrative that erases women from history, from the present, from the future. It’s a cry for change, and the resonance it generated within the community shocked me.  I don’t have current stats, but six weeks after it came out last year, we were already at 50-70,000 hits. And the vast, vast VAST majority of the responses were overwhelmingly positive.

And when the Hugo nomination came out?

My friends, that shit is making the rounds again.

We spend a lot of time concentrating on backwards bullshit. I know why we do it – people whose mission in life is to basically to strip away your human rights are fucking scary.  As the member of a couple of groups that a lot of people would like to throw in a gaol or drag to death behind the back of a truck, I get it.

But I’ve been blogging for ten fucking years. And let me tell you – if I wrote “We Have Always Fought” ten years ago, it would have been ignored at best, and widely ridiculed at worst.

I could point to exceptional work in every category here, just like every year. And blatant bullshit, just like every year.  But you know what? Before we all throw up our hands and say, “What the fuck is the point and fuck everything and NOTHING WILL EVER CHANGE!” I invite you to take a look at, for instance, what the Best Fan Writer Hugo looked like ten years ago:

No, no, surely no one has EVER politicked for the Hugos! Surely this is the Worst Year Evah!

Sorry, gotta put on my historian hat for that one, my friends. Because I have a sign over my desk for whenever I get worked up into a frenzy that’s a quote from Paul Henry that says, “In times like these, it helps to remember there have always been times like these).

So, now let’s look at the Best Fan Writer list this year. Because I can fucking tell you, it’s an impossible list of nominations. I don’t think I’ve seen that many outrageously, outspokenly feminist women on a list outside the fucking Tiptree.  I’d have told you last year, even this year, that that list of women all on any single list for the fucking Hugos of all things was im-fucking-possible.

So as much as I’d like to spend all my time being mad at how shitty politics are in high school popularity contests – like we all say every year – you know what? It’s been a lot worse. So much, much worse. This is not an unprecedented amount of politicking. This goes on every year.

The real surprise is that so much good work makes the ballot at all, among all the bullshit. It reminds us that lots of bullshit gets through, yeah, but there’s hope. 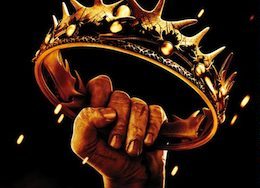 Remember my buddy from elementary school? He went on to be a successful immigration lawyer, fighting the good fight against ICE; protecting the vulnerable, giving voice to the voiceless, and all that shit. He does real, life-changing work that has nothing at all to do with whether or not he won a popularity contest for Treasurer in fucking elementary school. His life is measured by the work he does, and the lives he makes better. Not a cash prize, a tiara, a nomination for “cool dude” listed in the Guardian.

I’m proud to say I knew him back in the day.

Always. In life. In fiction.

There are a ton of good folks who will never, ever be nominated for any awards ever. They will struggle on writing incredible work that people love and never get acknowledged for it. And there are plenty of other folks who actually make a living writing fiction who won’t be nominated either, who I’d trade all my award nominations to, just so I could have their sales numbers.

But you know what I have? I have hope. More hope than I had ten years ago.

Because if you’re worried about the future of science fiction – and sure, who wouldn’t be? –  I’ll leave you with this parting thought.

Welcome to the fucking future.