What’s it Like to Be a Creator on Patreon? My First Month

I’ve never crowdfunded anything before now, though not for lack of thinking about it. I have contractual obligations on everything novel length at this point, and with Tor’s new novella imprint paying so much for novellas, it didn’t make much sense to crowdfund them. So I looked at the type of fiction that generally pays the least no matter how I try to publish it – short fiction.

I’m not a fan of Kickstarter in part because what you’re actually being paid for, most often, are the actual costs to create the thing itself. Not your labor. Not the time that you, as the creator, put into it – so better hope you can pay your bills another way in the meantime. In addition, you have to pump a lot of time and effort into rewards and upgrades, and I just… I barely have the time to write between my day job and other obligations. Spending a lot of time on fulfillment would be nearly impossible for me.

I needed a crowdfunding option that was closer to literal patronage than Kickstarter, and I found that with Patreon.

I looked for rewards that weren’t hugely time-intensive for me to fulfill, but that still gave backers behind-the-scenes stuff that would be valuable. “Your name in the acknowledgements” AND the story itself that you helped me write was a great $1 backer level. Easy for me to fulfill, and exclusive content for the backer.

The inspiration for the next tier reward was the Brandon Sanderson writing videos. I was going to write the short story anyway, so doing a screen capture while I wrote and then stitching the videos together should be pretty cut and dry. The same thing with the “behind the scenes” talk track video – this was just me talking about where the ideas behind the story came from, and why I’d chosen to structure it the way I did. I knew there could be some interest in this as it’s a big question that I get from fans; it’s usually implied in that generic “where do your ideas come from?” question. Doing this video gave me a way to answer that in a way that wasn’t so huge bucket generic.

Others rewards – a pep talk email, emails and photos from my travels, post cards from my travels, and flash fiction at the higher levels – were also low on the labor intensive scale but high on the “exclusive” end. I also included chapbooks at the $25 and up level, keeping it to just 2x a year to ensure that I wasn’t completely overwhelmed every month with fulfillment (I also just really enjoy making chapbooks, to be honest). I’m also working on a $50 backer level that will include a holiday chapbook with an original short story as opposed to a reprint from the Patreon, inspired by this backer level of Tim Pratt’s.

I came up with the rewards in conversation with my spouse, who is a far more regular backer of Kickstarters and Patreons than I am. This is the place where you need to do the most thinking, and I really thought it out. In addition to rewards, I also needed low-labor bonuses – so adding longer stories, a podcast, cover art, copyediting, and short story collection bonuses as we reached a higher per-story level seemed to work out well.

Mostly I needed to figure out at what “per thing” level it would be worth it for me to do that thing. That’s why we don’t unlock the podcast until $3500. That’s going to be time intensive for me, but at that level, I could justify it. Same with print books – print books are both time intensive and cost prohibitive, so we’d need to hit a much larger per-thing goal in order for me to justify it.

I wanted to keep costs as low as possible on this, but costs are going to be inevitable, especially when you’re giving physical rewards. My immediate costs, though, were just ensuring I had the software I needed to make the digital rewards.

My immediate cost was $59 for a Pro Vimeo account. This let me password protect the backer videos at the $3+ and $5+ levels and the bonus video I have for the $10+ backers.

I also needed a video capture program, and chose Snagit for $49.

Having sent out 100 chapbooks to mailing list subscribers, I knew about how much it would cost to send out 100/150 of these twice a year.

Flash fiction for the $100 and up folks will cost me postage and paper; postcards cost me a stamp and the postcard. So we’re looking at $3×4 or $12 per backer, plus the time it takes to write the flash fiction, additional emails, and write the postcards.

In calculating these yearly costs, I’m also including the $59 Vimeo cost

So, how much time does it take to make all this stuff? This is a cost that nobody ever includes when talking about crowdfunding, and I think that’s selling it short. The reality is that as a creator, your time is your biggest resource, and I can tell you – as somebody with novel deadlines until 2018, occasional freelancing work, and a full time day job, I pay a lot of attention to how much time I’m spending on what. So here’ show it broke down:

5 hours: This took way longer this time because I had some bad recording sessions and was still testing software for screen capture. Hoping to reduce this to 2 hours next time.

4-5 hours: This is the time I expect to put into the first one. I’m only doing 4 a year instead of every story release, so this will vary.

5 hours: Including the “pep talk” email for backers at the 10+ level and finding stock photos

Here, of course, is what everyone wants to know. How much money did you actually make?

There were 3 credit card declines which were not resolved. Patreon takes a 5% cut, and I also pay all credit card fees (ranging from 2-3%).

Payments didn’t all magically get dumped into my account on the first of the month, though. They took about four days to process (Patreon states you’ll have all funds by the 5th of each month). Patreon has just 25 employees, and processing payments happens in batches. There doesn’t seem to be a rhyme or reason to it that I could tell. Backers at all levels were charged on different days. But once everything is deposited into your account, you can either choose to send it directly to your bank account or directly to your paypal account. I chose the cheaper option, the bank account option, which charges me just .25 cents instead of Paypal’s 3% per transaction.

Here’s the chart about where the money went: 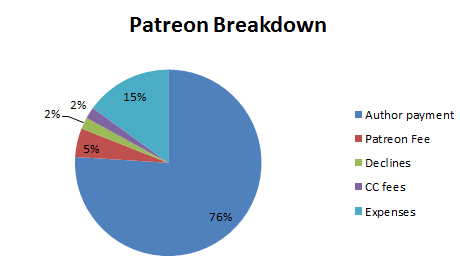 For folks who are like BOOYAH THAT IS A LOT OF MONEY ACTUALLY GOING TO A CREATOR TO MAKE A THING. I will say: yes. Yes, that is the entire point of a Patreon as opposed to a Kickstarter. You are paying me directly so that I can spend the time I need to create new things.

Because creators should make money for their work. Creating things is work.

So it took 35 hours to make the story and all rewards,

That works out to about $26 an hour, which is an actual solid living wage. If I wrote a short story a week I could quit my job, but I think trying to write a short story a week and fulfill my novel deadlines might kill me. Also note that backers are supporting me with the idea that I’ll only be writing a story every 6-8 weeks. Monthly or bi-monthly stories would earn less based on patron caps.  And let’s also keep in mind that Patreon is a very new platform. When it goes away, or when patrons get tired of supporting you (fandom can be fickle!) you would be screwed.

Now, to put some of this in perspective on art vs. corporate copy, I charge $90 an hour for corporate copywriting. Big brands know what good copy is worth, and they will pay for it. I would argue that fans know what good stories are worth, too, but only from writers they know and trust. If you don’t already have the trust of a core group of fans, you need to build that up first. Folks who supported me knew that when I said I was going to do something, I’d do it. The story was on time, the rewards came in within 72 hours of it posting (Patreon recommends this, since there can be declined CC’s), and I post regular updates so folks know what’s going on.

Did You Expect So Many People to Support You?

I actually soft-launched the Patreon to my mailing list subscribers first to see how close we could get. If I only made $20 I figured I’d just can the whole thing. Because if your most ardent fans won’t support you, there’s no reason to bother going to a wider audience. But soft launching to the mailing list got us halfway to the $500 mark, so I went ahead and pulled the trigger on it.

However, I launched this right before the Puppy Neepery began. I was going to hold out a week, but on hearing through the grapevine that there was going to be a far-right racist/sexist/homophobic/gamergate-style backlash sweep of the Hugos, well… there’s no better time to remind people that there are other authors they can support in the genre. Channel the rage into supporting and/or doing something fabulous. That’s what I’m doing.

So, thanks again, puppies! You’ve done some really great things for this raging liberal feminist’s career this April (more on that here in the next couple weeks. For now, I’ll just say: muwaha haha ahaa).

It’s often said that any artist can make a living at their art if they have 1,000 true fans – folks who show up to buy and read and talk about everything they write. I now have a little over 200 supporters at Patreon pledging $1,276 per short story. If we extrapolate that to 1,000 you can see how that could play out. I could quit my job and do this full time no problem.

But all these crowdfunding efforts are new, and as said – fickle. Relying on the crowd for anything can be as unreliable as corporate work. You never know when/if folks will lose interest, or head off to the next great platform. Your fans can, indeed, fire you.

So thanks to everyone who’s come out to support me, and good luck to everyone else with their efforts. I think this is a great time to be a creator, but it involves taking a lot of risks sometimes, and stepping outside your comfort zone. This effort could have failed – it could still fail, or people could get tired of it and end it in a month or a year. But it’s better to try and fail than just sit around complaining about the state of publishing and not do anything about it.

I’ve been taking a lot of publishing risks lately. Another of which seems to be working out, too. But you have to be brave enough to face the possibility of failure, and stubborn enough to follow through if it turns into a success.