“You’re No Different Than That Thing in the Cellar”: Thoughts on “The Woman” 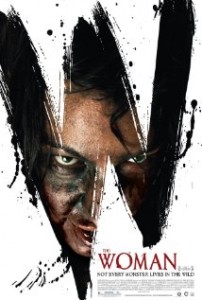 Note: this is a film that is about violence against women. Triggers ahoy.

Long-time readers know that I get really pissed off with creative work that employs random violence against women as some kind of lazy shorthand. Creators do this for all types of reasons. You don’t have to work too hard at characterizing your bad guy if you just have him randomly rape somebody. We all get our ire up and go, “Yep, that’s the bad guy!” without caring too much who he raped or why. In fact, we generally hear very little about the victim of the assault. The victims are just there as plot devices. Sadly, fictions tend to ignore the women who are assaulted. We’re just there to get beat up so that the bad guy can look bad and the good guy can look good by “avenging” us. What we think about it or do about isn’t considered terribly important. We’re just fodder for some guy’s story.

Do I ever think random, shorthand violence against female characters is justified?

Do I think that there’s an instance where depicting brutality against women is appropriate to the story being told?

Yes. And here’s when that is:

When the story is actually about the institutionalized violence in our society directed at women. When it’s a story about exploring why and when that happens, and what it means, and how it twists both men and women, and who we are as a society because we tolerate (and even encourage) it. When a story actually sits down and actively tries to tell you something without being lazy about it.

I recently sat down to watch the film The Woman. I’d read a lot of mixed reviews about it. Just the premise terrified the crap out of me. It’s about a wild, feral woman who’s captured by an apparently unassuming family man and his creepily accommodating family, who attempt to “civilize” her.

I flailed and freaked out about this for awhile, but after reading a bunch of different responses, I realized I needed to see it for myself. Minor spoiler right here: if I hadn’t read in the reviews that the woman eventually gets free and has her revenge, I would not have been able to watch this film. It’s… really creepy.

But what’s it *about* you ask?

It’s about just what it says it is, and so, so much more.  Some spoilers ahead:

This is not that movie.

This is like somebody decided to “tame” some feral Conan. Among the first things she does it bite off the guy’s finger. And that’s just the beginning.

Our feral woman is not helpless. She’s not there to romanticize victimhood. She’s Conan caught in a bad situation with a bunch of crazy people.

And that’s what really stands out in this movie – not the craziness of the feral woman, but the absurdly fucked-up family who holds her. She seems almost normal and sympathetic by comparison as she eats fingers and rips out people’s hearts.

This is the story of a normal-seeming family of four – the hot shot lawyer dad, the plastered-on smile stay-at-home mom, the sports-playing son and emo daughter. They live in a beautiful house in the country. They are boringly affluent. They attend parties like normal people.

But they have a dark secret, of course.

They’ve got a wild woman in their cellar.

Because this is, in fact, a house of beaten, repressed, and abused women. The way you begin to pick up on just how terrified they are provides much of the movie’s horror. There are two particular scenes early on – one where the father sits with his daughter on her bed, and puts his arm around her. He talks blithely of normal subjects, such as school ending and college beginning, but when he puts his arm around her, the daughter’s whole body goes rigid. She does not look at him. And in the hallway outside, you see the slow, terrified movement of her mother approaching the door – one step at a time, easing closer and closer, as if seeking to catch or dissuade her husband from whatever vile thing she’s afraid he’s going to do.

In the next scene, his wife asks, quietly, if it’s really the right thing to do, keeping a woman in the cellar. Up until this point, there has been no explicit violence against the women in this household. Just that cold, creepy, terrified feeling that they all walk around with. The man’s brushing his teeth. He comes into the room, looks at her, and slaps her gently. It’s not a violent slap. It’s as if he were swatting a fly, as if he knows that all he needs to do to remind her of her place is apply this simple, degrading move. He does not actually have to hurt her. Just remind her that he can. “I’m going to sleep now, babe,” he says,a and sighs contentedly and slips beneath the covers while his wife stands numb in the middle of the bedroom.

The family’s strange compliance with the husband’s increasingly bizarre requests regarding the wild woman start to make a lot more sense, despite the wild absurdity of the whole situation. In fact, it’s clear from the outset that the directors know this is a very absurd setup in the silly way they introduce the woman to the man in the first place, with some hyped up sexytime music. It looks ludicrous. Unbelievable.

But this isn’t a movie that’s literally about the woman in the cellar. It’s about all those things we don’t talk about. All those other women in the cellar, the ones we pass everyday at work, or at the grocery store. They’re the girls and women we see in school, or on the bus.

This was an epic horror movie for me because I understood some of what the women in this house were feeling.  Because, like many women, I know what it feels like to be stuck in a relationship that you feel just isn’t right, but you have no idea how the fuck to get out of it. You don’t have the tools or skills or perspective to escape, and everyone around you thinks your life is perfect, and normal, and you keep up the game because you don’t want to admit you made a mistake, or that you’re weak, or that you need help.

As the violence against the woman downstairs escalates, and the perfect façade this family shows to the world begins to crumble, I found myself nearly jumping up and down anticipating the escape of the woman in the cellar. You’re ready for her to get loose – and that angry, fucked-up, fuck-you part of you that wants to crush the fuck out of assholes’ skulls and tear out their hearts – wants to be, just for that one glorious moment, the woman who gets out the cellar and opens unholy fucking terror.

Toward the end of the film, things go off the rails a  bit, with some – if you can believe it – *really* over the top and what-the-fuck moments. But the gut punch also came there at the end, when the man grabs his daughter by throat and picks her up and spits at her that she’s just an animal, that she’s “no different than that thing in the cellar.”

And this gets to the root of the fear, right here. When you walk around in the world as a woman, you get this creepy feeling oftentimes that men really do just think of you as a thing, an object, as meat. You’re just there to fuck, or to hang out with so he can get status from other guys. You see these images of how women who are valued are supposed to look, and you see that you don’t look that way, and you wonder if that means you have no value. You get the feeling that you could be a Pulitzer Prize winning astronaut billionaire who cured cancer, and you’d still have a bunch of guys trolling your comments saying, fuck you, I’ll just rape you, and what will you be then, bitch? Because sexual violence is how you control women, how you put them in their place, how you maintain your own dominance.

For the guy in this film to actually say it out loud, to give voice to that terrible fear that so many of us have, was actually kind of cathartic for me.

“You’re no different than that thing in the cellar.”

Of course, immediately after this, the thing in the cellar rips out his heart and cuts his son in half.

So really, yes, that’s true. We can indeed be just like that thing in the cellar.

But if you can stomach this movie – if you’re prepared for it – and if the bizarre shark-jumping weirdness of some of the twists at the end doesn’t ruin it completely for you – this is a terrifying, and terrifyingly weird exploration of everyday violence, sexism, abuse, and power.