Books you Should be Reading

In an ideal world, I’d write up whole blog posts about each of these, but for the sake of brevity, here’s some great books I’ve read this year that you may love, in no particular order: 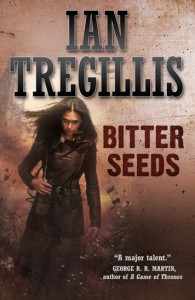 Ian Tregillis’s Bitter Seeds is… a great book. The Nazis have invested in a supersoldier war program that exploits and tortures young children, effectively turning them into Xmen who battle the Allies. On the other side, England is calling on its old-school socererors and their loose command with the creepy “fairies” of old that demand tribute in blood and bodies. This is a brutal little book about the tough choices that are made in war time – who gets sacrificed, who decides, and what it costs them. My one quibble with this beautifully researched and creepily brutal novel? For a country in which most of the men are at war, there sure aren’t that many women characters running around Britain, save for the wife of the protagonist, who I kept hoping was seriously going to surprise me and turn out to be more than simply the footnote in her husband’s story. Alas. Creepy Gretel the Bad Guy on the other side of the divide nearly makes up for it, though there’s a random necrophilia scene that I’m not so sure was necessary. Go buy one.  The second book, The Coldest War, comes out next month, and I’ll be reading it. 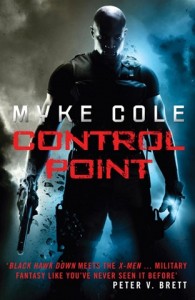 I briefly mentioned Myke Cole’s novel, Control Point, on G+ when it first came out, but here’s some more thoughts. This is very much a first novel, with all the stutters and stops that may imply. But Cole’s book sucked me into the scary military bureaucracy as it may look if it turned out some people started exhibiting superpowers. Is the solution good? Is it bad? It’s neither. Far more than the cool magic battles in magic-land, this is a book about exploring that hazy gray area of conflict. No, policing people in this way is not ideal, and can be downright barbaric. But what would *you* do? It’s that dark question that kept me turning the pages. I’m curious to know how Cole’s going to resolve this one. Some negative points for totally random and unnecessary attempted rape scene (really, during the middle of an ambush/firefight? I mean, really?). His second book, Fortress Frontier, comes out in February. 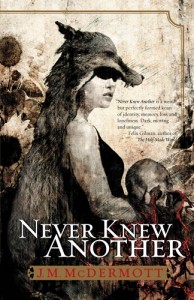 For better or worse, JM McDermott’s Never Knew Another and When We Were Executioners should have probably been one book (including the third, as yet unpublished book). It’s why I hesitated to recommend it when it first came out. I wanted to see what McDermott would do with the second one. This is a crisp, understated little tale of two demon hunters in the country of Dogsland who mine memories from the skull of man touched by demons in order to root out all those he has touched, and all of his demon-touched associates. In this world, those with the demon taint literally infect all those they come into contact with. They are feared and reviled for good reason, but like any people who are feared and reviled, they still seek the very human things that we do – love, companionship, self-worth. It’s another complex tale where good and evil should be very cut and dry, but the struggle in that gray area between them just cuts out your heart. No issues with this one – just buy both books at once to get the full effect, and hope he either signs for the third or self-pubs it soon.