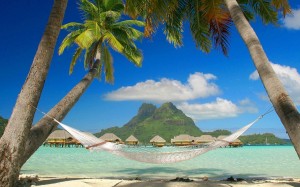 A couple years back, I had an old high school classmate email me out of the blue and ask if I could offer him some tips on writing, because he really wanted to be a writer so he could “Work from anywhere and make money typing on the beach in Hawaii.”

No, really, that’s what he said.

This email made me so angry that I just deleted it without a response.

By that time, I’d been trying to make a living at writing for nearly fifteen years. I’d gotten over a hundred rejections and stopped keeping count. The times that people spent going to parties or having real hobbies, I was writing crappy short fiction and banging out bad novel drafts and copyediting business correspondence and writing press releases.  And I sure as hell wasn’t doing any of that from a comfy chair on the beach. In fact, much of the writing I did was from my parents’ den or a cockroach infested flat in South Africa or an incredibly dark dorm room in Alaska where your nose hairs froze when you walked outside.  I didn’t write because I thought it would give me any kind of freedom. I wrote because it was fun, and cathartic, and it was something I was starting to get good at. It beat cleaning dog kennels.

But I guess what really bugged me about the former classmate’s email was not that he assumed that writing was great because you can do it anywhere (it is and you can) but that writing itself was some kind of hobby vacation… that writing isn’t work.

Later, I got a technical writing job where I wrote policies and procedures and training and software manuals. I got that job because in other jobs I’d been copyediting those same types of documents – it turns out that copyediting so many of my own manuscripts over the years translated into a real-world skill. Then I wrote business blog posts and press releases and internal correspondence. I took up freelance work doing resumes for $25-75 a pop (that rate has gone up substantially, because I’ve gotten very good at it).  This became a marketing gig where I wrote brochure copy and online ads and full-page trade ads.  When I wasn’t paying attention, I ended up writing radio and TV ads, short training and inspirational video scripts, the crazy language of SEO, optimized blog posts, and started maintaining business social media accounts. Now I spend much of my time creating marketing emails, reg pages, web copy, literature sheets, and online and trade ads, and I make a very reasonable amount of money at it.

Much of my success in landing increasingly writerly jobs was simply earning a reputation as “the writer” who could “write anything.” I could write quickly and competently to deadline, even some wildly insane deadlines like, “Fifteen minutes.” Sometimes I even wrote things that were pretty good, and performed well.

But that didn’t just “happen” one day. It was me leveraging what I was learning on my own through fiction writing in my everyday administrative job life, and slowly building up the skills I needed to fake my way through my first official all-writing, all-the-time job. When somebody comes up to me and asks, “How can I become a writer who makes a living at writing?” I often don’t know what to say. How do you condense your own 15-20 years of writing experience into some nugget for somebody who wants a get-rich-quick-scheme, not actual career advice? And that’s honestly what kills me about a lot of people who approach me asking for advice. They don’t want to hear, “Write things for 10 or 15 years so you become known as ‘the writer’ among your friends and can take on increasingly challenging work.” They want to hear “Read this book/publish a blog post on Amazon and make a million dollars.”

And it’s just… it’s not like that. It’s like asking somebody how to become a dancer, or a brain surgeon, or a physicist. It’s like, “Well, work real hard at it. Duh.” And nobody believes you. Instead, they all run off to get MFA’s or publish the first thing they wrote on Amazon and gleefully await the money to come pouring on in. 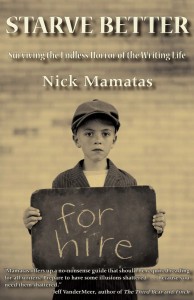 That’s why I enjoyed Nick Mamatas’s book, Starve Better, so much. I’ve been following a lot of his online rants about writing – real writing, writing for money, for rent, for food – and I knew this compilation would contain all the sobering, gut-punching, garret-living, real-world advice that folks who really, truly want to make a living off writing need to know.

I was not disappointed.

I think this book should be required reading for every single person who takes a creative writing course. Not just MFA programs, but right out the gate, during those first few creative writing courses you take with those people who are bringing the same three poems to every class, or writing about the décor in their dorm, or who spend the entire session critiquing the one sentence in your whole story with the typo, or the weird construction they didn’t understand.

Because this is the book that reminds you that writing is work. That it’s something you can (and really should) do for money. There are pointers on how to get better, sure, and stop writing the same “good” crap that everyone else is writing so you get noticed. But for me, as somebody who’s been coming to grips with the business end of writing the last couple of years at both my day job in marketing copy and my night job in fiction, seeing somebody talk publicly about the shit that is the business end of this business is really comforting. It’s like, “Oh yeah,  you pick up crap work so you can get better crap work, then decent work, then good work, then great work.” You don’t just set up on the beach and watch the checks roll in (unless you’re writing Twilight fanfic).

And the fanfic thing brings up another issue I’ve been struggling with in this weird writing economy. Do I want to sell things, or do I want to be a good writer? Because as Nick points out here, those things are often – though certainly not always – mutually exclusive. You can write any crap you want and get published if you write it on time and you’re easy to work with. And that’s fine, if that’s the writer you want to be. We all have to eat.  And some of us will do both “competent, on-time work” and “very good, but maybe late” work in our careers. Cause we have to eat.  But what’s the end goal? Is it the beach? Is it being awesome? Is it being awesome on the beach? Because whoa boy, for me, being awesome on the beach is a very long way off.

The last few years, I’ve grown callous toward the fluttery, nice-sounding “free your inner creative spirit” type writing books that I read as a teen.  Those are great for luring you into the business, but they don’t give you a very good set of tools for dealing with the harsh realities of how to make a living. They don’t teach you how to find an agent, or negotiate contracts, or make a living freelancing while working on your novel. They don’t tell you how to make a living writing at all, really, because it’s assumed that nobody does.

So if you want to get a peek into the bowels of the real writing life, and maybe figure out how to dump your crap job and make a living doing it (even if it’s not nearly so romantic as you thought, sorry), pick up a copy of this book.

If you’re a pro and already know this stuff, pick it up anyway. Misery loves company. I know I sure did.