Epic ConFusion Programming: WHY YOU SHOULD COME 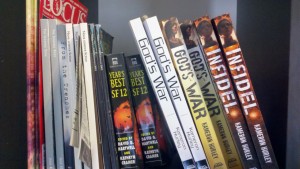 I’m leaving tomorrow for ConFusion. I don’t actually “know” a lot of people there, which makes this very unlike Wiscon, which was my regular con there for a few years.  That means I am very likely to be unscheduled for most of this con, so here’s where you can find me and – more importantly – why you might want to…

WHY YOU SHOULD COME:
Oh, come on, YOU DON’T WANT TO HEAR ME TALK ABOUT THIS WITH THESE OTHER COOL WRITERS? Most of the panels I’ve done have been at Wiscon, which means this panel is pretty much up my alley. Prepare for heavy ranting, when I’m not deferring to the far more interesting things my fellow panelists will be saying. If you’re a fan of GOD’S WAR/INFIDEL and you’re interested in my take on just how vital I think these things are to creating a believable world, don’t miss it.

WHY YOU SHOULD COME:
For some bizarre reason, I will be moderating this panel. That means I get to ask questions like, “Who REALLY writes the best ensemble casts?” and “How do you choose which party member to kill first?” and “What’s the benefit of having the biggest asshole in your mercenary group survive til the end?” and “Why write a plot when you could write a killer party?” Ok, maybe I will be the only one excited by that last question. But for sure, I know we’ll have to talk about the lowest point your band-of-rogues/adventurers can get before they throw in the towel. And how we push them to that point. Muwhaha hahaaha.

WHY YOU SHOULD COME:
Besides the fact that I’m here to blather on about worldbuilding and why pseudo-European-medieval may not be the most inventive, fantastical way to go, you’ll also have the chance to hear from folks who do actual Middle Eastern-type settings instead of post-apocalyptic settings like me – Howard Andrew Jones and Saladin Ahmed have written some lovely, evocative stuff. Come listen to us chat!

WHY YOU SHOULD COME:
Because Night Shade isn’t at this con and I’m not sure how many vendors are going to have copies of my books, I’ll be bringing exactly 10 copies of GOD’S WAR and 10 copies of INFIDEL to the signing table for $10 a piece, so if you’ve been having trouble finding a hard copy, here’s your chance.

Really, though, you should come to sign and chat because there is nothing worse than sitting around behind a desk twiddling your thumbs while everybody lines up behind Rothfuss and Abercrombie.

WHY YOU SHOULD COME:
Readings tend to be lonely times (EVEN LONELIER THAN SIGNINGS, HINT HINT) so I am not above bribery. I will be putting names in a hat and giving away two copies of GOD’S WAR at the end of the reading.

Also! I’ll be giving the audience a chance to vote on what they’d rather I read: the first chapter of GOD’S WAR or a select, not-too-spoilery exclusive chapter from RAPTURE (which not even my agent or editor has seen yet).

WHY YOU SHOULD COME:
It’s a little-known fact that my Master’s Thesis was an examination of the propaganda used by the African National Congress to recruit female fighters during apartheid. I have a lot to say about the perception vs. reality of female fighters, and for the most part, I don’t bullshit about it in my fiction, either. We are all, I take it, folks who write about women who fight – and not just metaphorically. Kristine Smith’s Jani Kilian books are many, and feature a fine fighting heroine. And Jim Hines… well, Jim Hines is this guy. I mean, do you really want to miss that?