In this irregular series of posts, I want to highlight some of my favorite fantasy epics – gritty and otherwise – of the last twenty years.

I discovered Paula Volsky’s Illusion the traditional way – it was recommended by a friend in high school, who fairly forced it into my hands and said, “You need to read this.” Illusion was a revelation.

It was the first book I recognized as taking historical events and meshing them with a rich secondary world. In this case, Volsky took events of the most famous of the French revolutions and put them into a world with magic and caste systems.

Watching Eliste, a young noblewoman obsessed with her own coming out party while revolution brews around her, comes with it this impending sense of doom, as you know from the first chapter exactly where this is going. The young man working on her family’s estate who begins to foment rebellion has a similarly expected change in his station. The nice part about having a sense of how badly things are going to go is that you can spend more time getting caught up in the extraordinary worldbuilding and characters, happily eating popcorn while you wait for the rug to get torn out from under them.

Volsky is a writer after my own heart.

Make no mistake about what this book is about: this is a book based on the French Revolution, which means heads roll, palaces burn, mobs tear people to pieces, and Eliste’s world goes from cakes and gowns to bread and blood. Shit hits the fan, and fortunes change dramatically throughout this book, and the world opens up  I’ve always loved Volsky’s rich worldbuilding, which she doubles down on in her other work, including The Grand Ellipse and The Gates of Twilight.

Volsky’s last book came out in 2001 under that name, but she has since launched a new series under a pseudonym, Paula Brandon, beginning with The Traitor’s Daughter in 2011, which seems to have been mistakenly marketed as romance, and made a bunch of readers angry.  In an interview, Volsky talks about the inspiration for this setting:

“I had a general, fuzzy image of Renaissance Italy–city states; Fifteenth Century level of technology, more or less; names with an Italianate sound, sometimes. But it’s only the slightest flavor–a starting point for my own ideas about a place called the Veiled Isles.”

And from another interview, more evidence that Volsky and I could totally be friends:

“When I was nearing the end of the third volume, and finally wrote and completed the climactic death scene toward which I had been working over the course of hundreds and hundreds and hundreds of pages, I leaped up from my desk and went singing and dancing about my apartment. Fortunately, no one was around to witness this.”

Go pick something up from Volsky ASAP. I still stand by Illusion as the best book to start with, but YMMV.

I’ve just picked up The Traitor’s Daughter, and The White Tribunal over the course of writing this post. I’m not an addict. Not at all. 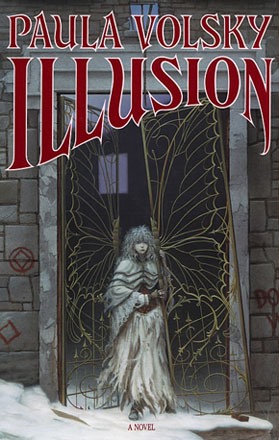