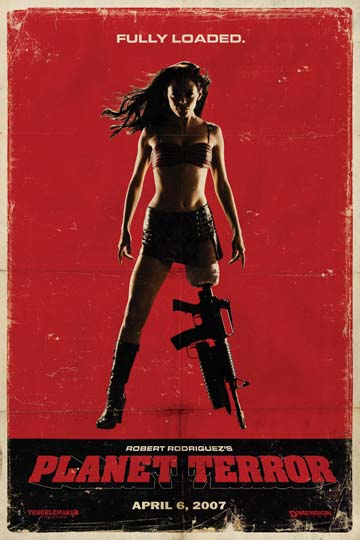 Like everything I’ve seen of Tarantino’s, Grindhouse is a rollicking good ride, but a disturbing, uncomfortable one that remixes cliches and then one-ups them by taking everything just that much further than anybody else does.

You want blood and gore? Oh, indeed, there will be blood! Buckets! Cheesy dialogue? You bet! Strippers with hearts of gold? Loads! Sharpshooting hero with the Mysterious Past? (I never miss!!!) Of course!

The first feature on offer is “Planet Terror,” which runs after a couple of previews for “upcoming attractions,” including “Machete,” an action movie about a machete-wielding Mexican assassin hired to kill a Senator who’s pro-immigration. Yes. It’s this sort of movie.

So, Planet Terror is a bloody, slapstick zombie flick complete with Iraqi scientist Naveen Andrews, who I’m sure some people actually do think is Iraqi cause he plays one on tv. But anyway. So Naveen is dealing with some ex US soldiers who were exposed to this zombifying gas. Now the only thing that keeps them from zombifying is small amounts of the gas. But the deal goes bad, there’s some castration (you know how it goes), and then the gas gets loose in small town Austin and… Planet Terror ensues!

Anyway, the “plot,” such as it is, really isn’t all that important.

In the meantime, Rose McGowan opens the film with a gratuitous go-go dance (“It’s go go, not cry-cry.” heh heh. Sorry, the dialogue is just great). Rose McGowan is pretty buff. And the dance is pretty gratuitous. Which is the point. Everything in this SF spoof blood bath zombie terror homage flick thing is supposed to be about 800 times crazier than in a “regular” movie. 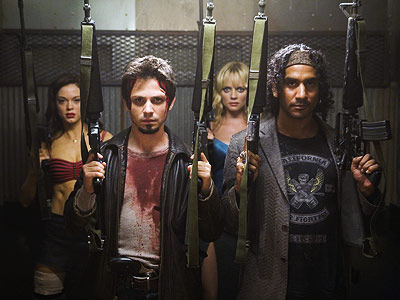 So maybe that’s what made the whole camera-devouring-half-naked-McGowan thing so uncomfortable for me. I really want to love all of of the cliche-fucking stuff, the over the top blood and gore and SF ridiculousness and hyper-masculinity and silly femme fatales and their lesbian lovers, and mostly I do, but…

You know, I was reading one of Patrick’s posts where he pointed out to a board commenter that both male and female characters in Jade Empire are dressed in rather revealing clothing, and he argued that if you complain about one character’s dress being provocative, you have to admit that the other one’s is, too.

Though I don’t personally think either character’s poses and clothing choices are terribly provocative or objectifying as gaming characters go (they were pretty tame, really), male skin is still treated differently than female skin, usually in the posing. Not only are the guys already being presented as, well, men and so have that whole male priviledge thing going on, coming from a place of relative power over women, socially, but when a guy takes his shirt off and strikes a pose, it’s never the pose of someone being looked at but somebody who’s looking. Or posing to intimidate, not to sexually excite. Taking off his shirt isn’t an invitation to be sexually ravished, it’s an invitation to size him up for a fight. If he was posed the way women usually are, it’d look something more like this. But probably more skin. I’m thinking thongs and assless chaps.

So the hyper-cliches in the movie really do a lot to show off the sexism inherenent in the cliche standards themselves. You can let it go in Casino Royale, but during the sex scene where our Hero takes off his shirt, and the camera spends all of its time lovingly licking over McGowan’s body, not the Hero’s, it’s tougher to pretend that it’s all just good fun and totally normal. One of the things that happens when you turn up the dial on movie cliches in these sorts of movies is that it forces you to look some of the absurdist sexist crap in a real stark light, too. It doesn’t get glossed over as “Well, you know, action movie, whatever.”

Anyway, McGowan does in fact lose her leg to zombies at one point. For better or worse, this is the highlight of the show, cause her Boyfriend with the Mysterious Past (TM) retrofits her with a machine gun in place of her leg, and so she gets to weild bloody revenge on the zombie hordes. And though her Boyfriend with the Mysterious Past (TM) may not make it, he does of course, Go On. Cause he Never Misses. The Holy Womb allows him to carry on.

But I really didn’t care, cause she had a machine gun for a leg. I’ll forgive a lot.

Most people (including me) liked Planet Terror better than the second offering, Death Proof, though this was the one that made the most of the cliche-fucking. Unfortunately, Tarantino takes his own sweet time getting there, and after all the blood and gore and suspense and booty-shaking in the last movie, you’re not really sure what to make of this one until, like, the last ten minutes.

This one was a tough one to watch. Kurt Russell stalks a bunch of women who are out having a night on the town. Tarantino spends a lot of time letting you get to know the women, their relationships, careers, gets you to at least sympathize with them if not like them, and talking, talking talking while they’re stalked by this guy in a big black car. Rose McGowan shows up again, getting hit on by the stalker and eventually going home with him.

She doesn’t make it home, of course. He has a stunt car with a closed-off passenger seat, and straps himself in while allowing her to go unbelted, then kills her with some fancy driving. It’s bloody and stupid, especially after you just watched McGowan machine gun a bunch of zombies in Planet Terror with her machine-gun leg and lead a colony of survivors in Mexico. I mean, really.

Said stalker then bashes his car into the car carrying the four women you’ve spent half an hour getting to know, and they all die a bloody, horrible, dismembered death. There’s sex and drugs in there, too, which is another of the reason’s he’s able to get away with vehicular homicide.

So, movie keeps going, and now he’s stalking another group of women. I’m really uncomfortable by this point. I hate stupid bloody needless stalker violence against women. Probably for personal reasons. I mean, getting killed by nerve-gas zombies is one thing, but killed by crazy stalker hits a nerve.

Anyway, so here are four more women you’re getting ready to watch die horrible, bloody, needless deaths because they’re out having too much fun instead of staying home sucking cock in the kitchen.

But these women are a little different.

This *is* the same guy who wrote Kill Bill. The first one was good, anyway.

One of the women, Kim, is a smart-talking stunt woman who carries a gun. Zoe is another stunt woman with “cat-like” agility who’s a gearhead New Zealander. There’s an actress cheerleader type tagging along for variety and Rosario Dawson, who is some sort of cameraperson or something.

Anyway, this bunch wants to con a car out of guy and go stunt riding with it cause Zoe’s always wanted to stunt ride on this certain kind of car (no, I’m not a gearhead. White thunderbird? Some car. Anyway). So Zoe, Kim, and Rosario Dawson leave the cheerleader behind to entertain the car owner and take the car out, attach their belts to the window frames of the car, and Zoe lies down on her back on the hood, hanging onto the belts on either side, and Kim drives like a bat out of hell down the back roads of Austin with Zoe freeriding on the hood.

Kurt Russell the stalker is in pursuit.

It’s got all of the elements for Gory Female Death. Independent-minded women in tight clothes who talk about sex and con a guy out of something – ie act like bad girls – and go out joy riding and having a good time while being stalked by crazy white guy.

I kind of wanted to leave just then, cause if this was all Tarantino had to offer me, I’d call Planet Terror worth my $7 and leave it at that.

But it turns out these women have guts, and when he finally runs them off the road, Kim pulls out her gun and shoots him. He’s injured, but manages to drive away.

All the women – still alive, miraculously – hop back into the car and gleefully decide to go after him.

And the hunter becomes the hunted.

It was a fun little reversal, and being a rah-rah women need to be strong and fearless and defend themselves sort of person, I thought it was a cool money-shot there at the end, but I don’t think the preceding 80 minutes of the movie were really worth the ten minutes at the end. I was also concerned about that whole potential message of the, “Well, if women fought back they wouldn’t be raped/killed so if they are, it’s their fault,” thing, which does come up in a conversation among the heroines before the stalking. Kim – the gun carrier – insists that it’s her right to do her goddamn laundry whenever she feels like it, and she’s not going to avoid her building’s basement at midnight cause she’s scared of getting raped. She’d rather pack a gun.

I’d rather guys just didn’t rape and murder people. But you know. You do what you gotta do until we live in a culture where that’s not OK. I’ll keep lifting my weights and going back to boxing lessons as soon as I’m employed.

To sum up, there was good stuff here that entertained and even got me thinking about how fucking stupid the whole “bad guys rape women!” cliche is, and how tired I am of seeing go-go dancers without machine guns for legs, and stuff like that. I learned that Indians are Hollywood’s best stand-in for Iraqis, and I take Rosario Dawson much more seriously when costume designers don’t dress her like a fourteen year old.