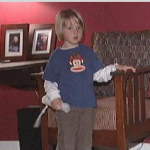 I don’t generally like to mix my personal blog with my day job life, as it’s a good rule of thumb to keep the two separate. However, being somebody with a chronic illness that most folks get when they’re kids, I have a soft spot for kids with chronic illnesses. I also have a blog that some people do, on occasion, read (especially when I’m ranting about Urban Fantasy, apparently).

My boss’s son, Jude, has been suffering from an undiagnosed neurological condition that looks a lot like epilepsy – but all the tests have come back negative, and the drugs for epilepsy don’t work. It sucks even more in this case because it’s a kid, and it’s tough for a kid to tell you what’s wrong/what he’s experiencing. They have spent many years, many doctors, and many, many dollars trying to figure out what’s wrong with him and if there’s anything they can do to help control his episodes. You all who’ve followed my frustrations over health insurance claims and benefits and dollars over the last four years may have some idea of what that’s been like for them.

I know SF/F circles move in and out of health offices quite often, being the sorts of people prone to chronic conditions and terrible health (one of the reasons we turned to SF in the first place, come now).

Please take a look at Jude’s story and pass it on if you’re so inclined. Getting the latest cat picture to the top of Digg is all very well and good, but it’s helping out people like this that is the real power of social media. Let’s see if somebody knows somebody who knows somebody who can help.

You can contact David and/or learn more at his blog.