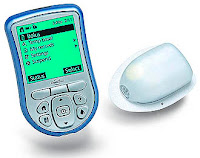 So, I’ve had the Omnipod for about a year now (as of July).

Except for a truly horrifying batch of pods that arrived during month 4, it’s been a pretty liberating experience. You don’t realize just how liberating until you have to go back to shots for a day or two and all your math is fucked up and you have to start recalculating and calibrating everything at mealtimes in order to fit in your workouts instead of just, you know, dialing into the PDM exactly how little or how much insulin you want.

See, after a year of being hooked to my PDM like – well, like a diabetic person who relies on it to live – I lost it yesterday somewhere between my office and the bike rack downstairs.

I still have no idea how this happened. I had it when I did my post-lunch correction. But when I leaned over to put my bike chain my backpack – no PDM.

See, other insulin pumps are totally hooked up to you. They have this long tubing connected to their control unit, which is hard to lose. Omnipod is different, which is why I love it. I can run around, work out, go swimming, whatever, with no tubing sticking out. My PDM communicates wirelessly with the actual insulin pod that’s stuck to my skin. You only need to be near the PDM when you’re bolusing or when you’re changing a program (creating a temporary basal rate, suspending or reducing basal rate in anticipation of a workout, etc.). The rest of the time, the pod that’s attached to you just doles out insulin according to your pre-programmed schedule.

So, I wasn’t totally fucked when I lost the PDM. I was still getting my basal insulin. But the PDM is also my glucose monitor. And the PDM controls all of my boluses. So after spending 45 minutes searching my office, the foyer, the elevators, the entire floor where my office is located, I swung by CVS.

Now let’s go through just how much $$ it takes to keep me alive.

I spent $75 on a glucose monitor that I *thought* was compatible with the testing strips I already had. Got all the way home only to discover they were not.

Spent $75 on a vial of 50 testing strips (the smallest amount they come in).

When I called up Omnipod, I was told that replacement PDMs cost $400.

I was getting pretty hysterical by this point.

Lucky for me, the rep was just giving me my options.

“Our new model is also out,” she said, and then she said something that I swear to god sounded like, “One thousand forty nine ninety-five.”

I’d been wondering how long this would take. If you can buy a cell phone for under $100, your wireless medical hardware controller shouldn’t be $400 (I have since learned that $150 is the “upgrade” price for existing customers. It’s over $900 new! SRSLY? C’mon).

She transferred me to shipping. He said, unfortunately, they were totally out of the new model (this was why the rep initially quoted me the old model price). They could ship it Monday, tho.

Queue me hyperventilating again. Because, see, you have to change your pod every three days. The one I was wearing was only good another two days. Then it was all Lantus shots and wonky guessing games again – that meant three days of adjusting to that, then another three days to get used to the pump again when it came in. It meant wild-eyed, bitchy-ass Kameron for at least two weeks.

“Let me call the local rep in your area,” the shipping guy said. “She should be able to have one you can borrow for a few days.”

I hang up thinking it’ll be a few hours before I hear anything. I’m already formulating contingency plans.

Instead, the local rep for my area calls five minutes later and says she’ll drop off my new PDM at noon. “It’s an old model,” she said. “Just keep it. I’m a t1, too. I just got back from Italy, and let me tell you – it’s really, really good to have a backup!”

By 1pm – less than 24 hours after losing my PDM – the local rep had dropped off a new (original model) PDM at my house with J. I was able to come home from work and change out the pod without a problem using my new PDM.

Monday, they’ll be shipping me the new model next day air, and I should get it Tuesday.

After the hell of dealing with insurance companies, I expected similar crazy treatment from Omnipod. Because it has to do with medical stuff, I conflate my experiences with the insurance company with my experiences with Omnipod. In fact, the folks at Omnipod are pretty awesome. I always get a new pod within 3 days when there’s an error with one of them (and the failure rate is down to the promised 1-2% now, as opposed to that three months of horror when I experienced the 20% failure rate), the reps on the phone are always great, and… and this. Well, this was just amazing.

Because… you know what? I hate this illness. I hate it. And what I hate more than anything is being reminded of just how incredibly weak and dependent I am on the good will of other people. It’s an incredibly weak and vulnerable place to be. I’m not shitting when I say I was hyperventilating on my way to the pharmacy to get some replacement hardware to get me through the night. I keep repeating my, “I’m fine,” mantra the whole time. I was suffused in this incredible, deep, ridiculous fear. When Jay Lake talks about The Fear, about getting hit with The Fear… yeah, I have an idea of what that feels like.

I’m horrified and embarrassed at how totally and completely I’m taken out when this vulnerabilty gets hit. I managed to not break down until after the local rep called back and said I’d have a PDM the next day.

Then I knew I could lose it. Once the crisis is averted, yeah… then you can totally fucking lose it. And I did. And it felt really good to lose it, because it was a crushing, penetrating, breathless fear that I never want to feel again, but that I know I’m destined to deal with because… because this is what I’ve got.

In some ways, I think I haven’t come to grips with chronic illness yet, with what it means. Especially when you’ve got the pod, you can pretend you’re really normal. You can do stuff without too much planning. You have fewer lows, you get more exercise. You don’t have to haul out a whole shoot-em-up-kit whenever you sit down to a meal. You just pull out this PDM that looks like a cell phone, bleed on it, punch a few buttons, and you’re done.

You’re allowed to forget – for weeks at a time – just how incredibly vulnerable you are.