Remember When Fantasy Books Were AWESOME? Thoughts on The Cloud Roads 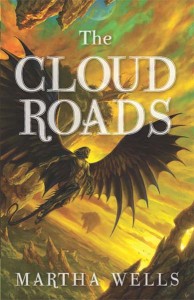 Remember when you were 9 and or 10 or 12 and you stayed up until all hours reading your favorite fantasy novel? Remember that strangely comforting feeling of slipping neatly and completely into some other place and so totally embracing the story of another person that you were engrossed until the sun came up? You remember that sense of awe and wonder when you encountered fantastic peoples, creatures, vistas?

Oh, sure, I enjoy reading now, to a point. Mostly, though, reading is drudgery for me, filled with lots of interesting but in-need-of-help first novels (including my own), and lazy writing, and plot holes, and all those other clunky things that jerk me straight out of a story (no matter how engaging) and fling me back to planet earth. I didn’t experience that much when I first started reading the genre, but after a while, you read and critique enough stories and you start to see all the crappy holes in them, and it sucks the enjoyment right out of the story.

I’d heard Martha Wells had some new fiction out, and being a fan of her book City of Bones, I decided to go ahead and check it out (also, we now have the same agent. Once again: my agent has such good taste!).

I had some trepidation, initially, because I knew this one was about a flying shapeshifter, and the last “weird” book I read with a flying hero was Steph Swainson’s Year of Our War, which – despite the interesting world building – I hated because the main character was a whiny, drug-addled and totally uninteresting person. So I had my biases going in about what was going to happen with some flying loner guy.

I should not have worried.

The Cloud Roads is the story of Moon, a shapeshifter (again! Not exactly one of my favorite things to read about in my fiction, due to how overdone it is) who is uncertain as to what kind of creature he truly is, as he has encountered no one of his kind before. He exists in hiding in his “groundling” or non-flying form, which more-or-less allows him to mix with other types of groundling races of – literally – all colors, types, stripes, and creeds. Because all the races are so different, and there are so many, he is not seen as too terribly out of place – unless he shifts. Because when he shifts to his flying form, he reminds others of a disturbingly violent race of baddies known as The Fell, who make it a habit of eating groundlings and destroying their cities.

One of the things this book does well is paint a picture of that classic odd-kid-out who’s used to being betrayed and bullied, and has grown up his whole life not only knowing he’s different, but knowing he will be actively hunted and possibly killed for it. I’ve heard some folks say that this would be a great YA book, and I can’t disagree with that. It’s a story about finding your place in the world, and the heartbreak of losing everything you love and trying to trust people again. This whole concept could have gone over syrupy-sticky, but instead, the way the protagonist, Moon, is presented was terribly sympathetic without being sticky. It reminded me a bit of how Robin Hobb’s bastard boy was introduced in the Assassin books – someone who simply ended up being in the wrong place at the wrong time, and crapped on by everybody else because of how he was born.

Though Moon is pushing 30-something, his race is long-lived, so the fact that he is emotionally still a bit of a child is understandable – it doesn’t help that he’s never had to socialize with his own kind, and has a lot to learn.

Moon does eventually bump into his own people, and discovers what he is, but the road to get there isn’t exactly the one you were expecting. What made this book really work for me was that it challenged your expectations of family groups and social structures (oh, PLEASE, guys, give us more books beyond the hetero family pairing!). Moon’s people are socially complex, and the Big Bad that the plot hinges on actually has to do with selective/forced breeding for particular powers (not the nicest thing in the world, and especially not nice after you’ve gotten to like all the characters).  Moon himself is also incredibly well-drawn in a way with a bit of a uniquely unreliable narrative turn involving his refusal to trust others.  This makes him not just wary of betrayal, but expecting it at every turn. It means that when he tells you what he thinks just happened in a scene… well, you learn quickly not to believe a word of what he says to you about what someone’s motives are. That said, his caution is sometimes dead on, and saves some folks from disaster. It is this – his resourcefulness and survival instinct – that really made me respect him.  He is a little heartbreaking, and broken, but instead of that being a turnoff to him as a character, it makes your heart ache, because – for many of us – there’s that place inside where you will always feel like the outsider, unloved, like everyone’s going to betray you, and you start to cheer for Moon and hope for the best for him, even as he tries so very hard to just expect everything will fall apart.

This is a lovely book, with strong worldbuilding and sympathetic characters. The only real critique I have is that, for me, there were almost too many characters to keep track of toward the end (the folks involved in fighting the Big Bad are numerous, as in the end, his entire new adopted family comes under attack). Aside from that… well, really, I don’t finish a lot of books these days, and few of them are so seamless or engrossing. And none have tapped into that adolescent love I used to have for fantasy fiction so strongly as this book did.