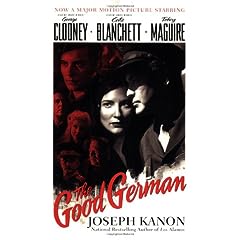 I picked up a copy of The Good German at Heathrow, mainly because it has this winning first line: “The war had made him famous.”

This is a beautifully written thriller set in Berlin just after the German surrender during WWII. The novel revolves around the murder of a nobody American soldier (in the Russian-occupied part of the city) after the “peace,” and one American journalist’s interest in getting the story. The reason our journalist hero has come back to Berlin, however, is to find his married lover, whom he left behind during the war.

The two stories end up connecting, of course, as they would in any good thriller, and the strength of the setting here really sold this one for me.

Even better than that, it’s beautifully plotted.

One of the big things I’ve been working on – and reading for – is plot. It’s another reason I was blazing through Stephen King novels last year. Watching somebody place their pieces and then neatly set them off like a line of dominoes is an exercise I find terribly satsifying, probably becuase it’s something I find incredibly difficult to do in my own writing.

Character, setting, sure, lovely, but plot? Knowing where I’m headed before I get there? I still write plot the way I live my life: messy and disjointed and whatever feels right at the time.

I think both my life and my writing may perhaps do a bit better with some structure.

Then again, most real lives aren’t so neatly plotted, and you don’t get a six-page Sherlock Holmes description of events and motives at the end. How comforting fiction can be, with all those loose ends tied up so neatly…

All fiction is comfort fiction.