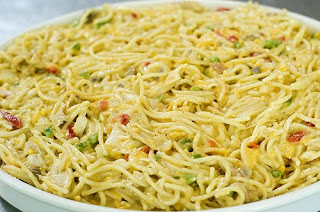 No, this is not my photo – I’ve totally stolen hers. But mine actually almost looked like this! Only in a wok! (I really need to get a proper digital camera).

I swapped out the spaghetti with spaghetti squash to make it diabetic friendly and added about twice the amount of red pepper and seasoning salt that she has in her recipe. I also just cooked up four chicken breasts in a cup of chicken broth instead of boiling it off the bone because, srsly, I just don’t have the kitchen hardware to do that (read: big ass pot).

This actually turned out really well. I knew this was the recipe for me when she’s like, “Now add 2 cups of cheese! OK, now top the whole thing with another cup of cheese!”

Dinner was tasty. It’s all boxed up in the fridge for lunches and dinners this week.