What It’ll Be if You Listen to Them All 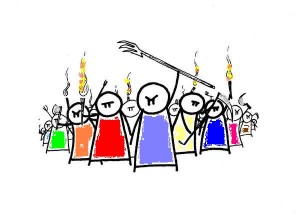 I just read something this week from somebody who said their goal this year was to write something that would “win some kind of award” next year.

If you are writing books to get awards, you may want to rethink your priorities.

When I first started writing stories for publication, I wrote a lot of characters studies where people sat around and talked to each other a lot, with maybe the occasional cockroach. I remember one of the editors at Marion Zimmer Bradley’s Fantasy Magazine scrawling across the top of one of my stories, “Cockroaches put me off lunch.”

So after a half dozen of those dismal rejections, I tried to write stories that I saw in the magazines.  At the time, that meant I wrote a lot of sword and sorcery knock-offs. They lacked actual plot, which was, you know, a problem. But worse than that – they were kind of boring to write. But here I was, spending the entirety of my pre-teen and teenaged years hunkered over a keyboard transcribing work from dozens of notebooks I’d scrawled stories in during class, just so I could write something that I hoped was syrupy enough for somebody to like it.

Oh, sure, I get it – this is basically what writing and publishing are about. Being “published” in the traditional sense means that somebody liked your stuff enough to invest in it. That’s flattering. It’s nice.

But it shouldn’t be why you write. Because unless you’re independently wealthy, you’re going to be spending the vast majority of your life engaged in some kind of pursuit that makes you utterly miserable. Life is too short, folks.

It wasn’t until I kinda went, “Fuck it” and decided to write the kind of book I wanted to read that I had some success with it. I think it’s easy to forget, looking back, that GOD’S WAR was the third novel I actually shopped, and the ninth one I’d written. I’d also argue that it wasn’t the most ambitious book I tried to write, either. I’d gotten hip deep into a sweeping epic fantasy saga originally outlined as fifteen books. The first in that series was over 200,000 words. There were some clever locusts in that book, and magician-priests, but I didn’t have the technical skill to pull it off.

Even GW is kind of a wreck, especially when it comes to plot and structure. Some of this is because I’d actually written the opening fifty pages just to get a handle on the world and the character, and then I sort of backfilled a plot in around it.

GW had a rocky road both in its writing and its publication. I wrote it during the year I was dying from what turned out to be an incurable chronic illness (go me!), and spent several years in revision during which time I lost my job and became homeless and moved to a new state. Thus began a series of temp jobs, sad and broken personal relationships, medical debt, and other fun stuff. The book was my therapy. Building a world of shit that was shittier than my failed life really helped put things in perspective. Writing about somebody who had the pure strength of will to get up after being punched down repeatedly was pretty satisfying, too.

It really is true that when you have nothing to lose, it’s easier to give yourself permission to do anything. So that’s what I did. Bug magic? Sure. Bisexual heroine? Why not? Matriarchy? Of course! Non-white protagonists? YES! Old-school biblical violence? You betcha! Also… aliens and spaceships and sword fights and organ dealers and boxing, oh my! BECAUSE I’M DYING AND LIFE IS SHIT, PEOPLE, SO WHO THE HELL CARES?

Now, don’t get me wrong. This book was a tough sell. Shoving all that crap in there made a lot of publishers nervous (“How will I market this??”). And once it was published, it put a lot of readers off. But I wrote the book for me first. I wrote it because I wanted to read this book, and nobody else was writing it. Where were my scary heroines and organic tech? Where were the matriarchies that were just as unbalanced and effed up as the patriarchies? And wouldn’t ancient Assyrian/Babylonian terror tactics go really well with a Mad Max future?

Ultimately, sure, I wanted to see this book published. But I don’t know that I ever wrote anything with the idea of hoping it would “win some kind of award.”  Why? Because that’s the road to madness, right there. Because if I’d sat down to write this book worrying about what everyone else was going to think about it (and at the end of the day, awards are based on the opinions of, you know, people),  then I never would have finished it. Or, worse, it would have turned out like some of the other books I wrote before it, where I’d dip my toes into some weird stuff, freak out, and then go back to the safe little “Gee, haven’t I read this before?” stories.

I’ll be the first to tell you that I’m not a very good writer, or even a very imaginative one. I’m just a very persistent once. Writing INFIDEL was much more seamless than GW, mainly because my life wasn’t so wonky when I wrote it, and I’d learned how to recognize severe pacing problems. I may have thrown out the original second half of that book and rewritten it from scratch, but I knew where everyone had been and where they needed to be, and I wasn’t trying anything fancy. Inaya’s chapters got folded back into that second half just like whipped cream in a cake, and I was surprised to realize how much stronger the pacing was for it.  Did I worry about what people would think of it? Sure. But I worried about that after I turned it over to my publisher, when there was nothing else I could do to fix it.

And the reason I did that is because I knew what that kind of pressure would lead to. People talk all the time about how difficult it is to write a second book, especially when the first garners a lot of attention (lucky for me, INFIDEL came out just six months after GW, when not a lot of people had heard of it). You start thinking more about what people think than you do about what should actually happen in the story. So before you know it, you’re missing deadlines, playing softball with characters you meant to kill, and deleting all those references to burying babies.

Maybe that will help win you some awards. Maybe it will help you sell a lot more copies. Or maybe it won’t.

Maybe you’ll have totally eviscerated your story for fear of what other people will think.

When I went to Clarion West back in `00, we were asked to revise our story from week two in week six. My week two story had gotten a lot of strong reactions from people, including one of the instructors, who said he found it “personally offensive.” The responses freaked me out so much that I basically gutted everything the least bit offensive from my story, and there was no more bloody abuse and a much softer heroine and softer setting. I figured that this was it. This was SURELY the story I would take away from Clarion and have published, now that I’d smoothed off all the stories edges.

But instead of the cheering back-slapping I expected, I got person after person telling me in rather low, sad tones that that not only had softening the story not fixed what was wrong with it, but I’d managed to scrub it completely of the compelling elements that made it worth reading in the first place.

It’s likely no surprise that creating that revised story wasn’t nearly as satisfying as the original for me, either.

Clarion was good for me for many reasons, but that was the biggest writing takeaway for me. You can’t please everybody. And if you try and please everybody, you’ll please nobody. Including yourself.

At the end of that critique session, Patrick Weekes, one of my Clarion classmates (and now one of the incredible writers working on the Mass Effect games for BioWare) drew up a little doodle that neatly summed up the lesson from this critique. I framed the original copy and now have it hanging on my wall, to reference every time I start to lose my nerve.

I’ve recreated it below for your reference: 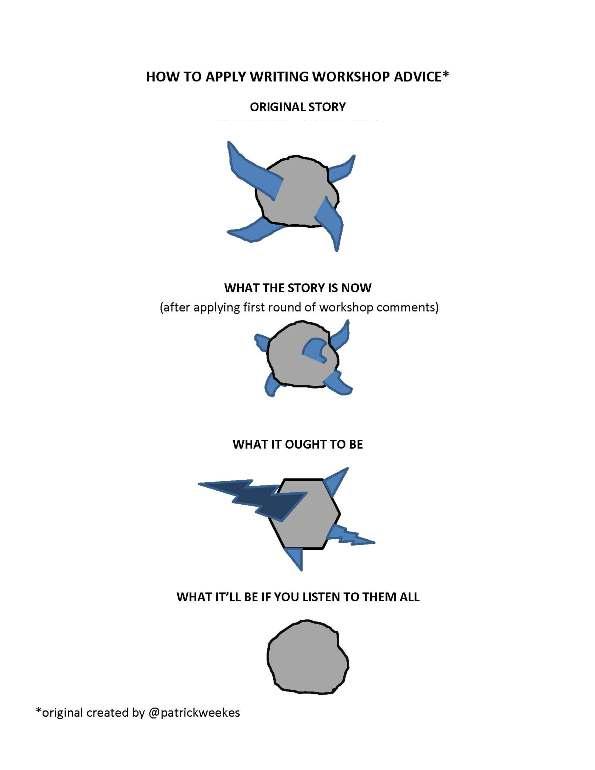 That was as true then as it is for me today as I finish up my draft of the third and final of my Nyx books, RAPTURE. It’s a book that won’t be for everybody. It will piss some people off. But at the end of the day, I’m writing the book I want to read. And for me, as somebody who knows how short and brilliant life can be, that’s really all that matters.