Women, Guns, and Gods: The Horns of Ruin 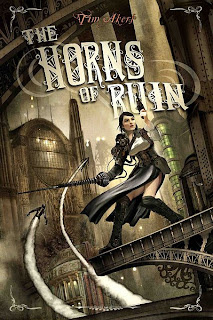 I found Tim Akers’s last book, Heart of Veridon, by accident at the local bookstore. I enjoyed it so much that I eagerly awaited his next book, The Horns of Ruin… until I read the back cover copy.

See, it had all this stuff that annoys the crap out of me. I’m not a fan of sword and sorcery, or stories about gods, or steampunk, so marketing “sword and sorcery meets steampunk” doesn’t work for me (your mileage may vary. Being in marketing, I know this is good marketing; I’m just not the target). You should know that right off before I go into my thoughts on the book. This wasn’t really a book I should have enjoyed.

But, you know, Tim Akers is a fucking great writer.

And when you’re reading great writing, you forgive a lot.

The Horns of Ruin is about Eva Forge, last paladin of the dead god Morgan. Her cult of Morgan is dying, and the man she’s sworn to protect is kidnapped. Great fantasy is about setting as much as the people in it, and the city of Ash is a lovingly detailed, creepy, and arcane city built atop a black lake. There’s a whole mythology here, with creepy beings you’ve never heard of and a huge, detailed history that’s spun seamlessly into the story. There’s no “pan to the orcs” or “well, you know how elves are.” Like VanderMeer’s Ambergris, this worldbuilding is done from the ground up.

One of the reasons I was willing to pick this up despite the fact that it dealt with living gods and sword and sorcery is also because Akers did something in Heart of Veridon that was really awesome: he presented the “gods” in that world as really, truly, unknowably alien. Gods became gods because they were creepy things we didn’t understand, whose motives could be anything from benign to sinister. You don’t know what exactly they are. Or where they came from. Or how you should relate to them. You simply build your faith around them in order to make some kind of sense from the freaky unknowable. When we don’t understand something, we kill it or we worship it. Which is especially fitting considering how this particular story goes.

At any rate, I figured that his take on gods would at least be more interesting than your standard fare. And I was not disappointed.

Ash has a very complex magic system based in… well, mythology and history. That is, the mythology and history of *this world,* not our own. The gods were regular guys once, three brothers who quarrelled and fought and backstabbed and won great battles and conquered the city. They were people, once, who amassed their power over time. The idea here is that godhood is something amassed over time. There are many potential gods – the successful ones are those who are able to best gather what may be a finite amount of power around them.

The analogy to real-life politicians/celebrities/robber barons is pretty stark.

I won’t pretend to know how the how system works – it’s a reasonably fast read. Suffice to say it felt very original for a sword-and-sorcery package, and it was cool watching power invocations in action. There are spells/invocations for speed and strength and battle moves. You invoke to draw on power. It’s spell casting seamlessly woven into the history of a place.

And it’s this, to me, that’s the real strength of the book. The originality of the magic system/casting, the mythology, the way it all ties together to create a city that’s very much Other. And did I mention the writing is really good? That means you get to dig your hands into the guts of this city, and it breathes on the page.

This is a spare little book. I say that because though the mythology is huge, it’s confined to one city. And the cast of characters is small. The plot’s very contained. I’m not sure why that felt odd to me – maybe because so much of fantasy fiction is about conquering the world, not making or unmaking a city.

The characters, unfortunately, felt a little spare as well. Eva is cool – guns, swords, massive power through invoking the strength/power of her god – but she doesn’t connect with much of anyone along the way. I know she’s supposed to care about her Fratriarch but just wasn’t sure… why. Because her cult is all she knows? I knew it because it was said, but for some reason, never felt it. It’s tough to write a warrior woman you can connect with. Like Del in Sword Dancer, or Monza from Best Served Cold, you have to cut away big pieces of yourself to make it as a woman and a warrior, to be taken seriously, but both of those books were very good at showing the heroine connecting – or failing to connect – or trying and failing and failing again – with people. And that made them not only interesting, but sympathetic.

Eva didn’t really try to connect with anybody. She tried to not hit people in the face because they could further her cause, but some bit of humanity was missing from her, and it made her a little flat. I would buy more of the “cold warrior woman” thing if there was any kind of “got to cut part of yourself away to succeed cause of, you know, sexism” thing at work, but… Thing was, in this world, I didn’t get that being a woman was an issue. Nobody really commented on it. It’s got one of those “assumed equality” things going on, which is always weird in fantasy fiction, since feudal worlds (even those that have moved on to industrial revolution steampunk) are nearly always exploitative. It’s cool if they’re not, I’m just always interested in why, and that’s not often answered in assumed equality world. I couldn’t really figure out this world’s social structure, since Eva pretty much just pounded in the head of anybody who got in her way (which was highly entertaining, yes, but did get repetitive). So I wasn’t sure how much of that stripping-away-of-self she’d really had to do to be taken seriously. Her cult/invocations gave her great power. People respected that. It was far more important which of the gods you worshipped than what your social class was. Thing is, there’s more than scholars and priests running a world, and though we saw a few random workers and got some lines from spear carriers, I wasn’t really sure how life was for everybody else.

Because Eva is so one-minded, she never connects with anybody, either. And that’s… troubling. I need to care about people in my books, and if there’s no love (even muffled), or guilt (even rationalized), or remorse (also rationalized), it’s harder to connect. Things glance off Eva like a stone skipping over a lake. This may simply be purposeful – she’s been raised to be one-minded – but it made it tough to root for her along the way, even though the fight scenes were cool.

For what it’s worth, the book does pass the Bechdel test (though barely), despite the small cast. This is primarily because Eva is paired up with a rogue scholar along the way who knows her own way around the city (the reason it’s “barely” is because they’re generally talking about how to find the Fratriarch, who is, you know, a guy. And the bad guys and gods are, you know, guys. So though your two primary characters are female, your entire supporting cast – including hordes of baddies – are guys).

Overall, this was a fast, entertaining read. I wanted to love it more than I did, and I suspect some of that had to do with not connecting with Eva. The story is so much in her head that it was hard to get perspective – either on her or on events outside what she believed was immediately important. The pacing was pretty breakneck, too – hardly any breathing/character stretching room between fight scenes. Though I was annoyed at some of the more “fan-fictiony” moments in Best Served Cold where the characters nattered on, I realize that what those did for me was make the characters far more endearing. At the end of the book, you feel like they’re your friends in the same way you feel about the crew of Serenity. Even if they’re your asshole friends who’d cut you as soon as look at you.

I wanted to be friends with Eva and the rogue scholar. But at the end of the day, they were ascending into something else, and leaving their humanity behind. It fits with the book’s themes, but was a little disappointing as a reader.

That said, there’s an incredible mythology here, great fight scenes, and some really stellar writing. If you want to go somewhere that’s actually fantastic for awhile (or if you ever wondered how cool it would be to have a sword with an “articulated sheath”) I’d give this one a whirl.