All Together Now: Writing and Managing Anxiety

At the end of June, I lost my shit.

GEEK FEMINIST REVOLUTION was due July 7, and last ditch copyedits were due on EMPIRE ASCENDANT July 9.  THE STARS ARE LEGION is due October 1.

And I still have a day job, folks. Day job 4ever.

I was, in a word: stressed.

I was also nearly out of the drugs I use to stay alive cause of my chronic illness, and my doctor wouldn’t re-up me until I came in for a long-overdue appointment. I’ve talked before about having anxiety and panic attacks related to going to the doctor, which is likely a mild form of PTSD, but it’s difficult to talk about what that means. Suffice to say it keeps me from going in as much as I should. It’s not that you feel uncomfortable or something, like it’s just some petty inconvenience. This level of anxiety busts you down at every level. It takes you out. It’s that you legitimately lose your shit. Like, you really honestly feel that you are having a nervous breakdown and are about a half a breath away from collapsing on the sidewalk screaming and having somebody haul you away to an institution.

I forced myself to get to my blood draw appointment where I was shaking the whole time, answering questions in a clipped manner because I was on the verge of tears. I worked myself up the whole time during the half hour wait, spending every breath trying to calm myself down so I didn’t start screaming there in the waiting room. I just wanted to scream and scream. I wanted to crawl out of my skin in the most literal way, by clawing it all off.

After the blood draw I hurried out of the office and then let out a big sob on the sidewalk, once I was clear of the doors. I started shaking and sobbing and hyperventilating. Seriously hyperventilating. I sat in my car for twenty minutes afterward, giving in to the attack until it passed. This was probably the worst attack I’ve had related to a doctor’s appointment since my hospital stay in 2006. It happened all over again an hour later after my proper appointment with my endocrinologist. Fabulous times.

If you’ve ever been through one of these, all you can think about is how fucking crazy it is. It’s like watching yourself from some great height where you know it’s an incredibly insane reaction to doing something as mundane as going to a doctor’s appointment. You know, intellectually, that it’s insane, but your body does it anyway. It’s incredibly frustrating. Anxiety attacks are fight-or-flight on overdrive.

Pretty much everyone in my family has some form of anxiety. Most are on medication. Those who aren’t use exercise and introversion and alcohol to manage it fairly effectively (and in truth, those on medication supplement with those other things too). Additional stress doesn’t help with managing this either, because the more stress that’s taking up your spoons, the fewer spoons you have to talk your body down from these. I had reached my breaking point with stress, and the doctor’s appointment set the whole thing off. When you are a raw bundle of nerves, it’s tougher to manage anxiety like this.

I tried to make an appointment with a doctor about this, like a good little modern day patient, but because I’m in America the Broken, all six doctors I called weren’t taking new patients. My endocrinologist had no interest in talking about anxiety, and referred me to someone whose soonest appointment was October.

I’m consistently impressed by how our healthcare system fails and fails again.

But if the medical industrial complex wasn’t going to help me manage this, then I needed to go back to caring for myself the best way I knew how, and that meant I needed some seclusion and some writing.

So I made last-minute plans to spend the long Fourth of July weekend at a cabin in the woods, alone. We’d just received a book check and could spare a couple hundred bucks; all I needed was fare for the cabin itself, as I could eat meals in and it was only a two hour drive away. The place had 70 acres of private hiking trails, and as long as I didn’t look too hard, I couldn’t see the other cabin on the property. I brought some stuff for grilling out, a lot of coffee, and a six pack of beer.  There was no Wi-Fi, and cell phone service was spotty.

I woke up to birds and mosquitoes and went to bed with birds and mosquitoes. I wrote a rousing epilogue to GEEK FEMINIST REVOLUTION while drinking beer alone in a clearing next to a roaring fire on the Fourth of July. I went on long hikes by myself where I didn’t see another person

I needed time alone in my own head, quelling all those outside voices, and making sense of nonsense; making events into narrative.

Folks have asked if I’d stop writing for a bazillion dollars, and you know: I wouldn’t. I couldn’t. The reality is that writing is how I process the events of the world. It’s how I stay sane. I am, at heart, an introvert, and introversion and writing do go well together. Not all of us are made for this fast-paced extroverted world. So much of my success has been learning how to navigate in an extroverted world as someone who is actively harmed by too much of it.

It’s extraordinarily difficult to live in this world, and I continue to look for ways to manage it more successfully. When my armor has been hit and hit and hit and hit by stress and deadlines, I’m susceptible to come all falling down unless I recognize it and take steps to mitigate it.

The secret is to know when you’re coming apart, and to take the steps you need to take to put yourself back together again. For me, that means seclusion and breaks from the news, from the voices online, from constant stressors.

When I came back from the woods, I turned in GEEK FEMINIST REVOLUTION and then EMPIRE ASCENDANT a few days later, and I didn’t feel stressed or anxious about it. I felt like myself again.  I’ve started wearing a Fitbit HR that tracks my heart rate, and you can even see the change in my resting heart rate from Before and After the trip; it was much lower after.

Folks talk a lot about taking care of yourself when you’re working at the pace I have to work right now, and that’s all very well and good when you don’t have my deadlines or my day job. I switched jobs back in January to a place with fewer rolling layoffs, and that’s been great at helping me reduce stress in that arena but the reality is there’s only so much you can do to take charge of your life; our economy is broken, businesses no longer care about employees, and trying to make a living publishing novels is like trying to make a living as professional gambler. 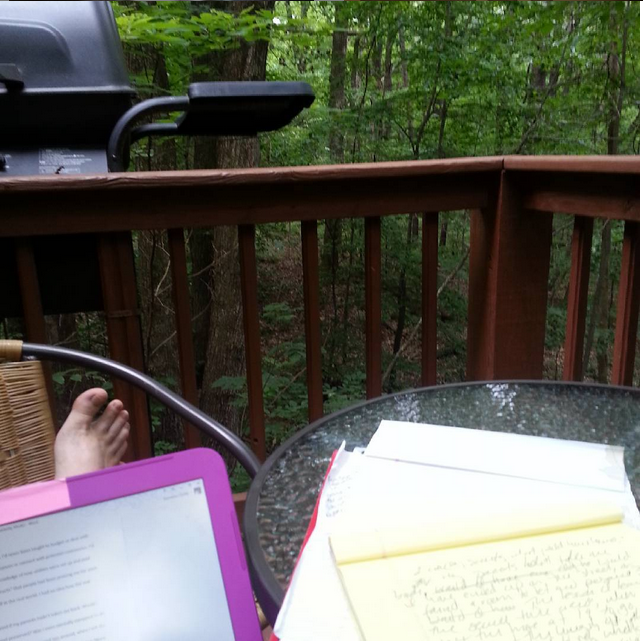 There is always going to be a lot of stress inherent in how we’re expected to make a living today. Always has been, really.

I admit I get frustrated with folks when they say, “Take care of yourself” as if they don’t realize the precariousness of most people’s financial situations. I’ve had a couple of good years now, and that’s swell, but two years does not a financial cushion make. I have come of age in an economy where folks are laid off every six months as a matter of course. All I have to rely on is what I’m contracted for right now.  As we shovel money into the hole of our debt and into convention appearances, I can see the end in sight, yeah. I can see a future that is not so precarious. But I’m not there yet, not until 2017, and until then I need to both manage my stress and my deadlines. Because it’s the deadlines that help us get there.

But in looking at my history – the chronic illness management, the recurring job layoffs (I’ve been laid off from nearly every job I ever had), my fractious publishing history – anxiety is actually a perfectly reasonable and sane reaction. It’s cause/effect. It’s not crazy or weird in the least. It’s just what happens when you get hit over and over again. Sadly, you won’t ever stop being hit. It’s something you have to learn to manage. And that’s something I continue to work on.

As a writer I know once said, “Life isn’t want happens to you. It’s what you do with what happens to you.” And that’s the mantra I’m trying to live by. It’s a life of moderated introversion and extroversion, travel and seclusion, words and deadlines.