So. I get it. The world used to agree with you. You used to be able to say things like, “I really like those lady writers in this industry, especially in swimsuits!” and your fellow writers, editors, agents, and other assorted colleagues would all wink and grin and agree with you, and Asimov would go around pinching women’s asses, and it was so cool! So cool that he could just sexually assault women all the time! You used to be able to say, “Black people are fine. As long as they are clean and don’t live in my neighborhood,” and your friends and colleagues would wink and grin and agree with you. You’d say, “Gay men are gay because they were abused, and all lesbians are really bisexual and just need the love of a good man,” and hey, it was Ok, because no one disagreed with you.

You came to believe that what you believed, and what you said, was true. It was the narrative. You felt happy and self-important about it, because you got it. Sure, you were tolerant. You accepted everyone! You just told it like it was. You stated your opinion. Maybe sometimes people said stuff like, “Well, maybe that’s kind of racist” but you just waved your hand and bellowed, “I’m not a racist!” and then stopped inviting them to parties. Problem solved.

In fact, everyone you knew agreed with you when you said these things, or, if they didn’t agree, they grinned and winked and gritted their teeth instead. In fact, a lot more of them likely gritted their teeth and bore it than you could ever imagine. But by stating your opinion without getting disagreement or pushback, a funny thing happened. You started to believe that your narrative was the only narrative. That your opinion was the sound one. The only one. Absolute, untouchable truth. 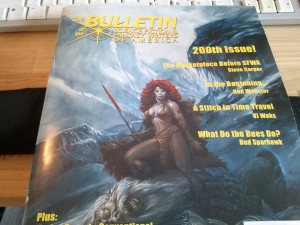 Well, welcome to 2013. And the world wide web, where everybody, even those underprivileged nobodies you never had to listen to before, has a chance to be heard.

Surprise. Not everybody agrees with you. In fact, many have not agreed with you for a long, long time and because you lived such an insulated life, only talking on forums with the same old people, about the same old things, you started to believe that nobody disagreed with you. You’d never even experienced what it was like to have the very people you were denigrating say to you, out loud, “You’ve gravely disrespected me.” And if they did, they were just humorless bitches, and nobody wanted to work with them anyway, and they weren’t in any power to impact your career, being little bitches and all, so you didn’t pay any real attention.

That was your privilege.

Worse, because you likely occupied a place of power in the hierarchy of the publishing industry, having a lot of books under your belt and a lot of contacts, nobody publicly disagreed with you. They feared the repercussions. They knew that you and your little groups of established pros could ruin their careers. They knew you’d call them mad, humorless, and not somebody fun to be around or do business with. So they sucked it up. They smiled. They played along. They drank whiskey and made fun of other women with you. You may not even have realized it. Because that was your privilege.

In order to do business in a biased, sexist, racist, fucked up industry, you have to plaster on your smile and nod when people say the most outrageously disrespectful, fucked-up things about you and people like you. When these dudes tell you it’s nice that you write novels but it sure would be nice if you had better tits so they could put you in bikini armor and slap you on the cover of their industry magazine for their buddies to leer at, you just smile, ha-ha isn’t that funny and get them another beer because you’re desperate to be in their upcoming anthology. Yes, I have a sense of humor! Please don’t boot me from this organization! I want to make this my career, so I will smile at every disrespectful sexist thing you say and pretend it’s totally hilarious! Because this is what I’ve been trained to do. It’s how I get ahead. It’s the only way.

I know this from experience. This blog has a lot more fucking teeth before I started publishing books.

And while these women or people of color are smiling at you they’re actively writing their own stories, and growing their own audiences, and hoping for the day when everybody finally stands up and says, “You know, actually, disrespecting half your colleagues and reducing them to a pair of tits or collection of bigoted stereotypes isn’t OK.”

But why? You might ask. Why’d people grin and bear it? Folks, we have to grin and bear it in an organization where 48 people voted for an organizational president who wanted to disenfranchise half the electorate. Women’s right to vote. In my own industry. In the one that pays me to write books. 48 people who were happy to publicly endorse turning me into a non-human. How many more were sympathetic to this? How many that I don’t know about?

I’m not immune to criticism on the internet. I’m from a privileged population, too. I’m white, and American, and middle class. I am adept at getting yelled at from all sorts of people. I’ve had people angry with me about racist and homophobic tropes they identified in my books, people brave enough to stand up and say, “You know what? This thing you did here? Did you see that? It’s not OK. It hurt.”

And you know what? That is not censorship. That is brave.

Let me tell you something about censorship and bullying. Because I’ve experienced that – what that REALLY is, too. Bullying censorship is death threats and sexual threats. Endless ones. Endless on a scale you cannot even imagine. It’s coordinated attacks from people who really would rather you were dead than keep talking on the internet. Dead and raped, preferably.

People get angry. Nobody has to agree with you anymore. Nobody is afraid of you anymore. I know this may come as a massive shock to folks used to a position of power, insulated by groups of people who are happy to stroke their egos and soothe their souls. Truth be told, many of these people don’t even *feel* like they’re in power. I know I never do. But it’s time to face the fact that people disagree with you, and that’s their right.

I have dealt with people actually trying to silence me from the moment I posted my first blog post in 2004. And because of that, I find myself deeply offended to hear you equating some folks saying, “You know, maybe my industry magazine should be a little more respectful of all of its members, not just the dudes,” that you say you’re targeted by some massive witchhunt meant to emasculate a bunch of dudes who are used to everyone agreeing with them in every way imaginable. Your insistence that your’e being bullied by Nazis trivializes the actual bullying, death threats, and sexual threats people get in this industry simply for asking to be treated like human beings.

Here are some tips on how to take criticism, real criticism, on the internet, from somebody who has been dealing with both sides of this for a decade:

Start actually listening. For once in your privileged life, listen. Listen. Because if I punched you, and you said “Gosh, that really hurt” and I said, “YOU ARE FUCKING CENSORING ME YOU FUCKING COMMUNIST” you’d think I was insane.

Listen. Do better. Understand privilege and power. Understand why people didn’t speak up before. Why you didn’t hear it before. If you hit somebody, and you really didn’t mean to would you say, “Well, it’s your fault for having tits?” or would you say “I’m so sorry I hit you. That wasn’t my intention. I will actively work to not hit you in the future.”

I know what somebody who was genuinely interested in open, honest, respectful dialogue with people they considered humans and colleagues would do.