You might think it’s impossible for folks to talk about epic fantasy without talking about Robin Hobb. In fact, I hesitated to put Hobb’s name on the list of writers I showcased for this series. But I’ve noticed a few “fantasy canon” or “hot fantasy that broke all the rules!”-type posts that have overlooked Hobb, which is both shocking and seemingly impossible, as Hobb’s work, I’d argue, had one of the first (and I think most influencial) “heroes don’t win shit” messages. It was proto-grimdark, and shocking for me to read as a teen in a fantasy landscape where heroes always got the girl and other Grand Prizes one gets from Saving the World 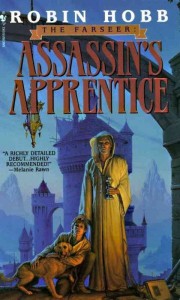 If Jon Snow had been raised in the Starks’s kennels as their personal assassin, well – you’d have something very like Assassin’s Apprentice, Hobb’s first book written under that name. Assassin came out the same year as Game of Thrones, and incited quite a bit more buzz, as I recall, because Hobb was an obvious pseudonym and nobody could figure out what Amazing Established Writer had come out of nowhere to write such a gutwrenching epic.

In fact, Hobb’s name was a carefully calculated pen name, as her work under her real name, Megan Lindholm, hadn’t sold as well as folks liked and was in an entirely other genre (urban fantasy of the old school “creepy shit happening in cities” type, not the werewolves-sexing-up-vampires type). The new name and – most importantly – the dark, gritty, lush and amazing storytelling did the trick, and Hobb’s work has become a large influence in breathing new life into the fantasy genre.

The astonishing thing about the erasure of this particular fantasy great in the narrative is that not only are her books well-selling (and well-paying – after her Assassin books, her next series is reported to have garnered a 7 figure advance) but she has just announced another trilogy set in the same universe, The Fitz and the Fool trilogy, with the next book coming out in 2014.