LeGuin, Boys’ Own Adventure, and the Fine Art of Genderfucking

NOTE: This post was originally published on the Feminist SF blog in 2006 or so. It was pretty popular at the time, but has been difficult to find these days, so I dug up the cache and am re-posting here. Despite being tempted (the “terrorism” bit is… interesting), I have left it unedited.

Almost without fail, Le Guin’s Left Hand of Darkness gets praised (and praised, and praised) as the most groundbreaking book on gender relations ever written in the SF/F field. I’m always hearing about how it changed so-and-so’s whole world, their entire conception of gender. You can’t throw a stone at a Wiscon panel without hitting somebody who gushes about this book.

And nothing else written since has carved such a significant place for itself in both popularity and sheer genderfucking.

And there’s no other book anyone’s ever talked to me about that fucked with their ideas about gender in the same way this one did – at least, not any book that was as wildly popular as LHoD. 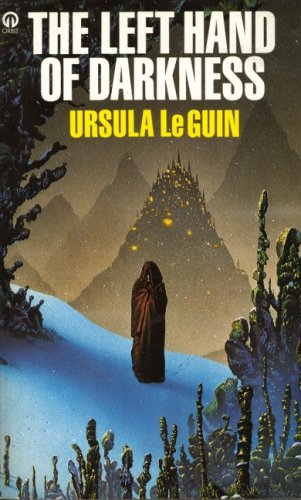 This has been bugging me for a long time. In the last 38 years, no other book has been as widely read and as radical as LHoD?

But where’s the book that’s going to change an entire generation’s conceptions of gender? LHoD is great, but I’d hope that over the next 50 years we’re passing around several books of the same popularity and significance as LHoD. I’d hope we’d be producing stuff that’s just as well thought out, that we can’t help but read, talk about, and watch go mainstream.

Which begs the question, what’s missing from all these other genderfucking books?

Because that’s what Le Guin did – she gave us an apparently “safe” boys’ own adventure story from the POV of a hetero white male. Then she pulled us in and started dropping bombs. It’s the same strategy she used in Wizard of Earthsea: you don’t find out Ged’s skin color until you’re well enough along in the story. If reading about somebody of a different color might have bothered you up front, you’re hopefully too deep into it to care by the time she reveals it.

When asked about whether she would have written LHoD differently – perhaps more radically – if she wrote it today, Le Guin reminded the speaker that the book was already pretty damn radical for 1968.

It was a funny question, because you know what? It’s not up to LeGuin to write the next radical feminist book.

If the most radical and popular feminist fiction came from a white, heterosexual mother of three in 1968, what does that say about the current state of feminist SF? And the current writers? (oh, relax, I include *myself* in this category) Why are we still asking her to write and rewrite it for us? Are we all still wallowing in a post-1980s backlash (oh, fuck, to be stuck in the 80s!), or is Le Guin just so incredibly talented that you only get that mix of great writer/great thinker/great feminist once every fifty years?

Cause if that’s so, that’s really fucking depressing.

On the feminist SF list I belong to, one list member asked if perhaps Le Guin’s book was so popular because it wasn’t actually as radical as we might think. It was very safe. The hetero male protagonist doesn’t have sex with any of the planet’s inhabitants, no matter their current gender. We go off on a boys’ own adventure story, on a planet entirely populated by people referred to as “he,” no matter their gender. Le Guin is a natural storyteller, and she concentrates on the story. It’s not overly didactic. It’s engaging and entertaining.

Stuff like Egalia’s Daughters might have some far more radical ideas, but it’s got shitty characters, inconsistent prose quality (if you could call it “prose”), and bizarre POV shifts. Also: not really an adventure story. Also: silly ending.

Joanna Russ’s The Female Man pretty much consistently Freaks People Out. Especially those uncomfortable with her angry writing (I LOVE the angry writing, but I’d bet that’s a lot of why she’s not as popular as LeGuin, though her body of work is also much, much smaller).

As for more recent stuff: Wen Spencer’s A Brother’s Price was simple romance-role-reversal fluff reading, and ultimately about as filling as cotten candy. Candas Jane Dorsey’s Black Wine is brilliant and haunting and weird, but it’s a weirdness that also makes a more mainstream audience uncomfortable. Nicola Griffith’s Ammonite comes closest to the adventure-feminism-good writing combination, but ultimately, she’s writing about another all-female planet, and it was ground I felt Russ had already covered pretty well in The Female Man and When it Changed. I also love everything Maureen McHugh has written, but her plots aren’t traditional “plots” and her endings tend to taper off instead of tie up. Eleanor Arnason does some very non-traditional things with her story structure as well (another author who seems to be playing with traditional notions of “adventure” plotting), and I think that’s a turnoff for a wider readership (I’d like to add that not having a wider readership does nothing to invalidate the work of these authors or their work. I love their work. I’m simply trying to understand why LHoD and not these others as “book that totally changed the ENTIRE SF/F FIELD AND MY LIFE!”?).

To be honest, LHoD has just never done it for me. Le Guin is one of the most talented writers in and outside the field, but I’ve always found her fiction a little dry (I prefer her nonfiction). She’s never been as radical as Russ, nor as angry (in writing, at least), and it’s the anger I especially identify with in Russ’s work – that anger that so terrifies and puts off so many others.

It’s my own ambivalence toward Le Guin’s fiction that’s made me so curious about why LHoD is still held up as the primary book about speculative genderfucking. Certainly, it should be part of the SF/F feminist fiction canon, the first groundbreaking book.

But where’s that other groundbreaking book? Not just one rich in radical ideas, but so well told and well-respected that it enjoys a wide and fanatic readership?

You could argue that that sort of book builds up a reputation over time, but I can’t help but note that 15 or 20 years should be plenty of time for something written 15 or 20 years ago to come into its own. And I’m not seeing that.

Or, you know, is feminism just so five minutes ago that we’re all content to write about strong female heroines who are just assumed to be “equal” in whatever made-up society we throw together – where men are men and women are men, too?

Cause if that’s radical feminism, I’d love to see what we’d call a body of work today that was written in the same angry, brutal vein as Russ’s fiction.

And that would be really, really cool.