The Revolution of Self-Righteous Dickery will Not Be Moderated

DISCLAIMER: (a la Wendig) THE IS MY PERSONAL FUCKING BLOG

I read once that the real cost of racism was in keeping folks affected by same from doing their work. This works for stuff like feminism and homophobia, too. Instead of doing the work we were meant to do, bigots want to keep people spinning in circles, spending all their time writing endless think pieces that refute their insistence that we can’t and have never done anything. Yes, ::yawn:: we exist, yes we can do these jobs, yes we are human, and yes we matter. It keeps us defending simple bullshit truths that – if some dude said them – would go unchallenged. And those unchallenged dudes get to go off wanking about life, saying whatever fucking thing they want, doing whatever work they want, because they don’t have to sit around defending their right to exist and speak the truth.

But everybody else is constantly challenged and bullied with the threat of erasure, and most of our work is just fucking digging out from under that bullshit.

Speaking of which, I’m hip-deep in writing twelve essays – due July 1! – for my book The Geek Feminist Revolution which will come out in spring next year from Tor Books. My space opera, The Stars are Legion, is due to Saga Press on October 1.

To sum up, haters: I don’t have time for your internet wank.

Then I found out that a Tor Books employee who made an off-hand comment about The Geek Feminist Revolution a month ago and clarified the term “Sad Puppies” in the comments on her personal Facebook page got a public dressing-down from her employer after somebody complained that she’d, you know, said a true thing.

I know what it’s like to be a woman who says True Shit on the internet and has people who want to get her fired for it. When I wrote a post here once related to an old day job and a health insurance benefits debacle, I had a coworker print it out and put it under the HR Director’s door. I hadn’t said anything untrue, but the HR Director asked that I “soften” some language I’d used to anonymously refer to one of the execs, which I did.

I wasn’t fired, but it was a good lesson in how personally a lot of men take being talked about in public by women, even anonymously and truthfully. Yes, as a woman, people say outright crazy fucked up shit about me up to and including death threats, I’m so fucking used to it my eyes just sort of glaze over and I’m like, “Yeah, sure, I’m totally a Nazi cunt. I have a lot of work to do with my Nazi cunt army, here, so laters, haters.”

So here’s the deal: it fucking sucks to be a woman in the workplace, and to have your employer throw you under the bus for saying a true thing. It fucking sucks that guys who have been there longer and have said the same shit for years (and others who actively harassed people and had to be encouraged to quit their jobs because they wouldn’t even fire them for it!) get a private slap at best and the public shit hammer comes down on you because you’re the softer target.

How the fuck did we get here, anyway? How the fuck did anyone think Tor Books or John Scalzi were some kind of militant leftist front for full communism? Scalzi’s a moderate and Tor Books is a fucking publisher  (a business! a corporation!) who publishes everyone because they are here to make money like every other business. When the facts don’t match I guess haters just make up the facts (Tor publishes John C. Wright, for fuck’s sake. And they are publishing my book! Because they think it will make money. Fuck, I think it will fucking make money). But attacking, say, Aqueduct Press and Ursula Le Guin just wouldn’t enable the whining boy-pups and their puppets to do the masculine posturing and chest-beating that they all seem to get off on so much. So it’s the whining boy-pups swinging their dicks at John Scalzi and Tor Books all the way into the sunset, scrabbling over scraps of… what? Money? Prestige? Righteousness?

Here’s what fucking pisses me off: it’s that this fucking pissing contest between a bunch of dudes – none of whom will actually have careers harmed in this fucking circle jerk, let’s be real – is hurting the exact people it’s meant to hurt, because they’re the most vulnerable, the ones most likely to get thrown under the bus, and those guys and their mobs fucking know it.

You can’t even say “the sky is fucking blue” on the internet, as a woman, without public shaming. Where was the public employer outcry during RaceFail, or FrenkelFail?

I’d like to tell you there’s no solution to it, and corporations are corporations, and this is how it is, but one can write a politic letter reminding people that a company’s employees are not speaking for the company on their personal social media pages (which the Neilsen-Haydens have been doing for YEARS without public reproach) without calling out one particular person who simply explained on her personal page in simple terms the politics of a handful of people who hijacked an award ballot, the politics of which have been well documented in pretty much every major news piece (including one I wrote!). Funny, isn’t it, that nobody was publicly castigated by their employer for comments related to RaceFail or FrenkelFail but my god a woman said some dudes are sexist bigots because they have said sexist bigoted things and pushed a slate that resulted in fewer female nominees for the Hugos than in recent years past and OMG:

TRUE THINGS WERE SAID BY A LADY ON THE INTERWEBS AND HERE WE ARE.

If you’re an employer faced with a mob of bigots because a female employee said a true thing in public, maybe take a step back and ask how you’d have responded (if at all) if they came after one of your top dudes for saying the exact same thing. You may not even have to think very long because they probably already have. 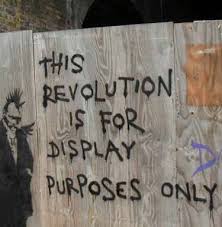 There’s no safe space for women in public. Even doing what they want us to do: shutting the fuck up, just means mobs like the Gamergate/Puppies will swing back around and say we aren’t being vocal enough about our rights, and so deserve to live life as quiet second class citizens. So we should just delete all our accounts, pretend we have no opinions, and let folks on the opposite side of the spectrum get exactly what they want with their angry letters, which is all the space in the world to jack-off over everything without any moderation.

After all, that’s “safer” for us, right?

I was asked on the Blogger Keynote panel at BEA if I had any final thoughts or advice for marginal folks writing online, and I said, “Don’t be quiet. It’s by being loud and angry and passionate that we’ve gotten this far.”

But we are not doing this alone. We are not speaking out alone, though it may feel fucking lonely when you’re up on that goddamn post in the public square.

We are not alone.

You are not alone.

We are not doing this alone.

This shit is going to change, but it’s going to hurt.

If you’re an ally, I’d like to remind you it’s not you it’s going to hurt. You’ll come out of it just fine with your fucking career intact.

It’s us. Every time. Always us. It’s us they will come after. We pay the price.

But we’re sort of used to it now, aren’t we?

So if you think you’re on the side of fair-handed even-mindedness while sending harassing letters to a woman’s employer, or if you’re an employer looking at how you should react to it, take a step back, and take a good hard look at whose cause you’re really serving, and what it is you really stand for.