What I Get Paid For My Novels: Or, Why I’m Not Quitting My Day Job

In the spirit of honesty and transparency that’s often sorely lacking in the literary world, here’s what I’ve been paid for my novels for the last 7 years.

Many of you don’t realize I’ve had writing contracts for 7 years! That’s because the first contract I ever signed was canceled. They paid it out anyway. But it was nearly three more years before those books saw print, so my professional writing career didn’t start until 2011.

Needless to say, I’ve had a day job this entire time because I like money and also paying for health insurance and food and paying off student loans.

This is the first year that book advances, royalties, and my day job salary will all combine to bring me up over the $100,000 a year mark (likely $105,000 or so, depending on outstanding items) – 75% of which still comes from my day job.  I was pretty much destitute in 2007 – laid off, sleeping in a friend’s spare bedroom, living completely on credit cards – so 7 years from penniless to $100k is a big milestone for me, and I intend to celebrate it by paying off a student loan.

The goal is to be debt-free (aside from the mortgage) in two years.

I also worked relentlessly to get here, and I’m aware it could all blow up tomorrow.

As said, about 75% of that money I’ll make this year, still, comes from my day job. The numbers below show why.

15% of all of these amounts went to the agent who negotiated the deal. 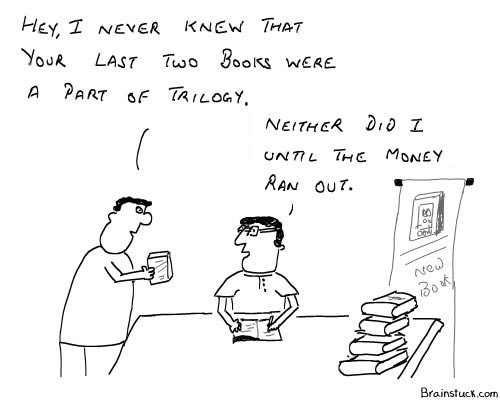 I used all the money from this first deal to bring myself out of the big poverty hole I fell in in 2007. It was pure beast-feeding money. Hard to believe you can feed $30,000 into a medical debt, credit card, getting-actual-own-apartment-with-furniture-hole, but you can. I don’t want to think about where I’d be now without this first deal, which, at the time, I considered a huge tragedy. Free money is not a tragedy, folks.

Earned out: Not quite yet

Royalties paid to date: about $7-8,000, most of it in first two years, most of it for God’s War. Royalties paid last year were about $1,600, after agent took their 15%. Needless to say, books at this publisher were special for a while, so these may not be accurate numbers, but it’s what rolled down to me.

Foreign sales: We sold UK rights, but that deal is a hot mess, so I don’t have cash in hand. Maybe next year. No other foreign rights sold as yet.

You can see the advances there looking pretty grim after the 2008 publishing crash. Prior to the crash, there were a lot more people getting $20k advances and saying, “Hey, yeah, that’s OK,” instead of “Thank GOD.” They became harder to get after 2008.

If you want to know what magical thing happened between MIRROR EMPIRE and THE STARS ARE LEGION to finally get me to what most folks in the industry used to consider a solid mid-lister advance, it’s one word:

That said, MIRROR EMPIRE sales are also bumping up, which is going to improve what I look like on paper as a horse worth betting on. Better sales means better advances in the future. If any of the books out right now tanks, so do advances.

This is a tough business to stay in, especially if you don’t have a solid day job or a partner with same. I hear folks say that the 4-5 book place is where a lot of folks start to make money, and it’s true that this is the first year I could earn what I’d call a living wage if I quit or was laid off. But I know too much about publishing – and the changing tastes of the readership – to go all in making $30-40k a year when I’ve spent this long slogging to get to $100k through a combined workaholic income stream of novels, day job, and freelancing. You don’t give all that up just because you had one positive year.

If I’ve learned anything about publishing it’s that you should always hope that one great year is the start of an upward trend – but you should never count on it.

And that’s why I’m not quitting my day job.