I was listening to the SF Squeecast yesterday when the topic of the “kinder, gentler” days of the internet came up. I’m part of a generation of writers and bloggers who came of age in the early days of blogging, when everything was fresh and new and you clicked the “next” button on Blogger to find new blogs, or accepted LJ invites from friends that pulled you into the rabbit hole of TMI.

These assertions are funny to me because as a feminist blogger, the internet was never a fuzzy happy place for me, from my very first month. It was always full of assholes. I just never let them hijack my blog, my comments section, or any other platform I engaged on. I deleted all the foaming-mouth fuck this, fuck that, fuck you comments and got back on with my writing work. In conversation with my spouse yesterday, he owed up to being part of a group of folks on Prodigy (remember Prodigy? No, probably not) who actually viewed themselves as troll-crushing superheroes. Whenever a well-known troll jumped onto a thread and started derailing, they’d organize themselves, start a new thread, and goad the trolls into hopping over and harassing them to spare whoever had drawn the troll’s ire.

Trolls have always existed. Just like child and domestic abuse in the 1950’s, just because it wasn’t talked about, or wasn’t on TV, doesn’t mean it didn’t exist. It just wasn’t cool to speak about.

And yes, we’re the ones who made it visible, after enduring a lot of bullshit.

After dealing quietly with abuse since the beginning of the internet, many folks, most of them women, decided to air the reality of the abuse they received, and though it took nearly a decade, men and mainstream media outlets finally started believing it was something that existed, and started signal boosting. Suddenly we were seeing posts that compiled all the horrible comments they got, the ones we deleted quietly back in the day. Not a day goes by now, it seems, when someone on Twitter isn’t retweeting some horrible thing some troll said to them.

I understand the importance of doing this, of making abuse visible. I really, really do. Most folks, on seeing the actual abuse spewed at women online on full display, finally, finally, finally believed that it was happening. I actually laughed when I saw a lot of guys realize how bad it was, because it was preposterous to me that men didn’t believe us, that they lived in this safe internet bubble where the worst somebody ever did was say you were a fucking idiot or post long ranty conspiracy theories that glutted up your comments section. Documenting abuse – especially in the case of serial trolls and harassers who go on to delete content and scrub evidence – is certainly important. It tells us who to stay away from. It gives us an idea of the realities women and women of color in particular face on the internet, and how that abuse both bleeds into real life and is, in truth, merely an offshoot of meat space. It’s perpetuating abuse without consequences.

But by documenting the abuse of these trolls, we also seem to have inadvertently ceded the internet to them.

So now, instead of reading the witty, insightful tweets from a journalist or woman activist while I’m browsing online, what I’ll increasingly see all day is them retweeting or responding to snarky comments, outright trolling, assholes, and derailers. They’ve given over their entire megaphone, the blog or the Twitter or the Facebook account they’ve worked so hard to build, to airing the views of terrible people.

By seeking visibility and transparency they’ve given trolls exactly what they wanted – an audience.

And now, more and more, I see people posting about how much that abuse hurts them, about how it makes them want to quit writing, or interacting on the internet all together. Even people not affected by trolling have gotten so exhausted seeing all the constant abuse aired on every single Twitter thread, or let loose in every comment section, that they’re thinking of leaving the internet too.

If all we have to share are the hateful views of others, then who exactly wins the internet, here?

And to be blisteringly honest, standing up and telling a troll how much their behavior destroyed you – when most trolls are actually sadists, people who take joy in the misery and harm of another – is REALLY giving them what they want. “This abuse destroyed me!” is like a rallying cry on some dudebro message boards to redouble their efforts. “Fuck yeah mission accomplished!” I can practically hear them every time I see some online confessional about another pro leaving the internet because of harassment.

You RT their comments. They win. They destroy your faith in the internet, so you leave. They win.

Of course, this is complicated, isn’t it? Because if you suffer in silence, if you don’t get support, they also win. And if you don’t make it clear how bad the abuse is, then people think you’re just overly sensitive, you’re just being a girl, the internet is hard, suck it up. 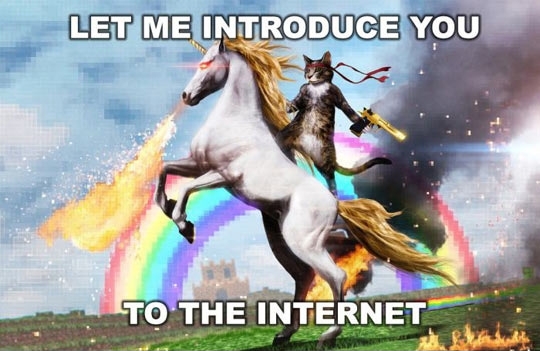 What troubles me most is not that the internet is a horrible place. It’s not. This small group of people with their raging bomb and rape threats have been around since there was an internet. It’s a microcosm of real life. What’s changed is not that they’re here, what’s changed is that we’re giving them access to our platforms in the form of retweets, shares, and blog posts documenting their hate speech, and media outlets have learned that there’s nothing that will get you more page views than someone saying something sexist or racist in some inflammatory post. Why regulate media site comments when the more horrifying the comments, the more people are drawn into signing in and refreshing the page, and visiting, and clicking, and frothing?

As someone who’s been getting hate mail since even before I had a blog (long story), I learned early how to deal with it. I just deleted it. If it seemed like a tangible threat, I’d retain it for authorities. But 99.99% of what I got was just lonely people wanting to be heard on the internet, or outright sadists, hoping to get somebody’s attention so they could feel they were worth something.  I eventually turned off blog comments all together, because that’s where the worst stuff came from. Turning off blog comments was the best thing I ever did. I no longer had to sift through angry vitriol, some of which would go on for pages, or over multiple comments.

The primary place I engage with people now is Twitter, which is a fabulous platform because that troublesome dudebro only gets off one, maybe two tweets – some of them not even terrible, most of them just passive-aggressive, so I know they’re just poking for a response – before I mute or block them outright. That leaves them to scream at me on the internet quietly, safe in their own little bubble of 11 followers, without hijacking my time or my audience.

I also reduced the number of email threats I got really easily, by simply changing my email address to a “publicity@” address instead of a “Kameron@” address. When someone sends you something hateful, they want to KNOW you’re getting it. They don’t want to think it’s being vetted by some publicist. And now, I’ve reached the point where all my email really is vetted, sorted and forwarded by my assistant (no more subterfuge, ha), so I never see anything hateful at all unless I’m inclined –for some wild reason – to visit the “hate mail” folder in that inbox.

I drew very careful lines around my online life. All that time in the trenches in the early days of the internet, arguing feminist theory with trolls, taught me a lot about patterns of trolling, online abuse, derailing, and who I’m actually here to serve.

I’m not here to turn someone hateful into a happy angel. That’s laughable. I’m here to connect with folks looking for experiences like theirs, someone interrogating and exploring the same issues, folks who want to think, to discuss, to learn. I’m not here to turn a misogynist into a feminist. At best, long reading of my blog and my work might teach someone who thinks they’re all about equality that they are actually affected by misogyny, that they think racist and misogynist things, and hopefully work to fix them.

The most persuasive piece I ever wrote was a story about llamas, for goodness’ sake.

So if you’re going to Fight the Man, Fight the Trolls, Upset the Internet, Change Hearts and Minds, go for it. But I suggest that you carefully consider what you’re here to do, and who you’re willing to signal boost on the platforms you’ve spent so long working to build an audience on. Interrogate what it is, exactly, you’re going to accomplish by engaging with some snarky dudebro or well-known genre troll on Twitter who hauls out the same tired arguments day after day, decade after decade. I actually got a tweet from a well-known genre derailer in response to something I posted about racism, and he said something to the effect of, “But you’re forgetting about class!” and I muted him outright, because I knew exactly what his derailing argument would be – I’d read it a thousand times in other venues, seen a million other folks take this one on. The song was not going to change. I knew where it was headed.

I’m not telling folks to pretend abusive comments and campaigns don’t exist. Certainly not. If you find it cathartic to write a post every quarter with a roundup of your best hate mail, that’s fabulous. But if you find it horrifically painful to dredge through, and it continues to upset you every time you see it, maybe this isn’t something you should do. Maybe you should delete all that bullshit and get back to work and save the commiseration for a con or a private email exchange with a friend. Putting up a big post every week saying how much it’s destroyed us… I worry about those posts. I worry that posts like that get trolls very excited, and the excitement and delight that it causes them? I’m not sure there’s public good being done that is enough to offset that. Say your peace. Work it out. But then please, please, please, get back to work. Because what angry, jealous, mean, frightful people want most of all is to derail you from your work. Shut you up. Move you off the internet. And if all you’re doing is talking about them constantly, retweeting them, sharing their mail, you’ve given them a voice, and well – they feel heard, which is exactly what they want. So they double down, and things get worse. They want the time and attention of someone they are jealous of, someone they fear and hate for being everything they wish they could be, because you are loved and admired and talented and awesome, and they know they aren’t. Yes, that’s you: you’re awesome. It’s why they hate you.

So please consider your narrative, and how much of your own space you want to give over to the people who hate you, and how often.

I promise: the best revenge is being awesome.