Why Everyone Should Be Reading Ancillary Justice

If you follow SF/F book blogs or are active in SF/F circles on Twitter, you’ve probably already heard of Ancillary Justice. If you STILL have not read it and bought copies for all your friends – NOW IS THE TIME.

(if you already bought copies, go buy some more)

Ancillary Justice is a colonial-era mystery/revenge saga (which colonial era? Well….) about a person named Breq who’s seeking (you guessed it) justice for a terrible wrong. There are an amazing number of things to love about this novel – the lush, careful, fascinating cultural details of the universe-conquering Radch and the people of Ors and Nilt, two far-flung peoples our protagonist comes into contact with. There are the wonderfully complex and human characters, who have love and faith and hate and ambition and anger and desire. It’s not until you read an SF book that knows how to spin a great character that you realize what a real dearth of them there are in a lot of SF, still. 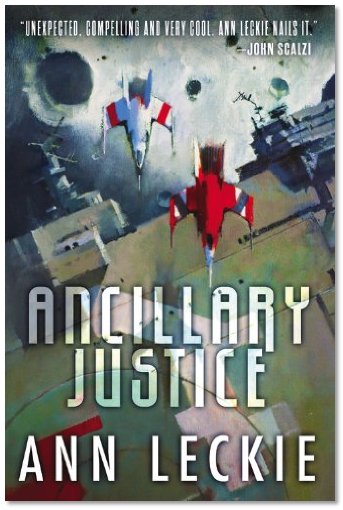 This is character-driven SF at its finest.

Even more interesting, for me, were the politics of slavery and oppression, colonization and hierarchy. It explores the mindbending doublethink of colonialism on a grand scale, and asks deep questions about what we mean when we say “civilization” – without losing a beat in the action.

It’s got all the cool SFnal elements here, too. There are aliens and alien artifacts and super weapons and sentient ships and explorations of self vs. machine vs. collective. There are gun battles and near-death falls and genocide and double crosses and betrayals.

Reading this from the perspective of another writer, I was also impressed by the sheer ambitiousness of this book. There are narrative things Leckie does here that should not work, but which work. Having just written a book I thought was intensely complicated, I found myself shocked and awed at how well Leckie nails this entire concept. We get rapid-fire POV shifts between a sentient ship which inhabits several bodies. We get a whole scene happening concurrently – no scene breaks – to the “same” character in two different places.

The politics are also so intensely complicated that I found myself more relieved than annoyed when one of the characters had to re-explain the situation at the end of the book to another character. I’ve had people say that science fiction makes their head hurt. It so happens I’m one of those people who likes that about science fiction, and realizing that despite its intricacies, I had managed to grasp the political machinations with only mild head-hurty-ness pleased me deeply. Seeing how Leckie communicated these intricacies so well was deeply impressive.

I recommend a lot of books here with caveats. “Watch out for the superfluous rape scene” or “this lazy bit of racial stereotyping,” or “the three or four times it slips into misogyny.” But most astonishing of all, for me, was that Leckie wrote a powerful, arresting, beautiful space opera that didn’t punch me in the face the whole fucking time.

I love space operas to bits, but so many of them are so clunky and lazy they make me want to cry. Ancillary Justice did, in fact, make me tear up. But only because I sympathized so strongly with the characters. Not because I was being insulted. In fact, Leckie’s deft handling of gender here was so skilled that a third of the way through the book, I stopped trying to guess everybody’s gender. Because to our protagonist, gender does not matter. It’s not seen. Sure, you see a lot of writers try to do this – but Leckie actually achieves it.  This book should win a Hugo AND a fucking Tiptree. BECAUSE HOW AWESOME WOULD THAT BE??

Leckie’s book is one of those astonishing finds. She was one of those folks who I had only seen in passing on the TOC at Strange Horizons. And now here is this lovely book, this perfect book, the book I’d been wishing somebody would write for so very long – a space opera that was so lovely and thoughtful and bad ass and brilliant and that didn’t punch me in the face. And here it is. And best of all, Leckie makes it look so fucking easy that all I could think after finishing was, “Why aren’t we all writing books this fucking good?”