Good morning, America. Are you hungover? Honestly, I think I’ve been hungover since the 2000 election, which was a whopping 16 years ago. Two timelines diverged in a wood, and lo, we took the darker one, and here we are, America, perpetually drunk or hungover.

Looking back, it’s easy to see why nobody cared to show up to that election. We’d come off the prosperity of  Bill Clinton’s 90’s, artificially created by the deregulation of the banks that would eventually undo us all. While the Silicon Valley bubble had already burst, credit was still cheap and easy to come by (and would be until the great crash of 2008).  I know someone who was able to consolidate their student loans during this period at a 1% interest rate. I didn’t have a credit card with more than an 8% interest rate, with most of them coming in at 3-6%. It was a freewheeling time to be alive in America if you could get access to credit. But that bubble was set to burst. And when it did burst, we’d be at war, a war that still wages today.

When everything fell apart we didn’t have somebody at the helm smart enough to figure out what to do. War, instead, would have to solve everything for eight long years. No president is perfect, but Obama helped many of us dig out of that hole. Are things better for everyone? Well. They are better than they were in 2009, say, and they are better for pretty much everyone, though they may not remember it. At the very least, every American now has access to health insurance, whether they have pursued it or not. We are no longer barred from it for financial or medical reasons. But the war continues under Obama, as well as the nefarious spying on Americans, the dubious “war on terror” fought at home at abroad, blowing up kids in foreign countries and inciting anti-Muslim sentiment from coast to coast.

There continue to be “no more manufacturing jobs” which really, we haven’t had since the early 80’s, but my god, so many people continue to mourn them. There are far too many cities trying to woo them back instead of investing in something else. Invest in cell phone towers, IT startups, solar plants, fucking anything but fucking dead manufacturing jobs. We want an America that our grandparents had without the 90% tax rate on the rich that made that America possible. How do you think they paid for World War II? Taxes. It was still patriotic to pay taxes, then. We want that idea of America without making anyone pay for it.

Many elections are characterized, in truth, by a lackluster amount of emotion. Nobody got excited about Bush or Kerry, or Bush or Gore (in part because Gore never talked about things he was passionate about but also see: false sense of prosperity. When you are mostly comfortable, what’s there to get excited about?). The second round Bush made, he was able to drum up the “war on terror” fear-mongering, and hey, that works. But so does Obama’s tact of going with hope. He ran on hope, and he won twice (legitimately, without having to call his brother in Florida to ask him to call the race for him). Hope can win, too. It’s why it’s so aggravating to watch an incompetent bankrupt narcissist run on fear, the oldest playbook, and use that emotion to pull so many people into his orbit. Worse is to watch him go up against the most qualified presidential candidate – maybe ever – who has been knocked down so many times she should not have kept going, but who is going anyway, and fuck you for getting in the way.

We forget that it was Hillary Clinton who was heading that first tentative effort at universal healthcare in the 90’s. And the GOP destroyed her for it. After that failed bid, she went back to safer “first lady” type things, like doing stuff for kids. Even though the very best thing anyone could have done for children and families in America was create universal healthcare (they did manage to expand coverage to cover a lot of kids). So she backed off, but she was not out. She was never out.

Hillary Clinton’s dogged perseverance is a thing to behold. Whenever I’m feeling shit about my own life, and my own challenges, I remember that she’s fucking 68 years old, and has weathered the very worst that an entire political party can throw at her, and here she is, still going. The fact that she had to share a stage with some mediocre white man after literally dedicating her life to political service and the political game to prepare her for this moment is fucking insulting to women everywhere. Like, everywhere. Everywhere. Because we have all been in that place, where we’re more qualified than the dude talking over us, where we have better ideas, better work ethic, where we are simply better in every way, and we keep waiting for folks to see it while he froths and gesticulates and jacks off at a meeting, and you can’t lose your shit, even though he is, because while he will be called “passionate” for spitting angry shit at everyone, you’ll be called “emotional.” So you sit on your hands, and you wait for him to wear himself out, and you start again with reason and logic, even knowing that it’s emotion that wins arguments, not logic. And you do all this knowing that no matter how smart and logical you are, it’s very possible he could still win out, because people are fucking stupid. People are emotional. And yes, “People” includes men, there (a VP at a company I worked for threw a cup at a woman once. He was not fired, suspended, anything. Zilch).

That’s America, too, and that’s my own long hangover. Trying not to yell in meetings. Performance reviews where I’m told I’m, “too smart” and come across as “arrogant,” and all I could think was, “Shit, if I was a dude I’d be getting a huge raise right now.” Oh, certainly, things have worked out for me, too, as they have for Clinton. She’s a fucking major presidential nominee, after all. You don’t get there without moving some large mountains. But you remember the bullshit that wouldn’t be in your way if you were a dude. And she and I would have had a greater mountain of bullshit if we weren’t white, or cis.

Yet there is hope, here, for me and for her and for many of us, because even if this turns into some squalling nightmare, the dark-er, darkest-er, timeline… no, stop. Let’s not even go there. 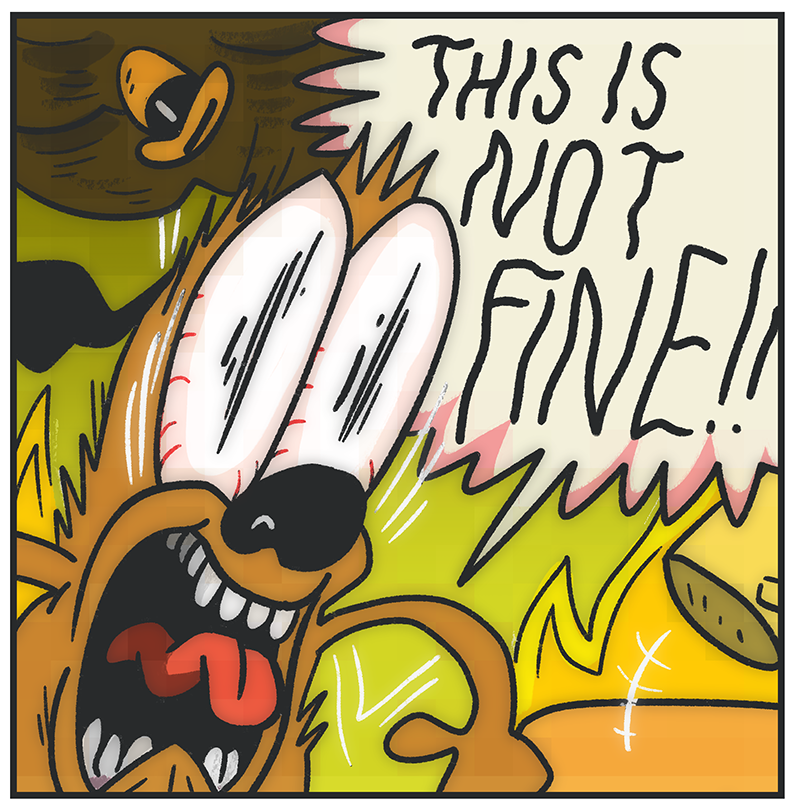 This is not fucking fine. Not one bit of this. Our perpetual drunken hangover is not fine. It’s no way to live. Being angry and scared all the time when we live in an era of unprecedented technological and social change, with a lower crime and murder rate than pretty much ever, is not fine. Falling for the same old fear-mongering bullshit, in every era, is not fine. Repeating the same old far-right hatemongering decade after decade, even and especially when people are still ALIVE who remember fighting against a people whose far-right xenophobia made it possible for them to systematically murder over 6 million people is not fine (and people are still ALIVE who were PART of this murdering).

As a student of history, I find that watching the same historical wheel turn again and again, watching humanity make the same mistakes again and again, really tiring. I get that Hillary Clinton does not represent a passionate positive emotion for people. She is not hopey-changey stuff. She is a tough politician. She will give us a continuation of Obama’s policies. We are voting in the current status quo. Which is SUPER better than the status quo of 2008, yeah. But the status quo is not super exciting. Sure, the path we’re on now is messy and taking forever and change is hard and mean and exhausting, but it’s happening. Because I’ll tell you what’s WORSE than the road we’re on, and that’s the road that leads to murderball, The Handmaid’s Tale, nuclear war with Russia, and internment camps.

Are we living in a dystopia? Sure. We are living in the 80’s Robocop future where corporations control everything because the government is too afraid to tax them and use the money on infrastructure, which would in turn create tons of jobs and improve not only the economy, but working class morale, too. Regan put us on this road in the 80’s, and we’ve never truly jumped back and realized the error of our ways. Deregulation, busting up unions, closing mental health facilities… none of those things was great for the middle class. They were great for rich people.

Yet strangest of all (or not, if you know history) we are living in a Robocop future where dissatisfied white people, in particular, put the blame for this future on immigrants, welfare fraud, and uppity non-white people instead of people like the millionaire running against Clinton who hasn’t paid his taxes in 14 years. I know how we got here, because it’s how we’ve always gotten here. What I want to understand is how we fix it, and how we fix it is the same way we did before:

Sure, the world is a big, scary place. Shit is moving incredibly fast. Snapchat has sunglasses that you can use to record things now, and it will succeed where Google Glass failed because the glasses actually look cool (also you can call them “specs” or “snap specs” and how cool is that). Also there are no more jobs with pensions and no job security but you can freelance any old fucking thing and telecommute from almost anywhere. Healthcare is expensive and can still put you into debt, but everyone can be insured now, which means you won’t get turned away. Also, we don’t have hookworms or other parasites anymore, most of us, and that’s pretty cool.

I mean, take what you can get.

But I’m not going to pitch more fear of the DARKER-EST timeline here, America. Instead, I’m going to tell you to stop drinking and wake the fuck back up (especially you, fellow white people). Wake the fuck up and start doing shit,and be brave, like these folks and these folks and her and fucking her, for God’s sake. And if you can’t fucking DO shit, then at least vote for an actual future. Show up and do the bare minimum and cancel the apocalypse.

There is a better world out there, but achieving it requires good people to actually do something. All it takes for the worst to come out in all of us is for good people to do nothing, and just keep drinking.

So which will you do?