Surfacing from the ragged bowels of the EMPIRE ASCENDANT manuscript to note that two weeks from today, I’ll be in Bloomington, MN for CONvergence. I’ll be rolling in midday or so on Thursday, and out of there Sunday morning. Do catch me at a signing or after a panel.

I’ll also be bringing a few copies of God’s War,Infidel, and Rapture – but alas, no MIRROR EMPIRE until GenCon in August!

Hoping to see some of you there!

When does it make sense to work for exposure and when does that become exploitative? At what point do you need to insist on charging? What are the trade-offs when choosing between free and paid art? Panelists: Elizabeth Bear, Sharon Stiteler, Kameron Hurley, Michael Damian Thomas

Not Men or Women: Everyone Else in Fiction

Not all characters need to be male or female! Explore the gender binary and how it can be, and has been, subverted in fictional universes and in reality. We will discuss common tropes and ways gender could be explored better in all fictional media. Panelists: Elizabeth Bear, Haddayr Copley-Woods, Kimberley Long-Ewing, Benny S, Kameron Hurley

Increasingly, writers feel the need to include a scientific (or pseudoscientific) explanation for strange events and objects, rather than simply having a fantastical or magical explanation. Why is this the case? Does it work? Panelists: Kameron Hurley, Kelly McCullough, Sean M. Murphy, Doug Hulick, Martha Wells

When people abuse anonymity to give hurtful, damaging criticism, is this merely a failure of empathy, or is there something more there? How do you criticize people without triggering a flame war? Should you even TRY to avoid flame wars? Panelists: Miri Mogilevsky, Jason Thibeault, Wesley Chu, Kameron Hurley, Ted Meissner 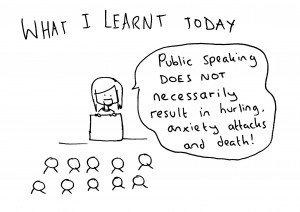