Cowboys and aliens… about what you would expect (with spoilers) 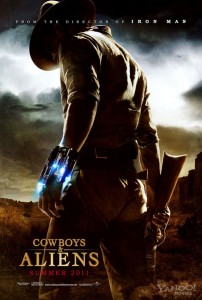 With a name like “Cowboys and Aliens” I should have expected that, yes, really, it would only feature cowboys and aliens, and the appearance of a female character with a gun did not make her a cowgirl, of course, but an alien (obviously. If you aren’t a cowboy you must be an alien).

This movie was indeed exactly as it was advertised, which wouldn’t have been a bad thing. I mean, hey, cowboys and aliens! But… but… I don’t know what it is about Spielberg and trite storytelling (yes, I directly blame Spielberg for any  movie he executive produces, even if he didn’t write or direct it. I have a gooood feeling that it’s his preferences that often burble to the surface), but at some point he seems to have found The Formula, and now he is proceeding to beat us to death with it. This does not, luckily, detract from the visual/emotional experience of the story as your in it (I was engaged throughout the film), but it does start to bug you as you begin to notice and count the beats, and it’s especially aggrevating when you go to to postmortem posts like this and realize it didn’t all sit as well with you as you thought.

You figure out all the beats early on – all the characters who have spouses/loved ones taken by the aliens will, of course, join Our Hero in getting their loved ones back. The hero is haunted, of course, by the death of his wife, who was killed by aliens (before this, she is referred to as having been a whore – very explicit whore/martyr thing going on there, which annoyed me. Why did he like her to begin with? We never know). For a minute, I actually thought she’d been raped, to boot (which would have fit neatly with this lazy storytelling).

Yet for all that, Spielberg does this other thing that is mooshy-wooshy sentimental and yet, works. He makes you really care for the characters, despite  or because of the pat little plot and easy beats,  because that’s the other bit of the storytelling formula that works.

You wake up in a white room, or a desert, not knowing what’s happened to you, and slowly piecing together the narrative along with your protagonist. Classic and slightly tired SF trope, but it works. Your characters are achetypes, basically, from our Lone Wolf hero to the arrogant rich teen, the plucky young boy, the possible love interest/guide, a grizzled war vet with a heart of gold, and etc. etc. The acting here of Ford and Craig is terribly lovely, and Ford’s character in particular is given that perfect blend of character traits that makes you both hate him and sympathize with him (as with any good villain). Sadly, this often meant skimping on characterization of the supporting cast, which is why everybody else seems to have gotten only the vaguest handwave. The acting and cinematography and effects were so good, in fact, that it was often difficult for me to jive these sophisticated trappings with the rather unsophisticated story. They just did not go together. When are we going to allow our storytelling chops to match our mastery of the visual medium?

Yes, the movie gets points for the “we should all work together instead of fighting” angle, but even that felt terribly contrived. It’s like… it’s like watching a film made for 12 year old. Again. And again. And again. Which is fine. If you’re 12.

For my money, I did actually enjoy the alien tech, though the fact that they wanted gold was… weird. Another heavy-handed clunker of lazy writing, if you ask me. I wanted a whole lot more… non-laziness, I guess. We also get this avenging angel in the form of our only real female character, but  – even though she potentially has the most interesting story – she, too, is given short shrift so we can spend more time sympathizing with Harrison Ford.

Sometimes, I think, a movie is only big enough for so many big egos. Everybody wants their character to be the “star,” and what you often end up with is too much emphasis on the wrong people. I felt like that happened a lot here. I was learning a lot about the people who had the least invested in the story. Which was… weird. Or, would have been weird if one of them wasn’t Harrison Ford.

This isn’t to say I didn’t enjoy this movie. There were plenty of clichéd things it avoided – the crazy “bad guy” Indians being a big one – but the story was stuffed with too many people painted with far too broad of strokes. They weren’t people in the end, just archetypes (Ford got the closest to being somewhat rounded). Which is fine, I guess, but not what I was looking for.

The trouble is, I suppose, that now when anybody says, “Cowboys in space,” I think of Firefly.

And this was most certainly not that.