Do Pro Writers Really Not Know if their Work is any Good?

So I wanted to talk about this phenomenon that I and many other writers experience right before a book drops. I felt this most when I wrote RAPTURE, and I’m here again with EMPIRE ASCENDANT, because these were books I wrote and rewrote massively right before deadline. It meant I didn’t have time to sit back and look at them from a great distance and get an objective look at them. With GOD’S WAR I literally had years of waiting between draft revisions as the book was shopped, picked up, dropped, and shopped again. With MIRROR EMPIRE I’d written so many versions of the story over so many years I honestly wasn’t sure what had gone in and what had been taken out.

Funny enough, it’s the books I worked on longest that I was over-confident about, and the books I worked on for the shortest amount of time that I sweated over more. I suspect some of this has to do with the compression of the process of I’m a genius!/I suck! that one goes through with every draft. You never have time to come back round to “I’m a genius!” on a short timeline because you’re scrambling furiously in the last six or eight weeks before the draft goes out to address all the things that need fixing. You spend this compressed amount of time, right there at the end, only looking at the bad parts of the book.

This is literally all you see of it. You skim right over the parts that are working and get right to the places where your editor or agent has notes, or that you had noted down earlier as something you wanted to come back to. As far as you’re concerned, there are no redeeming qualities to your draft, and I, for one, start to question why it was anyone bought this pile of words in the first place.

When a book goes out, all I remember is everything that’s wrong with it. Maybe this is why so many negative reviews don’t get to me the way they do a lot of writers. Either a negative review is from someone who the book just really isn’t suited for (this is too dark! It has too many women!) or they mention things I already know are challenges that I just couldn’t or didn’t want to fix (it’s confusing! These characters aren’t nice!). Genuinely critical reviews that unpack problematic stuff can be very valuable, but as a general rule, I know a lot of what’s wrong with my book it book drops: I just can’t figure out how to fix it. I write books to the best of my ability, but the reality is that what goes out the door is literally the very best book I am capable of writing at that time in my career, for better or worse.

Sometimes that book is OK. Sometimes it is not. Ultimately, once you kick it out the door, it’s not up to you to decide that. But as a writer I want to get better at being objective about my books and their technical skill. The trouble is, the more writers I talk to, the more I realize that this objectivity about the “goodness” of one’s books actually gets worse as you level up, not better. That’s because as you become a technically more skilled writer, you’re able to see more of the things that aren’t working. 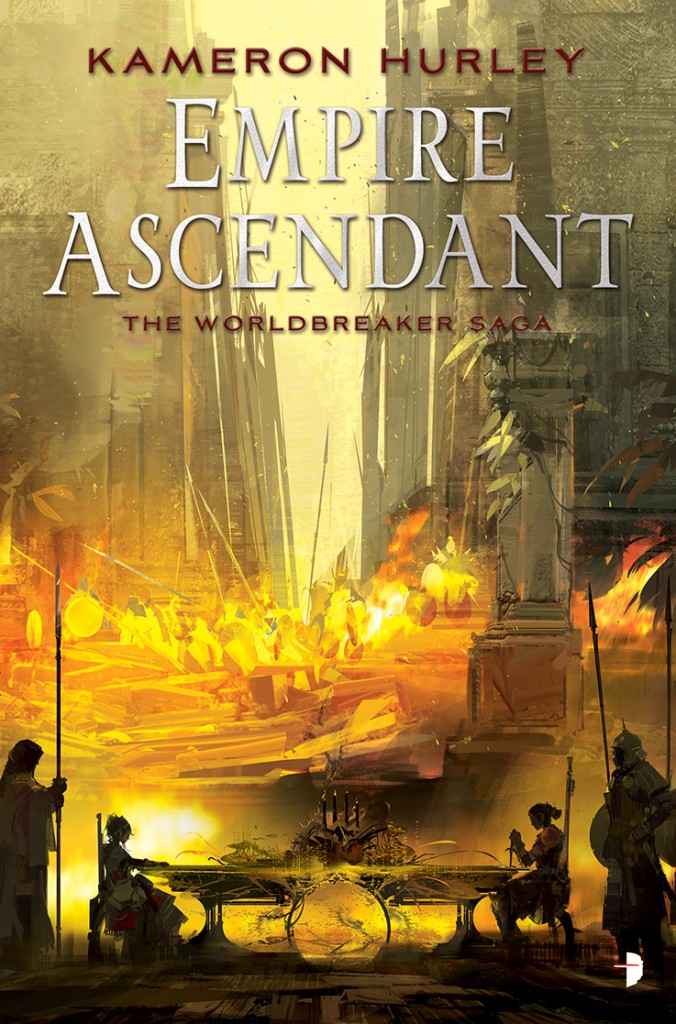 For example: when I first started writing fiction in my late teens it didn’t occur to me that there was no plot in them and people just wandered around. I literally had these little “plot” cards for when I got tired of the people just sitting around and talking, and they were stuff like, “The cart falls off a cliff,” and “someone dies.” Sure, those are things that happen, but they are not character-driven plot. Now that I can see when things are wrong, it doesn’t always mean I can fix them, though.

EMPIRE ASCENDANT had some incredibly tricky narrative/timeline shenanigans that I did my best with, but it was super challenging, and I won’t know if I pulled it off until the reviews come in from folks who are more objective than me.

So though from the outside it may seem bizarre to see an award-winning author crying into their cornflakes about how they’re not sure their book is any good, this isn’t always pretentiousness – it’s the reality of being a writer, no matter what stage you’re at.

Now that I have some distance from my prior books, I can look back at INFIDEL and RAPTURE and say, “Hey, yeah, those were pretty good books.” (GOD’S WAR is still, objectively, a narratively hot mess). But I’m always going to have trouble with whatever it was I finished last. I’m too close to it, and I’ve spent too long tearing apart and rebuilding the worst parts of it to know if the good parts are any good, or even if there are any good parts.

Newer writers who are, perhaps, expecting to gain some objective wisdom as time goes on, well, I’m sorry to burst that bubble. Yes, you will (probably!) learn to write better books, but it’s becoming a better writer that will make you more critical of them, and less able to be objective.

This is one of the reasons it’s so important to surround yourself with people who will tell you the honest truth about your work. What’s good, what’s bad, what still needs work (my agent’s telling comment on an early draft of EMPIRE ASCENDANT was: “Make every chapter like chapter 42.” [for those following along, in the final version, it’s chapter 33 now, a Zezili chapter, which I wrote once through with no changes]). Knowing when to take criticism, and when to ignore it, is an incredible skill to learn, and takes a lot of vision and confidence. I was able to go back and read that chapter, note the conflict and urgency, and then go back through the rest of the draft and look for ways to beef those things up in the other chapters.

But I had to trust that my agent was right, and that I was right to agree with her (it was also one of my favorite chapters). Getting any kind of critical feedback is like that: you have to take what helps make your vision clearer and toss what doesn’t. If I were to get feedback that was like, “Kameron, I really think this should be a book about goats and happy people,” I’d ignore it, because that has no bearing on what the hell I’m doing. There’s nothing objectively useful to be found in, “This should be a happier book” when you’re writing a book about genocide.

And maybe that’s the real crux of how to survive writing books, and editing books, and wading through criticism: you have to know, deep down, what the fuck it is you’re trying to say, and disregard anything that doesn’t help you say that thing more clearly, more concisely, more entertainingly.

That involves a lot of confidence in and of itself, and a lot of introspection. Because though I may not know, when it goes out, if I wrote an objectively good book, what I do know is that I wrote the book I wanted to write, to the best of my current ability, and at the end of the day, when the book’s due to the printer, that’s all you can do.