Gods and Monsters and Valkyries Oh My! 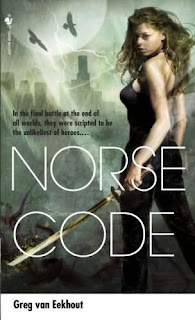 I picked up NorseCode based primarily on the strength of the back cover copy and first chapter, which is usually a good sign (Not always. See The Electric Church for first chapter readings that went wrong). Turns out this is the sort of book that makes me second guess my aversion for books clothed in urban fantasy covers (cause c’mon, you know this is how God’s War is going to look).

So anyways, this is an end-of-the-world-comes-to-California novel, made better by flawed gods and rogue Valkyries with swords. Overall, it’s good eats: totally epic battles and a whirlwind tour of Hel. There are just enough POV shifts, interesting characters, and great settings. It’s a good beach book.

And, of course, it helps that the female characters don’t suck. Who doesn’t want to read about a Valkyrie who’s good with a sword, really?

A couple of personal annoyances: our heroine and her sister had very similar voices. Totally different characters with very different views on life, but when I was in one head as opposed to the other, I couldn’t really tell much difference. They acted/reacted in very similar ways, and had similar thought processes. I actually wondered, for awhile, if they were twins and this was supposed to show how alike they were. In fact, they’re at least a couple of years apart, which is hard to tell based on voice and their interactions.

And, you know, the pan-to-the-lamp “romance” between the Valkyrie and one of the gods was, eh, so-so, and I was reeeeeally glad it was just a “pan to the lamp” romance. I liked that she was the active initiator of the relationship (gods rape human women so much in myth that seeing a human woman initiate was a nice change), but it felt a little strained. I had no idea what they saw in each other, except that they were a man and a woman at the end of the world. Maybe that’s enough.

In any case, this was a fun read. I was pleased to see eight copies on the shelf at the big bookstore in Newport, KY that J. and I visited on our way to see a far less entertaining bit of media…