Hanna: Or, I Don’t Hate Everything, You Know 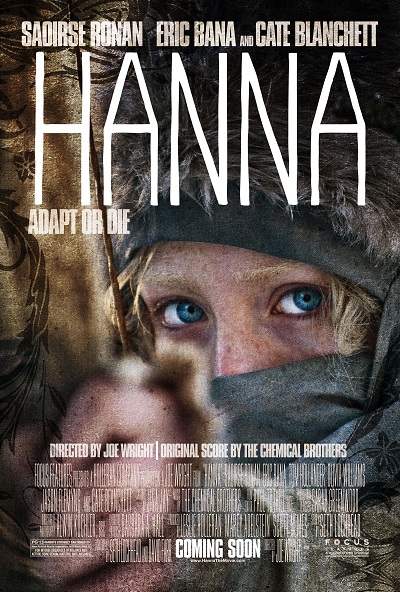 Every once in a great while, somebody makes a movie just for me.

I’d grown so accustomed to seeing bad movies that I forgot they actually made good ones. That’s why Hanna came as such a surprise. Hanna is the story of a girl who’s grown up in the woods in the far north, raised only by her hermit of a father who’s both more and less than he appears.

She has been trained the entirety of her 15 or 16 years of life in how to be an assassin.

Why? Well, she’s being trained to kill the woman who killed her mother.

Her father has his own secrets, of course, and has been planning this particular coup for some time. Hanna is sheltered from the world but not from the realities of life and death. She hunts. She fights. She survives. Early on, we learn that she’s just hauled a 120 lb reindeer in from the field, over who knows how many miles. She is tough and wiry and a survivor.

The film is also beautifully shot, with more attention paid to composition than dialogue. It’s nice to watch a filmmaker who actually knows their medium.

There are some fun reveals in this one, so if you want to be surprised, don’t read on any further, as we get into spoiler territory.

When Hanna decides she’s ready to go off and kill the woman who assassinated her mother, she turns on a locator beacon, and her father cleans up and walks away out into the cold Arctic wasteland. They agree to meet up in Berlin at a pre-determined address. He has her memorize a story about who she is and where she’s come from.

Then the swat team comes in.

You see, Hanna’s father is a former U.S. agent, of course, and one of the best. And he has been actively pursued for some time by his handler, a woman named Marissa (the one who he’s trained Hanna to assassinate).

Now, with all this Hanna-trained-to-be-assassin thing, you’d think this would get into weird woman-being-used territory. But in fact, Hanna is far too cool a character for that, and at the end of the day, the film is far less about killing the wicked witch and more about Hanna’s coming of age.

You see, the swat team arrives and spirits Hanna away. She’s then interrogated. She asks to see Marissa. Marissa, not being a stupid person, puts in a double of herself to meet the girl. Hanna kills the double and escapes pretty early on in the movie.

Her mission done, Hanna’s actual story, the story of Hanna the girl, begins.

Hanna walks across a desert and steps into a wholly foreign place for her and for most of the viewers. She stumbles onto a dirt road, and camels, and mud brick fortresses, and we learn we’re in Morocco. Hanna, of course, speaks Arabic, and likely a dozen other languages. She begins to navigate her way in a world she is wholly unprepared for. Electricity. Running water. People in general, who completely confound her.

She meets up with an absolutely lovely and hilarious British family who are just quirky enough to accept her odd ways, and hitches a ride/stows away, and so begins Hanna’s journey from child to woman.

And maybe that’s what I really loved about this movie. It was so very much a woman’s Hero’s journey for about 2/3rds of the film. It’s like the filmmaker realized what the movie was really about at its core, and lovingly spent plenty of time there.

Hanna’s idyllic coming-of-age trek across North Africa and Europe is not all kissing girls and going swimming and stowing away, though. She’s being actively pursued by Marissa’s agents, as are her new fast friends, the quirky British family whom you grow to love absurdly quickly.

Eventually, Hanna learns her true identity and why it is Marissa is pursuing her unto death. She even gets to fight her super assassin father at one point. I was a little sad when they pulled the “You’re a genetically engineered super-assassin” thing (cause she couldn’t just be that cool on her own, the way her “dad” was?), but I got to pretend for the vast majority of the movie that yes, she was just that cool, so hey.

The ending is mired with too much Wicked Witch imagery, and though Marissa is a cold and steely opponent, she seems to be a bit useless without a gun. Bonus? She never gets her Bad Guy Monologue explaining why it was she shut down the super assassin program and killed all of Hanna’s cohorts. We never learn why. It’s not what the story’s about.

This is not a movie without flaws, of course. As noted, the Wicked Witch kill-your-mother thing was overplayed, and I don’t know that a Hero’s journey necessitates the killing of one’s parents. But it was a beautifully thought out, beautifully shot little movie with strong secondary characters. When her quirky British friends are interrogated, I was deeply invested in what would happen to them (in fact, I think the filmmakers pulled their punches a bit with this part of the movie – I think they’d grown a little attached to them, too).

I would recommend this one all over the place.