I Never Saved Anything for the Swim Back

In the film Gattaca, a young man born with what its dystopian society considered “undesirable” genetic disadvantages manages to fleece the system and rise up through the ranks of its elite astronaut corps. When confronted by his brother about how he’d done it, the young man likens it to the swimming races they had as kids. The young man always won, though his brother was fitter, and stronger. How did he do it? How did he make his way through the ranks of the astronaut corps? The same way he won the races: “I never saved anything for the swim back.”

I have been sitting here with this novel draft for some time now, banging my head against it until the clock for turning it in to get it out before the end of the year basically runs out. After an epic struggle with book promotion exhaustion, day job stress, and seasonal depression last year, I finally just dug in my heels and started getting up at 5 a.m. and just banging it out, because it needs to get done.

It’s a difficult fucking book. There are 12 POV characters and two (now three!) entire worlds at play here. Epic fantasy writers with simpler stories have written them in far longer stretches of time. But it’s important to me to keep this book coming out in 2015, as I have other contracted work immediately after it, and if I want that, I have to make this happen.

To make this happen, I can’t save anything for the way back.

People ask me all the time how to make time for writing, how to overcome setbacks and horrifying publishing disasters and poor sales and bad reviews and hate mail, because those are things I deal with every day, all the time. A bad publishing deal, even just one, haunts you forever, endlessly trying to pull you back down into the deep. And I just blink at a lot of those questions, at a total loss for words, because there has never been an option for me to quit. Oh, sure, maybe a big setback would result in me not writing anything substantial for six or eight months (which has happened before), or inspire me to sit back and rethink my publication strategy or something, but actually quitting, giving up on the one thing I’ve been working toward excelling at my whole life… no. There would be no actual quitting.

Because there is nothing else. 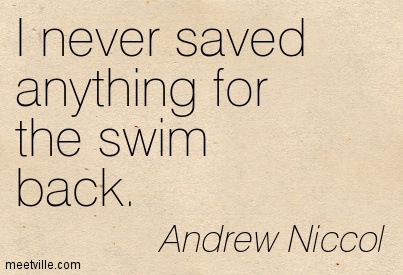 I have given up a lot of things to make it this far in my level of skill, in the success (or not!) of my work. There are people who started out far better at the writing, the promotion, the social stuff, the connections. I’ve seen people who are far better writers than me throw in the towel and tell the profession to fuck itself.

I’m not here because I was naturally a great writer. I work endlessly to level up every day. I’m not fitter. I’m not stronger. But I am relentless.

We call this “escalation of commitment,” when you have given so much to a task, invested and sacrificed so much, that even if it’s clearly a losing prospect, you’re not going to stop doing it. I have gone so far over the cliff of escalation of commitment – 23 years of my life invested in it – that failure is simply something I don’t believe in anymore. Temporary failures, sure: the book that tanks, the publisher that implodes, the year of depression or angst, yeah, those failures will happen. I have no control over them. But what I do have control over is how I react to these failures. I can choose to get hit and stay down. Or I can choose to get up.