In the spirit of more roller derby, less interpersonal squishiness, Travis and I went out shooting at his place yesterday. He lives out in the Ohio sticks, so when we got bored we holstered the glocks at our hips and went traipsing around the underbrush pulling useful things out of the creek and collecting interesting-looking rocks.

I’ve never walked around with a gun at my hip before, and I didn’t like the idea of having it loaded, even if we were just wandering around some abandoned woods like a couple of Alaskan kids. So the magazine was half empty, and nothing was in the chamber.

Travis has a CCW license, and usually carries when it’s legal (most public buildings, it isn’t), but I’ve only been shooting a few times, and have no interest in carrying all the time (Ohio gun laws being what they are, you can carry a gun in full view without a permit. You need the permit for carrying it “concealed.” They’re weird laws).

See, if I’m going to get into a fight with somebody, I’m going to hit them in the face. Not enough people carry guns for me to feel in fear of my life when going around without one. I’m much more of an in-your-face type of fighter.

Still, shooting is a useful skill, and it does get me out into the woods, which, frankly, I really missed during my four years in Chicago. There’s a lot I miss about Chicago, but I’m a country girl at heart. So it’s been fun to hang out with a country boy.

When Travis clipped the holster into my pocket, it was an interesting experience, walking around with a gun at my hip. There is a certain rush of power, and I couldn’t help but being reminded of the women in Bear’s book, Carnival, all of them going around with their “honor” or their hip. It’s a heady, powerful sort of feeling, one that comes with that cliched “great responsibility” thing. It got me to thinking about what it would be like to live in a world where everyone – men and women – was armed.

One of the things I’ve wanted to get used to and learn more about for the purposes of the GW books are guns and explosives. If you’re going to write about a world that’s been at war for three hundred years and has armed most of its population, it sure wouldn’t hurt to get a taste of what it would feel like to go around armed.

When it got dark, Travis and I headed inside and I watched him go through the process of hooking up a new motherboard into a PC. After that he taught me how to take apart and clean a glock, which took a lot more time than you might think. Mainly because he’s finicky about his hardware, and I was a noob who isn’t so detailed with solvent and a toothbrush: 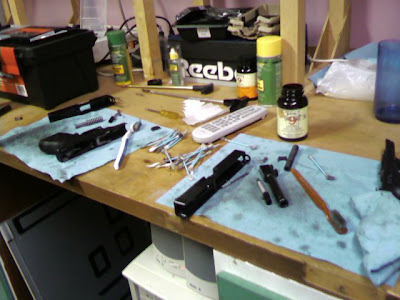 All this while we watched Black Hawk Down (which, as everyone’s said, is indeed a fucking awesome movie) and talked about the evolution of PC processors.

It occurred to me then that it’s not always a matter of spending lots of money to travel to far away places or take lots of equally expensive classes to learn stuff I don’t know, it’s a matter of surrounding myself with cool people who can teach me cool stuff. And being open and willing to learn.

It keeps my brain busy. And that keeps me happy.

We had a really good time.