Maine, Or, the Legacy of Why We Don’t Vote on Human Rights Issues

“Someone in power is finally going to state the obvious truth that gay marriage is absolutely necessary, and they’re not going to put it up for a vote, because that’s not what you do with basic human rights. You don’t let six wolves and four sheep vote on what to have for dinner (or in this case, what, fifty-two wolves and forty-eight sheep?).

The National Guard will stand outside the courthouses and force you to grow the hell up, and you will be remembered in history like those sad ugly white people yelling at the black kids coming to class.

And this isn’t the fifties. This is the twenty-first century. Your bisexual grandkids will still be able to Google your sorry ass and see that you were a spiteful hateful closeminded bigot. They’ll have your lying ads, annotated with footnotes showing how you knew you were lying at the time. They’ll have your ugly homophobic comments and your hate-filled fake news reports captured in crystal clarity on whatever magical Internet++ they’re using decades from now. And they’re going to be ashamed of you. 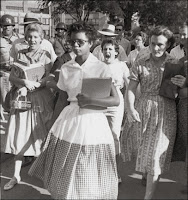 All you’ve done — all you’ve accomplished with your lies and hate and fearmongering — is to delay the inevitable. In the next few years, every widow who loses her home because she “wasn’t really married” to her life partner, and the life partner’s kids have a good lawyer? Every man who dies scared and alone because the man who should have been his husband wasn’t allowed to be at his bedside? Every not-spouse who dies because of not-health-coverage, coverage they would have gotten were they married? Every one of those things that happens between now and whenever the National Guard puts a little learnin’ on you? That’s on you.