Mechanique: The Fighting Circus is In Town 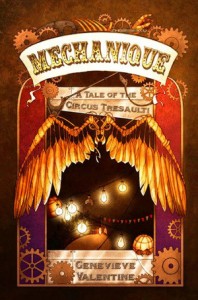 I had heard Genevieve Valentine’s name around a bit (it’s such a marketable name!), but, not being much of a short story reader, had never read anything from her. Folks who knew my reading tastes recommended this one to me… and, of course, we have the same agent, and I do know that Jenn has good taste (no, I’m totally not biased!), so that helped too.

It’s not much of a secret to folks who follow me on Twitter that I’ve had trouble finishing a lot of books these days. After a while, they all started to sound the same. I’ve had just as much trouble with steampunk books. Most of the ones I encountered took the Victorian theme all too seriously, so were set in largely unimaginative worlds with rather dull people in them who played second fiddle to work houses and industrial revolution grime and oh! look! airships! clockwork! zombies!

Now, there’s stuff that does this right – Tim Akers’s work and of course, China Mieville’s come to mind – and I’d wager that’s because, to my sensibilities, they lean harder on New Weird than traditional steampunk. Also, you know: they have characters in their books. You know, those things that use the technology and inhabit the world.

So I was delighted to read Mechanique, which is a sort of mash-up between, say, The Etched City, and some bizarro Angela Carter novel you’ve never read.

Mechanique is a wonderfully weird romp that follows the career of a peculiar group of circus folk across a perpetually war-torn world (yes, you can tell already that I must have loved it). They are guided by their ringmaster, “Boss,” a woman with a macabre talent that allows her to bring back the dead and reshape and preserve their bodies with copper. This circus and its core performers are infinitely old… and infinitely screwed up.

What’s often lost in the presentation of an “idea” in a novel (like, say, “What happens when a woman gains the power to extend lives and bring back the dead”) is that the people component is missing. Good speculative fiction isn’t about ray guns. It’s about what having ray guns does to us as people. How it changes us. For better or ill.

Mechanique pulls no punches in this regard, and the way each of the performers comes to the decision to die and be remade – and continue living this way (or not) – is equal part compelling, appalling, and inspiring. Many of these people were former regular-folk-turned-soldiers, thrown into a world of death and dismemberment during the long and continued crash of empires around them. They are shaped and appalled by war, by their own crimes, by their own methods of coping in this blighted world.

One of the things I like to do on this blog is critique the gender dynamics of novels, but Mechanique does this wonderful thing where the story was so very much about unique individuals that slap-in-the-face lazy writing when it came to gender roles was either not there or just completley invisible to me. Sure, the many of the guys are strongmen, and many of the women are aerialists, but not all. Their leader is a woman, and the two most heroic figures in the novel (both women) are so fully realized that  I simply found myself hurriedly paging through the last thirty pages of nail-biting suspense to find out what was going to happen – with not a grumble of a critique about lazy writing.

And perhaps that’s really why this book was so powerful, for me. Beyond the fully realized characters and awesome world, the writing itself was crisp, evocative, and compelling – not a lazy word or careless infodump in sight.  In fact, my greatest anger while reading this book was when I looked at the spine and realized it had come out from Prime, a smaller publisher, instead of one of the larger ones. If the big publishers are passing on amazing novels like this one, the rest of us are fucked.

So go out and support the full awesome that is this novel. Pick up a copy. Preferably two.