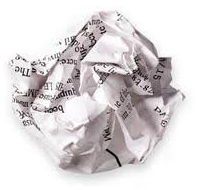 I’ve reached the point in RAPTURE where I’m excising a bunch of stuff I really liked. I mean, it’s not all vital to the plot or the story or anything, which is why I’m cutting it, but man – it’s stuff I like.

See, when I’m thinking about a book I’ll often write little snippets of dialogue and disjointed scenes and then toss them into the manuscript file at the end for incorporation later. Then, as I put the book together, I pull from the pool of scenes and dialogue as they occur in the story. But as you run out of book, you know, you start to run out of places to put this stuff. You also start to realize that all those fine, witty bits of dialogue and fights scenes really don’t have a place in the final book. It sucks.

Here are some examples of what got cut recently, in no particular order:

But she got prettier by the day, with every frown, every tangled gray hair. He’d thought she was the most beautiful woman in the world, once. Then the rest of the world started to love her too, and some of the shine had worn off.

“I once knew a cook who worked the black,” Nyx said. “Could skin a cat in three minutes and served dogs, yeah – shifter and standard alike. Once saw him cut the head off a dog’s hindquarters and haul the dog half back inside.”

“Did you report him?”

“Hell no. He made the best roast dog in Nasheen.”

“She’s a good, beautiful woman. There is such a thing. Not all of them are rotten.”

“I’m living proof that you don’t have to be pretty to be bad,” Nyx said.

“I’ve always preferred running after the scary ones,” Sabah said.

“Not me,” Ahmed said. “Rotten women have rotten hearts.”

Nyx snorted. She bet her left lung that Ahmed hadn’t bedded a woman in his life.

“You were happy enough to chat her up until I got there first.”

“When the hell did you become so mercenary?”

“I learned from the best.”

“You’re goddamn right you did.”

“You don’t know what’s out there… what I’ve seen.”

“Nobody remembers how a war starts,” Hanife said. “No one will remember this one began with an incompetent magician and a foolish mercenary.”

“Not old enough to bed somebody as old as your mother.”

“That just makes it worse.”

As it was, the hedge witch had agreed to slather them down in salve and administer an antidote to the poison that took the worst of the edge off. Her fathers took it with them into the desert, she said, in case they were desperate enough to eat the bugs that poisoned them.

God, he stilled loved her – even after all this time. Long after a better man would have left his boyhood stupidity behind.