The Unreasonable Weight of Being 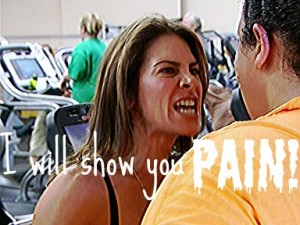 Some folks might know that I’m a Jillian Michaels fan. I mean, how can you not love somebody who kicks people’s asses all day, screams at them to suck it up, and then provides a thoughtful psych evaluation on them after she’s beaten them raw?

I was working out six or seven weeks ago and listening to one of her free podcasts, and she said something, only half-joking, like “If everybody would just do everything I tell them to do, they’d have no problems.”

And I thought… well, fuck it. I’m just going to do whatever the fuck Jillian tells me to do, because nothing else is working.

Physically, I’ve had a rough couple of years, mostly due to my extended-honeymoon-eating-fest, new day job that no longer requires me to bike to work, and some surgeries that left me down for the count.

Low-carb alone wasn’t doing it for me anymore. I was too addicted to high calorie items like nuts, cheese, and whipping cream, and when you’re eating a dessert every night that’s 1200 calories (what? It’s whipped cream mouse! Low carb! DELICIOUS! Yeah, didn’t figure out that calorie amount until I actually started… counting calories), no amount of working out (unless you’re clocking in three hours or more) is going to be able to help you.

The working out, I already had down. So I just made a commitment to getting in 60-90 minutes a day and logging it to make me accountable for it. So instead of 20 minutes here, 20 minutes there, I was committed to daily strength and cardio work.

I’d always known the calories in/calories out thing before, but I just didn’t buy it. See, just like calculating how much insulin I take based on the number of carbs I eat and my current blood sugar number, weight loss is supposed to have… well, not an exact formula, but a general formula that’s calories in, calories out. Balancing my blood sugar, though, taught me that trying to use that math to precisely predict what my body was doing was hopeless. However, if I came to it with the expectation that I was going to be getting an approximation of what was really happening instead of an exact number-by-number results, I’d feel better.

3500 calories might equal a pound, but just because you burn 3500 calories doesn’t mean you will burn a pound. It makes it more likely, sure, but saying “FUCK YOU I BURNED FOUR POUNDS AND ONLY LOST TWO THIS IS BULLSHIT” becomes more likely when you think of it that literally. That was the problem I always had with doing it. I watched people starve themselves on 800 calories a day and plateau, then go on huge binges, then gain back more than they lost. The body doesn’t like trickery. It will fuck you right back – the t1 diabetes has taught me that. Most mornings, my little formula of 1 unit insulin for every 15 carbs ingested might work. Others… I might be shaky and sucking down juice at 8am. No discernable reason (oh, I’m sure there’s a reason, but we don’t understand the individual vagaries of bodies enough to calculate all of the relevant variables. We can only go by the most obvious ones).

Instead of expecting precise miracles, then, I expected approximations. I calculated my BMR – basic metabolic rate. It said that on an average day, a person of my height and weight burns about 1900 calories. So, ok, that’s a starting point. My goal, then, was to cumulatively eat and/or burn enough calories that I was getting less than that each day. 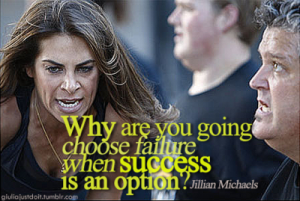 But there were two important tricks here that I never did before on my other eating regimes. Only one of them is totally Jillian-approved.

First, I’m not allowed to go below 1400 calories. My goal is 1500. Crazy people may go as low as 1200 (::shudder:: ) but anything less than that and you’re well into starvation mode. That’s the point where not only are you hungry all the time, but your body kicks all the shit into gear that halts weight loss. We’re not meant to starve. We’re meant to hang onto fat. And I have a body that is very efficient at doing just that. I suspect it does it with even greater efficiency than most people. That’s one of the big reasons I avoided low-calories diets. I was also prone to bingeing. If I went hungry, bad things happened.

So there was one more thing I did here to fool my efficient body into easing back to my maintenance weight. I added in a meal one day a week where I was allowed to eat 1,000-2,500 calories more than my 1500 goal. So one day a week I’m eating anywhere from 2,500 to 4,000 calories that day. Jillian would not approve of this level of consumption (she’d recommend a day where you’re eating maybe 300-500 calories more), but it works very well for me.

Some of the changes were easy, like switching to non-fat lattes and reduced fat cheese and making a greek yogurt mousse instead of one made entirely of whipping cream. Others, like switching from Crystal Light and Coke Zero to water, and throwing out all my “snack” cheeses, were a lot harder. Worst of all, though, was getting used to cooking with cooking spray or 1tbs of olive oil instead of huge amounts of butter and olive oil… and bacon. We ate that stuff like liquid candy (WHAT?? IT’S LOW CARB!!). Also off-limits were the three-kinds-of-cheese-plus-bacon-plus-roast-beef wraps I liked to get from the cafeteria at the day job for lunch. Now it’s Chipotle, generally, with my usual carnitas fajita bowl (no rice, no beans, no cheese, plus guac) for 505 calories a pop.

At the end of the day, doing the one thing I didn’t want to do finally worked, and I dropped 20 lbs and can now fit comfortably back into 80% of my wardrobe.

But short-term drops aren’t really what I’m looking for. I’m looking for a way to not let this happen again. I’ve spent my whole life vacillating between 185-250lbs, and you know… I’m tired. I’m tired of having four sizes of clothes in my closet. I’m tired of thinking about it. I’m tired of dealing with it. I just want to find a weight and stick with it. Before I met J., I’d managed to maintain a very nice weight for myself for nearly two years. It was workable and relatively easy. I still got to eat pizza occasionally and I worked out regularly. But when Life Things happen, I inevitably get out of my routine, and things go sour. 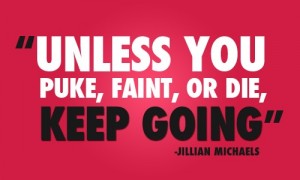 So I’m turning to Jillian’s advice for that part of it, too, because, let’s face it – I just have no idea how to maintain a single weight for more than two years. As soon as the wacky Life Thing happens, it throws me out of whack, and there I am, with a closet full of clothes that are either too big or too small for me again. The other problem with calorie counting is that, you know, it’s not some fad diet thing. It’s something you have to do forever. If I want to stop fighting my body, I need to track my calories in vs. calories out every day, and ensure that, on average, I’m not eating more than I burn in a single day, without going below my 1500 base (or, when I get to maintenance again, my 1700). That’s the only way to manage it.

Ideally, of course, I’d just get to the point where I don’ t need to track this stuff anymore. I’d get so good at calorie counting and automatically knowing about how much of X type of exercise burned so many calories that I could just keep it all in my head. But I don’t trust myself to do that. It’s basically how we all do it now, and for me, as for most folks in the U.S., my guesstimate is so laughably wrong it’s… yes, laughable. Also, wrong.

So, I went against all my principles and started calorie counting and exercise logging, which is a lot less painful these day because of apps like MyFitnessPal, which keep me accountable. And this is where I’m at after nine weeks or so. Back down to a reasonable weight where I look slightly less like a mushroom, and another ten weeks or so from maintenance weight. I also feel like I’m in a better place for additional physical activity, because honestly, one of the other reasons I made the switch is because it was getting harder to move around all that extra weight when I was exercising. I felt physically weaker because my body was being asked to lug around more.

There is no particular point to any of this, of course. On my deathbed I won’t be all like, “Thank god I started counting calories!” or “If only I had lived my life at a size 6!” In fact, I rather like myself as I am. But there are some cold, hard realities I have to face when living in a world that tells me that a 2,500 calorie burger-and-fry combo is a normal meal, and sitting at a desk all day is a normal way for a human being to spend 9 hours. None of these things is a reasonable expectation, and to counteract them, sometimes you have to do things that may, on the face of it, seem unreasonable.