If you say you want to be a writer, people will tell you to write. That’s sound advice. Writers write shit. But what a lot of folks fail to mention is that there are plenty of people writing hundreds of thousands of words a year who just keep writing the same shitty words, the same shitty books, the same shitty unpublished (and sometimes published) shit. They never get any better. It’s just churn.  They stagnate.

Back at Clarion, Carol Emshwiller said something I didn’t really understand at the time. She said, “Practice doesn’t make perfect. Practice makes permanent.” But wait, I thought, wasn’t I supposed to practice? Wasn’t I supposed to churn out thousands and thousands of words so I could be a better writer?

There’s a difference, however, between practice and active practice. I remember, back in sixth grade, having a really shitty homeroom teacher who also “taught” us math. He was three years from retirement and so didn’t actually “teach” us anything. He handed us the book and had us check our own assignments. But there were no grades. You just had to turn something in. So I would turn in these homework assignments with 28 out of 30 questions wrong. I’d just turn in them in with the bad answers, clearly demonstrating that I had no idea what the fuck I was doing, and he’d just count them as being turned in. So I passed math class.

The life lesson there was “just show up and we’ll move you through.”  And it’s true that a great deal of success in life is just showing up. I’ve been astounded at how often people wanted to hire me on after a temp assignment because unlike the other candidates I had “shown up every day” of my two week assignment. This is bare minimum shit here, people. 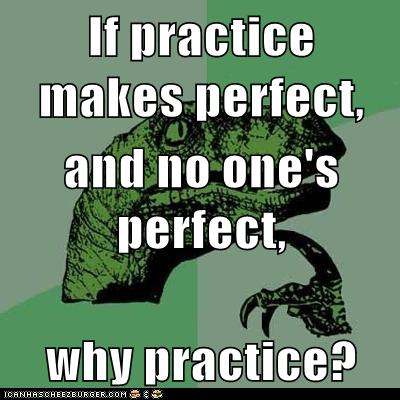 Writing can feel like that sometimes. People will even tell you, “Just write and submit a lot of stories. At some point, something will hit.” For years I felt like the proverbial monkey at the typewriter, just hitting keys until something resembling a story came out.

I suspect much of this is bleed over from my work at the day job, where I’m creating marketing emails (and other types of marketing materials) all day. Because we have data on what types of emails work (and what parts of them, like the subject line, body copy, call to action placement) and what types don’t, it forces us to stop sending out shitty, underperforming work. If something didn’t get a response, you don’t just send the fucker out again. You find out where it wasn’t working, fix that part, send again, find out what’s not working the next round, fix it, send it again… until you have every piece of the email working, and you’ve improved your response rate.

You don’t just “practice” writing the same email over and over. That’s idiotic.

I’ve applied this method to my fiction now. I’ve been intensively studying books and television shows that do plot right. I’ve sat up going over and over scenes from Abercrombie’s Best Served Cold a dozen times. I even went through and mapped out how the character POV chapters were setup. I did the same with the prologue to The Wheel of Time, studying that fucking thing until my eyes crossed. I’ve spent so many hours watching Swamp People, you’d laugh, but the show’s ability to create stories and narrative out of the repetitious task of shooting alligators for 30 days is something you can learn from.

And then I took all these things I was learning about narrative, and I sat down and wrote a book. I was supposed to be simply rewriting a trunk novel of mine. But when I met with my new agent in February about it, the changes she suggested to the novel and the series pretty much meant torching the whole thing. I didn’t know it at the time (I might have balked if I did), but I was going to burn the whole thing down, keeping just six (heavily rewritten) chapters from the original book.

I ended up writing a 160k novel from nearly the ground up in about 6-7 months.  It all had to go, because as I came up on a lot of the old scenes, I realized they didn’t do anything. I’d workshopped the book before, and knew the plot needed help, but I don’t think any of us realized how much. Every scene I came to was just people talking. People wandered through the narrative, like it was some travelogue.

So I sat down and started applying what I’ve learned the last five years about plot and structure. Scenes are not just people talking, or killing something. Scenes are about two people who want something, and are in conflict with one another (or the environment). Oh, sure I’ve read all the writing advice all day that tells me this, but unless I actively practice writing scenes this way, all that advice is so much horseshit. I’d “known” scenes were about conflict for twenty years. But I had never actively practiced applying them to every single scene in my fiction. It was more a haphazard guideline, hovering just out of sight.

Every scene became about figuring out what somebody wanted, and what the person they talked to wanted, and sure, you have to relay information during that scene too, but you can’t forget the conflict, the tension. It’s the tension that keeps us reading. We’re watching a tug-of-war. We want to know who’s going to win (I must also note here that this is a very Western story structure. But I want to learn typical structure before trying to subvert it on occasion. And I can’t subvert something if I’m not already excellent at it).

That isn’t to say that I didn’t write this way before. I applied a lot of the “What does X want and how is their goal in 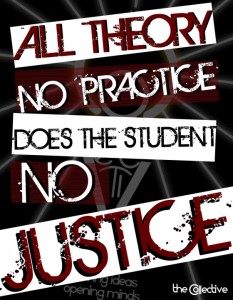 conflict with Y’s goal?” while writing my prior books. But this was the first time I had to do it with such a complicated plot, with over 70 named characters, over 160,000 words of story.

Right before starting line edits, I finished the last episode of the first season of Orphan Black (one of the best shows on television right now and you should be watching it) and realized they had been smart enough in the end to given all of the primary characters a story arc. I smacked my head and forged back upstairs and went through the last fifth of my book to ensure that *every* POV character had a full arc where they changed from the person they were at the beginning of the book to somebody a little different.

These might sound like “duh” things for anyone who’s been writing or reading writing advice for years. But there’s a huge difference between knowing a thing and doing it on accident and doing a thing on purpose. I can spout off writing advice here all day about tension and conflict and character arcs and plot. And I can write books where I stumble into these things on accident (my first two books, mostly). But when I shifted from stumbling into narrative and actively being aware of doing these narrative things, something in my head clicked.  It was an awareness that good stories were not magical accidents or my monkey-self banging on keys, but the result of actively practicing until you knew how to construct a narrative the same way you would build a math formula to solve a problem.  It wasn’t magic or talent, it was hard fucking work.

I’ve talked before about hard fucking work. No doubt there are writers with a better ear for narrative and plot that I have who never had to actively study books and other media to work it out. They just absorbed it. For a long time, I figured I could get away with just absorbing instead of studying, too. But just waiting to pick up something through osmosis is highly fucking stupid. I couldn’t pick up math through osmosis. Why on earth would I think I’d figure out narrative? Life was too short, my time was too short, to just hope I magically got better through banging on keys.

After rewriting/writing that book, I’m feeling pretty wrung out. It’s off to my assistant now to input the final line edits, then off to my agent for review. It will likely come back with more edits from my agent to help create an even more compelling narrative.

Because here’s the thing with this writing gig, and it’s something I’ve noticed more and more the longer I’ve done it. Anybody can type up some words and put them online. I’m doing it right now. But standing out from the reams and reams of books published every year (not to mention reams of blog posts) is getting harder and harder. I go on Twitter and it feels like there are five or six “book birthdays!” a day getting tweeted, not to mention retweets about other books, new books, free books, free samples of books, and on and on and on.

What this means is that I need to get better. I can’t just have some great worldbuliding and the ability to string sentences together. I have to get better at the stuff I suck at and become the best at the things I’m already good at. And that’s… tough on my head some days. It’s also tough on my increasingly busy work schedule. I’ve got a day job, and freelancing work, and I’d like to take up a Kickstarter soon, too. That’s an astonishing amount of work for me, because I also need to keep up on my research. The bucket of ideas doesn’t just come from nowhere.

At this point in my career, I’m done with practicing. There’s no more shitting words onto a page and hoping a novel comes out. I don’t have enough free time anymore to just dicker around. Everything I do has to be building toward getting better – either becoming the best at something I’m good at or becoming good at something I suck at.

What kills me is that this isn’t something you can just wake up and do one day. It’s not something I could read in somebody’s writing advice and go, “Hey, I should really do that.” It’s just something that you do when you’re ready to do it. If you’re ready. Lots of people do just fine with what they’re doing. But what I’ve noticed is that there are a lot of writers who, mid-career, will say “Gosh, my books aren’t doing as well anymore. Maybe I should work on being a better writer.” Instead I’ll hear folks talk about how marketing fucked something up (and they certainly could have. But for five books?), or distribution is screwed up (for eight books?) or give some other external reason that resulted in books that aren’t selling anymore.

And you know, I don’t want to get eight books into this and go, “Why don’t any of my books sell more than 10,000 copies?” and then realize that for the last eight books, I’ve been writing the same books in the same way. I want to get better. I need to get better, if I’m going to survive in a publishing business that moves at the pace of, well, publishing, in a world that increasingly moves at the pace of Twitter.