It’s perhaps not a huge secret that the last couple of years have been rough for me on the writing front. Writing careers are sticky things. They move slowly. Ever….so… slowly. For an impatient Twitter addict like me, the slow crawl of writing a book – let alone publishing one – can be agonizing, and the longer I slog through it, the more I understand why even established authors are happy to self-pub. Your work gets to market faster and you have a lot more control over it. Getting a check from Amazon will get to you faster (and with less yelling due to clerical errors) than one from many publishers. But it also comes with a shit-ton of work.

Work. Have I mentioned how much work I do?

I had a colleague email me the other day to check in and when I said something about my day job, they expressed surprise that I still had a day job and said something to the effect of “I’m not sure how you can do all that you do and still have a day job.”

Honestly, I don’t fucking know either. Some of this is just really good time management. And some of it is simply that I’m working all the time.

“I can tell them how you do it,” my spouse said. “You are writing all the time, except for the six hours you crash once a week to watch marathon episodes of Swamp People or Storage Wars.” (I’ll note that even then, I’m often working on line edits with the TV on in the background).

After I finished RAPTURE in May of last year, I went through a few months of being angry at the hand I was dealt. As one of the many, many writers caught up in the slow crumbling of Night Shade books, I was writing work that I wasn’t being paid on time for, and by November, wasn’t being paid at all for. That’s work I was staying up until 2am some nights working on. RAPTURE took 14 months to write, and those last few months, I was putting in 30 hours a week on it in addition to the 40 at my day job and the 10 for freelancing and another 10 in research.

I parted ways with my agent in August and kind of gave up on things for awhile. I started teaching a copywriting class which completely ate my 30-hours-a-week of writing time (and for less money, which is kind of shocking considering the state of the typical book advance; I have deep sympathy for teachers). I dinked around with a couple of projects, wrote some proposals, queried some agents, and then just took on some more freelancing work.

In February of this year, I partnered with a new agent, Hannah Bowman, largely because we clicked on things like career strategy, and she has a very good editorial eye that I felt I needed to help push my career forward (it also helped that she was a big fan of the Nyx books).

It so happened I had what I thought was a pretty marketable epic fantasy trunk novel. And Hannah had a lot of smart feedback, really good feedback that would result in huge but necessary structural changes. So in February I started burning the book down chapter by chapter. Every time I thought I was just going to rewrite a chapter, I ended up throwing it out. 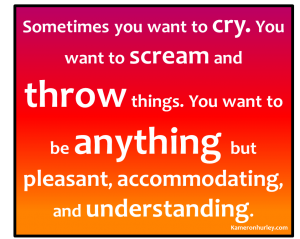 So began seven months of burning down and rebuilding an entire book – then 120k (now 160k) – chapter by chapter, adding new content, fleshing out characters, creating character arcs, redoing all four crit path plots, and adding actual worldbuilding. And from the ashes of the old book, something else emerged. Something a lot better.

Toward the end, I had to sign out of my social media channels for four or six weeks, because every time I went on Twitter or Facebook, I had to read about other writers’ new book birthdays, or movie deals, or foreign rights deals, or six figure advances, and as happy as I was for them, all I could think about was what a failure I was for writing a book in the long, epic time span of… seven months. While continuing to keep my day job and my freelancing work.

I broke down and hired an assistant a couple months ago. I was able to justify this because of the freelancing work, which basically funds the help of my assistant so I can write books just a little bit faster.

You’d think that finishing that book would feel great to me. But this is writing. Nothing is ever done. The minute I finished the book and passed it off to my assistant to get the final edits in (well, final until my agent sees it, and then we start again), I was already jumping down the throat of the next project. I had to stay busy. I needed to start the next book. I was already so behind…

Being patient in a game where you’re only as good as your next book contract is rough, but the roughest parts are the shit that you don’t talk about on Twitter. The roughest parts have nothing to do with writing, even. It’s the call from your former agent saying that your publisher has, once again, misplaced a chunk of money. It’s arguing about foreign rights sales (or lack thereof). It’s the feeling that if you don’t fight for the best deal, if you don’t get smarter about the business, you’re going to be a one-book writer (yes, even after writing three books, I feel this way) or die in poverty.

I know some of this obsession with work is a direct result of the incredibly bad place I was in when I first came to Dayton – homeless, unemployed and living on expired medication for my chronic illness, with all my shit packed into a truck. I have been in a very bad place that I don’t want to be in again, and some days it feels like if I can just be smarter, and work harder, it won’t happen again.

But this is a fallacy. It’s a very American thing, too. You just have to work harder, right? Heh. My day job goes through periodic layoffs every 4-6 months. You can imagine the sort of stress that places on people. I make good money now, but a lot of my “extra” money is still going toward paying off debt from when things sucked, and toward student loans that got me the degrees that helped get me considered for said jobs. So there’s no nest-egg except what’s in 401(k), and I don’t intend to ever, ever cash that out early again (yes, I had to cash one out back in the laid-off-expired-drugs-days). There’s paying off debt, going to cons (biz expense) and a trip a year to do something crazy (paid for in cash). But there’s no cushion if the bottom falls out. No cushion but the books. And the books are slow fuckers.

Sometimes I look at my taxable income and I wonder why on earth I worry so much about money. Because month-by-month, I’m more than fine. When you can afford to pay for unexpected car repairs without getting a payday loan, you’re rich, in my book. But you know? I felt OK financially in Chicago, too, until I was laid off and saddled with a chronic illness within a few months of each other. 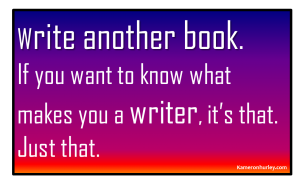 So while most people are out looking at writing advice, I’m either writing or getting depressed about the backend of publishing. I get that my situation is kind of special in publishing, but every time I think it’s over, it just gets more special. Sometimes I really wish I’d turned down that $7k I was owed and just got the rights back to my books. But that would have put the UK release of my book in jeopardy (I should note that publishing with Del Rey has been nothing short of delightful), so I stayed, and now I’ll be dealing with these issues for the entire shelf-life of my bel dame books.

Sometimes you want to cry. You want to scream and throw things. You want to be anything other than pleasant, and accommodating, and understanding.

You want to do anything but write another fucking book.

But you write another book.

If you want to know what makes you a writer, it’s that. Just that.

It’s writing another fucking book, even angry and disappointed and filled with despair. It’s holding onto the crazy idea that maybe, this time, this one, will change everything.

It’s having the crazy business sense of a gambler, and the heart of a grim optimist.