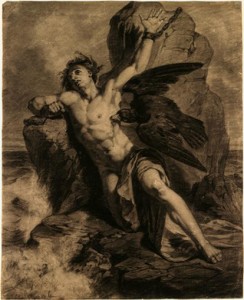 NOTE: This post assumes you have already watched Prometheus, so is full of SPOILERS.

In the world of Prometheus, we all came from white dudes, who went around seeding the universe with their magical, life-giving sperm.

It was a fine feat those boys managed, creating whole worlds all on their own. I can’t help but wonder if it’s the secret dream of the filmmakers, to just go on creating whole worlds: movies, books, video games, work places, without the troubling influence of all those annoying females.  Unless they’d like to rent out their wombs as incubators for alien sperm. Cause that would totally be OK.

There’s a lot going on in this movie, and this post here already does a fine job of delving into some of the nitty-gritty of the imagery and the perhaps-this-is-what-the-fuck-is-going-on-ness that gives the film makers perhaps more credit than what is due.

But what I want to talk about here is the thing that didn’t really wig me out until a couple days after I watched the movie, a movie I did actually quite enjoy (this post to the contrary, I know).

The thing that wigged me out was this:

This happens so often that I barely even noticed it while I was watching it. I’m so steeped in Greek mythology and Abrahamic religious texts that it just breezed past me on first viewing. It wasn’t until I was reading an oldy but a goody, When God Was a Woman, last night that I realized how incredibly fucked up it was to posit the creation of an entire species without the aid or involvement of women. Since, because, yanno… women create people.

It’s been a coolly calculated thing for some time, this erasure of the importance of women from the actual act of birth and creation. You might think that’s nutty and totally impossible because, hey, women make babies! But you see it a lot in the Greek god myths – lots of people sprouting out of people’s heads, and being ripped from people’s sides or grown from some guy’s lopped off cock. It happens a lot in the origin myths we grow up with, and it’s totally fucked up.  You even hear it a lot now, any time somebody says, “Hey, women should have choices about when and how they give birth, since they have to spend 9 months giving their body’s energy and their lives over to creating all the cool things necessary for a zygote to become a person” and then somebody cries, “But it takes a man’s sperm to merge with the egg first! Men are just as important in the creation of people! Let’s talk about men!”

Whoa, boy. Here’s your zygote, then, dude. You have fun turning that into a baby.

So of course, in this movie, our forebears are white guys – very much gendered as guys, with big bulging muscles and everything. They aren’t the willowy, androgynous type of aliens that you could argue just reproduce via parthenogenesis. No, these are definitely guys. And white ones, which… yeah, that’s a whole other rant right there. So these aren’t just any guys, but “Engineers.” And like any guy trying to build something, they’re shown as also being very good at creating stuff that destroys things. Like guys would do, of course. Right?

But wait, you might say, didn’t our archeologist/geneticist heroine give birth to the proto-alien?

No, no, children. Remember: she was sterile. All she did was incubate the Magical Man-Sperm. The way women do.

There is so very much old-boy Greek mythology running amok here that you might get a little overwhelmed if you think too hard. For a movie that I enjoyed because it actually had three female characters, offering us a somewhat diverse number of female heroines, they got pushed aside a whole lot in this particular creation myth.

Creation myth the first: The opening scene is of a guy-alien drinking some magical sperm, then bursting apart and forming the building blocks of life. Creation the second: guys walk into area with weapon-tubes in them and set off life-reaction, which then infects two guys. Creation the third: robot alien (also gendered male) infects human guy with life-stuff, who then starts bursting apart to form said life but is eventually burned up by a woman. Creation the fourth: guy with life-stuff impregnates a barren woman with his magical worm-sperm, which then uses her body like a vessel, and attempts to burst forth from it.

In fact, when it comes to creating life in this myth, women are only involved as vessels. Oh, sure, you might say, this is just a carryover from the other alien movies. Everybody’s a vessel. But it’s not. It was a deliberate choice to create large, gendered white guys as our creators. It was a deliberate choice to make Shaw barren (which likely means she does not ovulate), so that any alien child issuing forth from her body is not, in fact, a mix of her and the life-stuff, but just the guy’s magical life-sperm threatening to kill her.

In fact, the only partially creating-like moment Shaw has is when she asks to have the thing ripped out of her by asking for a “Cesarean” instead of an abortion.  The more appropriate thing for her to have asked in a movie like this is for an abortion.  Maybe the filmmakers got too squicked out about that.

Even at the very end, when Weyland’s daughter is finally freed by her dad’s death and could go on to build the corporation back up herself and become the head of Weyland and be our Big Bad in the next set of movies as she goes about trying to harness the alien life technology for herself, she dies stupidly instead. Cause heaven forbid a woman in this world goes on to live and create something, even something terrible.

There was a lot of fun in this movie. Shaw’s surgery scene has been lauded as awesomely horrific, and I like to handwave the whole part where the machine would not have actually sewn her womb back up because it wouldn’t have registered she was a woman, being only “calibrated for men.” She would have bled to death long before those staples came out.

Some folks have rolled their eyes about the whole “med pod calibrated for guys only” thing, but look at the wider world of this movie. Look at who created the universe in their world-brains. Look at who does all the life-creating. Why on earth, in this universe created by dudes, would anyone, even in 2098, create a prototype medical machine that was calibrated for women? Women are still the afterthought in this universe.

As our creators intended.

Lots of folks have gone on about how the characters in this movie were totally plot driven. They did things we needed for the plot. Like stupidly taking off their helmets on a foreign planet. Like getting lost in an ancient construction when they’re in touch with a ship who has a 3-d map rendering of their position right in front of them. Like not knowing how to run sideways.

But this is not a movie about people. It’s a movie about gods and myths. If you read this whole thing as one big Greek myth about how we sprouted out of some guy’s head, Chariots of the Gods style, this all makes sense.

If you were looking for a movie about actual humans, though, well… sorry. In a world where your prototype med pods are only “calibrated for men” you’re not going to have a story with actual people in it, just god-puppets, making life out of some guy’s explody head.