Ranting on panels: Just you and a million of your closest friends 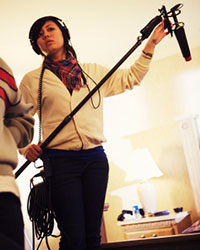 The first panel I sat down to watch at WorldCon had a panelist lob out a sexist comment about 5 minutes into it. Also, if I never hear the term “token male on this panel” again, it will go far toward restoring my faith in humanity. You’ll never see me saying I’m the “token female on this panel” because it would lead folks to assume it was true, or to interrogate it, or to question it, like what I said on the panel had less weight than what other people said because hey, obviously, I was indeed the token female. The fact that, as a guy, you can say that out loud and get laughs and not risk further devaluing what you have to say says a lot.

One of the things that a gathering the size of WorldCon often reminds me is that what we say in public is fair game for being repeated in public. Though most of the panels I actually participated in were great and mostly lacking in weird stuff, there were times I was more serious than perhaps I ought to have been and lashed out a bit too defensively to pre-emptively cut off a possible sexist remark. I also tried to speak up when I saw panels I was on do things that always end up getting commented on in panel wrap ups, like the strong female character panels that devolve into discussions of strong male characters.

I tend to be very aware when I’m on panels that there’s a good chance I’m either being live tweeted or will end up getting quoted on somebody’s blog for a panel roundup. So, you know, I do make an attempt to be clear and honest with what I say, and not be an asshole.

What did surprise me this time was that somebody came into a religion panel I was on with a mic boom and camera to record the session – without doing the panel the courtesy of asking if we’d like to be filmed.  So now it looks like even that particular courtesy is out the window… and let’s also remember that there’s always a chance that somebody at the back of the panel is filming the whole thing with their cell phone.

I often think that we assume panels are small, intimate affairs where it really is just us and maybe forty other people. And for some reason, folks have taken that as an excuse to behave badly. There’s an astonishing amount of casual racism and sexism on panels (at one point I used the term “developing world” in discussion and cringed at myself for it); but I’d like to think that the more people are called out for those comments, the more aware we can all be of them, and eliminate them.

When I threatened to live-tweet a fellow writer’s panels the next day, getting an idea that it was going to be very problematic from some conversation we had the night before, I was delighted to discover that someone had, in fact, live-tweeted it for me in all its cringe-inducing glory. Sometimes it’s scary to be the “bad” guy who reports the bad behavior. But it’s worse to be a bad guy – either on purpose or in ignorance. Best to be called out and/or made aware of it than continue to be an asshole, right?

I like this transparency. I like knowing that I have to think about things before I say them, and that nobody’s going to let me get away with being lazy. But as I reviewed some of the panel wrap-ups and followed some of the tweets, I wondered how many other panelists realized that what they were saying wasn’t necessarily as impermanent as they thought.

Somebody is live-tweeting this. Be sure you’re acting in a way you want to be remembered.