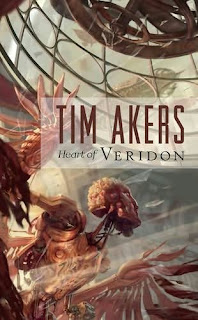 I picked up Heart of Veridon, by Tim Akers, quite by accident. I was actually looking for Graceling and something by somebody named Connelly. I couldn’t find the Connelly and once I picked up Graceling, the prose on the first few pages was just so dull I couldn’t get myself to buy it.

Veridon was sitting on the shelf with the cover facing outward, and who isn’t going to pick up a book with a rotting, menacing, mechanical angel on the cover?

So I did. Read a few paragraphs.

I didn’t even get to the end of the first page. I bought the book.

Way more readable than anything by Mieville, and far more boneshaking than Boneshaker (which has, alas, been consigned to the bottom of my reading pile after I discovered there’s very little in this book that’s shaking my bones, 70+ pages in).

In Heart of Veridon, our protagonist is Jacob Burn, an outcast “noble” with a bum reconstituted Pilot’s engine in his chest that once allowed him to fly zepliners. It’s basically a steampunk version of hooking into a spaceship and becoming one with it in order to fly it. After getting cast out by his family, Jacob’s been doing odd jobs for a shady crime boss named Valentine, which has led him on board the particular zepliner, Glory of Days, which we find ourselves on in the beginning of the book.

Suffice to say, Glory of Days doesn’t quite make it back into Veridon, the city at the heart of this novel. It’s hijacked by an unknown group or groups of people who go ravaging through the ship. With his dying breath, an old acquaintance of Jacob’s who he bumped into on the ship hands him a mysterious Cog – basically a religious relict in this world – and tells him to bring it back to the city.

It’s a fantastic novel opener, and things just keep going. I love the worldbuilding in this book, and the religions are… beautiful. I have never seen gods and religions done with just this right blend of sadness and creepy.You see, there are things in the world of Veridon that its residents did not and do not understand. Things that we, the reader, still don’t understand, and so they worship them. They create entire temples around them. It’s the first time I’ve convincingly seen gods created out of what are, quite possibly, advanced/aging races and/or their relics. What I love about this is that is speaks so… poignantly about the human need to make sense from nonsense, to control what they don’t understand and completely botch it in the process, and to worship what we fear in order to feel that we have some control over it.

Now, I have a lot of love for this book – I stayed up late last night to finish it, and it only took me a couple days to read because I was picking it up whenever I had a spare moment – but it does have its flaws.

The female lead carries a sword and a shotgun at one point. She’s tough as nails, full of secrets, and has no qualms being a whore, to boot – and I was desperately hoping Akers would pull an Ever After at the end of this one and she wouldn’t need any saving. But, well. There are two more female characters – both tough, calculating, and vindictive. Neither has a great end. I was secretly hoping that one of them would break free and just torch the whole fucking city. You’ll know which one when you read it.

Bah. This was more than a little disappointing. On the one hand, bad things happen to pretty much everybody in the book. On the other hand, there aren’t a whole lot of female background characters, so these were the only ones I had to root for, and they were pretty badly treated there at the end. That said: they were certainly cool enough to root for, and disappointing as the ending was in that regard, I appreciated a book that gave me a full cast of fleshed out characters.

There were a couple of annoying structural flaws. The first was that Jacob keeps repeating what’s just happened to him to characters not in the know. We have to sit through his version of events every time he fills somebody in on them. It got old, even when it was over in just a couple paragraphs. A one line, “I filled him in on what happened,” would have been fine. Overall, folks sat around and talked a little too much (as a writer, I felt I recognized this is as the writerly, “Holy shit, a lot of shit just happened. I’ll have my characters sit around and figure the plot out while I take a breather.”), and there at the end, the bad guys were actually *inviting* Jacob to ask them why they did what they did, you know, so they could exposit their reasons for being so bad. It was the classic bad guy monologue. It was a little silly.

Finally, there’s Jacob’s motives. There at the end, I was just like, “Dude, give up already! Give him the relic and have him destroy the fucking city!” (OK, yes, I may have been on the side of the chick who wanted to burn the city to the ground. But if I’d been fucked over so much by this city, it’s what I’d want too. I was totally on her side. It’s a creepy city). Jacob’s motivation for wanting to save the city was… strangely absent. I kept looking at what people had done to him, how much he’d been screwed over, how toxic and creepy the place was, and I just couldn’t figure out why he kept going when any reasonable person who have stopped (especially at the end, when he’s fighting this crazy rotting mechanical angel in a scene that, oddly, put me in mind of the end battle between Deckard and Roy in Bladerunner).

Overall, the characters were put together very well. Everybody had their own secrets and motives – many of which weren’t even totally revealed at the end. They were complex characters. I remember being struck, in the beginning, at how Jacob’s voice would weave between street tough and educated nobility. It really did that. I initially thought this was a clunky first-time novelist mistake, until I realized that, in fact, the character had been raised a noble and simply spent the five or so years in exile as a street tough. The strange voice changes made a lot more sense.

In fact, some of what makes this book such a good page turner is that Jacob is incredibly unpredictable. At one point, when the calvary comes in toward the end of the book, he refuses their help. Yes. Refuses. He gets out and the book goes on and you’re like, “What the hell? That was a comfortable trope you just totally stomped on!”

He makes a lot of mistakes. Mistakes that get people killed and get him into deeper trouble. He’s not a hero, he’s tragically human, and tragically flawed, and it shows every step of the way. I like flawed heroes. Jacob is a good one.

In any case, this is a wonderfully wild ride. Rotting angels, fish people, half-mechanical people, bizarre alien gods, steampunk tech, bug tech, shotguns, outcasts, folks coming back from the dead, folks who can’t die, crazy mods, zepliners, chicks with swords (or, at least, a large knife), and lots of gunfights and backstabbing and double-crosses.

Did I mention there’s a chick with a shotgun? And a totally rotting half-mechanical angel on the cover?