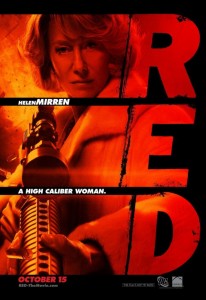 J and I went out to see Red on Saturday night at the cheap theater. The previews were great, but it performed a bit poorly and showed up at the cheap theaters quickly, so I wasn’t holding my breath. This, despite the draw of Helen Mirren as a retired assassin among Bruce Willis’s crew of misfits.

The cast is great in this one, and has a fun time. A bunch of retired CIA operatives find themselves being hunted down… by the CIA.

But the problems with this one start early. It feels like one of those movies where there were just too many hands stirring the pot, so you come out of it with these great big gems of meat, but then there are these odd banana peppers and apple slices in there, and then the stove explodes.

It opens with retired operative Bruce Willis on the phone with a woman at the pension department. Apparently, he’s called her 22 times about missing pension checks. In fact, he’s just been calling to chat her up. She’s had very bad luck with men and dating. They commisserate. Over the phone, he says he’ll be in town soon, and maybe they can finally meet?

She says sure, but call her first. She is a funny, quirky sort of person, and pretty likable, so at least we see some of the appeal for these two.

Well, you know, everything goes to hell the way it does in these kinds of movies, and Bruce Willis flees from assassins who shred up his house. There are some fun fight scenes here. Willis then breaks into the pension lady’s house and kidnaps her, explaining along the way that he’s doing this for her own safety because someone is trying to kill him and she will be a target.

This is a weirdly uncomfortable turn of events for a lot of reasons. First, because it shows an utter disrespect for the female “lead” (such as she is). He doesn’t find a neutral place to contact her and speak to her. Doesn’t even properly explain himself in her house (outside of her house would have made more sense). Can he not call her from a pay phone and set up a coffee date? Nope. No explanations at all. Just bound and gagged and thrown in the car.

Ick, right? Ick because you also know she’s going to be his love interest, which means she’d be falling for her captor.

We get quite a lot of this ick before she frees herself and is then assaulted by a police officer, at which point she realizes that Everything Bruce Willis Says is True, and then she doesn’t have to spend the rest of the movie bound and gagged, thank god. But here’s the thing – couldn’t they have done this up front? Have assassins already in her house? Did we really have to go through the stranger-I-met-over-the-phone-kidnaps-me thing?

The answer is yes, we had to go through it. Because somebody thought it was funny.

That was, perhaps, the most insulting part. That this was supposed to be a really funny turn in the movie. It wasn’t.

You know, I was watching an SNL skit yesterday that was parodying Julian Assange. And he’s wonking on and the audience is laughing along at some mediocre jokes about Mark Zuckerberg and he says something to the effect of, “If somebody made a movie about me, the joke would be trying to keep it rated R!” or something along those lines. The audience goes totally silent. The comedian looks a little surprised, but recovers and moves on to the next joke.

See, that’s the thing. Rape, and accusations of rape, are, you know, not funny. Why are they not funny? Because they are real threats to women. It’s like joking about prison rape in a prison. Not so funny when it’s an actual threat to you, let me tell you.

At any rate, things got better after she got untied and the whole band of CIA retirees gets together. Morgan Freeman and some guy whose name I forget have some OK scenes, though once again, Freeman’s intro is of him coercing a female nurse to bend over in front of him because you know, ha ha, that’s so funny!

The good news is that Mirren’s assassin character may be one of the better developed in the whole movie, which let me forgive some things. She gets an old love affair, some battle stories, and some of the better lines in the movie.

Anyway, the band plots to break into the CIA to find out who’s killing them. Willis gets a great fight scene with one of the operatives trying to kill him (played really well by Karl Urban, who’s also given quite a bit to work with from a character perspective). This isn’t the climax of the film, though. It keeps going. There are some dirty arms dealers, and then a plot to kill/kidnap the Vice President (played by that creepy guy from Nip/Tuck).

The heist bit of the movie really comes together for the kidnapping of the VP (which, you know, is so much less creepy because nobody on the team is, you know, romantically interested in him. Writers take note!). Everybody in this movie was having a fun time (especially Willis and Mirren), I just wish the script hadn’t been butchered to pieces.

There’s some more la-la stuff in here. Fixing this movie would have required clipping that whole stupid kidnapping scene and just cutting to assassins in her house, which neatly avoids about 10 minutes of ridiculous movie time, and abbreviating the arms dealer weirdness, and possibly avoiding the CIA breakin, which is like a second movie climax. Weird pacing all around. Fun, on the whole, but poorly put together from a narrative perspective.