So You Think You Finished a Novel…

I completed all the chapters in my latest novel, EMPIRE ASCENDANT, last night. It’s the fourteenth book I’ve written, but just the fifth that will be published.

There’s a reason I had to write so many trunked novels that will never see the light of day before I wrote ones that did:

I don’t have a natural gift for this, folks. I’m not a genius. I’m here, now, through a combination of very hard work and luck.

Oh, I enjoy writing. I have a mad imagination some days. I can crap out words all day, and I did, as a kid, and I can, as an adult. But plot, structure, scene progression, prose, building paragraphs and sentences, yeah, well… that shit takes work to learn, and I’ve been actively learning how to do it for 23 years. It’s all about work and practice, endless practice, novels and novels worth of practice. Then there are the workshops, the studying of other people’s work, and the concerted hacking of my own process to try and get better. I constantly study plot and progression. I read great books and break them down and unpack them. I read other writers for plot, for humor, for characterization, and for overall amazingness. Then I figure out how they did it, and try and replicate that in my own work.

Some people study opera. Or musical instruments. Or math. I study how to make books. And then I make them.

Yet no matter how well I plan a novel, no matter how much I study, I learn the most through writing. And that means every draft I’ve made so far ends up looking like word vomit. Until I complete a draft, I’m uncertain of the shape of the book. I don’t care how many outlines I do or scene-by-scene breakdowns I come up with – until I know the shape of a book, and the resonances between/among all the characters, I can’t edit it. I don’t edit as I go. If I edited as I went, I’d never finish it. I find this process endlessly frustrating, because what it does is force me to write the book at LEAST twice: one time through just to vomit something onto paper, and the second time to give it an actual structure shape. On the upside, I’ve gotten to the point with a lot of short fiction where I can keep the whole story in my head long enough to edit as I go.

Here are all the places I’ve tagged for major revisions that I need to complete before I turn this book in to my publisher on Sunday night: 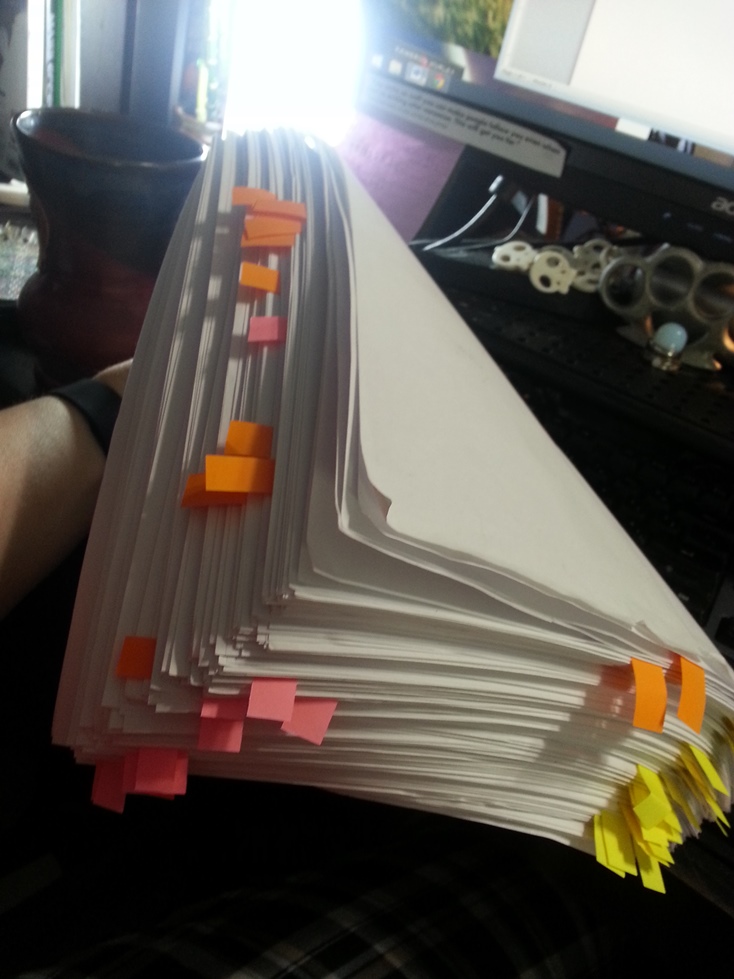 Note that these are only MAJOR revisions, only. The yellow indicates places I made notes while I reread the first draft about inconsistencies, “too much talking,” and timeline issues – I will be adding a lot of duels and monster fights. The orange indicates chapters that were mostly done, but still need some transition paragraphs between various “big scenes” or which I felt were too short or truncated and needed to be expanded. The pink indicate all of the POV chapters for a character whose arc is simply not working (really, it’s nonexistent) – all of those will need to be rewritten; if not from scratch, then nearly.

This does not include the 10 pages of notes from my agent, nor the 20,000 words I wrote this weekend, nor does it indicate the 10,000 words I’m cutting because I’m cutting two POV characters (because I’m cutting that plotline, I also ran into a surprise character death – since I was cutting the whole plotline, I didn’t need that character for book three anymore). But that must be done this week as well. When that’s done the whole thing needs to go to my assistant so she can use it to update the wiki that the copyeditor will use to check characters names, city names, plant names, and the like to ensure consistency throughout.

When all the heavy lifting is done, the book is… still not done, friends. Though I’ll be turning it into my editor Sunday night, when his edits come back and I start his structural edit, I’ll complete that and do another pass of my own for things like: the addition of humor, colloquialisms, scrubbing characters’ speech so they don’t all sound the same, additional character and setting descriptions, and another scrub for inconsistencies, repetition, and word choice so this doesn’t sound so much like a teenager wrote it.

At the copyediting pass, I’ll be looking for gender mixups (it happens a lot in this book. Hmmmm I wonder why?), any more timeline inconsistencies, general typos and incorrect figures of speech/speaking that I missed the first time, more repetition and prose scrubs, and etc.

By the time we get to page proofs, all I should be doing is fixing the last of the pronoun mixups, typos, and crossing my fingers and praying we got all the big stuff on some other pass, cause it will be too late by then.

One of the things I’ve been working hard at doing is reducing the number of drafts I need to do. With the God’s War books, at 100,000 words or so and three or four POV characters, this wasn’t too hard. I could write a crap draft, then run over it a couple of times doing big structural passes, and they were done. These books are far more complex than those, and writing them to deadline has been and continues to be a special exercise in madness.

Getting a draft done – a big pile of words with a beginning, middle, and end – is a great milestone, but it’s only that: a marker on a very long road.

I have miles to go yet before I sleep.