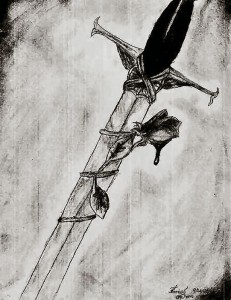 As I’ve been reading a recent SF title, it’s gotten me to think about what it is that makes fiction really great for me. Some of this I covered before when reviewing some of VanderMeer’s work, and the same issue is hitting me again with this book, only in the opposite way.

See, so far this is a nice action-packed little dialogue-and-fight-scenes book, and there was this big rolicking chunk of it that I really enjoyed before this current lull (I’m over halfway done now), but… there’s seriously something missing for me. It’s got the kick ass female protagonist, and the interesting worlds and characters who are actually not white! and not Christian! Which is great!

It’s falling into the same trap that I see a lot of SF books get accused of falling into, which is the: gee gosh bang wow look at all these neat ideas!

Oh, yeah, and there are these cool machine-people-superheros, but they don’t really care about anyone or themselves, because they are mechanically enhanced and have very little angst.

See, the problem with creating characters who don’t care about anybody and don’t reflect on their lives or tell you anything about them… it’s hard to love them.

I want to fall in love.

And the people, if not actual robots, end up being rather robotic, emotionally. Some of that I can get because they’re weirdly old and partially mechanized, but to me, it smacks of a real conscious desire to ignore the emotional and social ramifications of these sorts of technologies (I mean, look at Carnival! Uber-tech and characters who have intense emotions and huge backstory and everything! It can be done, see). What do really old people dream about? What’s their relationship with thier bodies like? What do they think about? Do they even care about people? Do they go through cathartic experiences, or is it all just one long day, and if it’s just one long day, what does that *feel* like? What does it *feel* like to be retrofitted to save humanity? Do you ever get drunk and hate yourself? Actively hate yourself, not just pass it off as being “nerves”? Do you still believe in what you’re doing?

Because here we have this plot clicking along, this very classic end-of-the-world-savior-from-tyranny thing, but… there’s no subplot. There’s no emotional core to this story. There’s no emotional hero’s journey, just people hopping in and out of machinery and neat ideas (which are neat, don’t get me wrong). But at the end of the day, I’m getting the feeling that it’s going to be one of those books I go, “Well, that was fun,” and set aside and forget about. The emotional ramifications of these techologies seems to be sitting somewhere on the backburner and handwaved. Some of this issue might be because we start headhopping early on and it’s a short book, so we can’t really follow anybody’s journey the whole way in any kind of bulk.

I realize that a lot of this is just personal preference – I want to know what the protag *feels* about the fact that she gave up her womb to be a weapon for humanity (what significance is attached to this womb? Hers or her societys? You may think that’s a dumb question, but if you think that, you’re seriously suffering from an atrophied imagination). I want to know how it *feels* to be a clone. Is this one of those clone-belief systems where they’re like robots, or where they’re really like siblings? Did they grow up together? Did they laugh and play together? What did she lose when she lost them? Do mechanized people have dreams and memories? Is it really in the best interests of tech to erase or supress “non esstential” memories? What do our memories give us? Can they motivate us? What do we lose when we lose memories? No tech is perfect.

What does it mean to be a man or a woman in any of these societies? Are women “equal” or are wombs more prized and women made even more subserviant because most of humanity is subserviant to an alien race? (I would argue that, historically, you’d find that women are abused most when they’re part of a slave system, because they get abuse from their masters and from the frustrated men of thier own species – or would they? And why not, if so?). This is one of those societies that does that weird handwave “well, we’ll have women starship captains but we won’t ever really talk about sexism” things. There’s some passing references to racism, but most racism is speciesism (sp); ie humans are beasts who’ve recently been kinda sorta “emancipated” just like slaves after the civil war (“yeah, you’re free but we own everything and you still have to work for us!”).

At Clarion, somebody said what I actually write are “Sword & Sociology” stories. The magic is sort of wishy-washy whatever maybe sorta, there’s lots of blood, but mainly what I’m about is how these settings created these social practices, and how these practices shaped different aspects of the society and the people in them. Beliefs about religion and women and men and honor and dignity and wombs and what it is to be a man (and if it even matters) and who’s in charge and when and why and the significance of sand… that should all be in there. Your society doesn’t exist outside of or removed from the technology. Everything it does, including the ways that people think and feel and the personal relationships and conflicts they get into, are going to be informed by these beliefs and practices.

But when you’ve got primarily dialoge and fight scenes book, awesome and exciting as those are, you end up writing a book about people that it’s much more difficult to fall in love with (particularly if you head hop a lot) and who might be interesting, but not interesting enough to remember afterward because you don’t spend enough time with them and don’t go on an emotional journey with them.

I’m not saying that’s happening with this particular book (the shrug, whatever aftereffect), cause I’m not done yet and a proper review is coming, but I have a bad feeling about it. Which really sucks, because I picked this book up and put it back down three times in the bookstore and then came back and finally bought it because I was afraid somebody else would buy it; I wanted a book about the ass-kicking heroine, but she’s now cloned herself into a ship and more than half the book is now from other people’s POVs, and gosh-gee-whiz-bang ideas aren’t enough to keep me jumping up and down about it.

We’ll see how it goes.