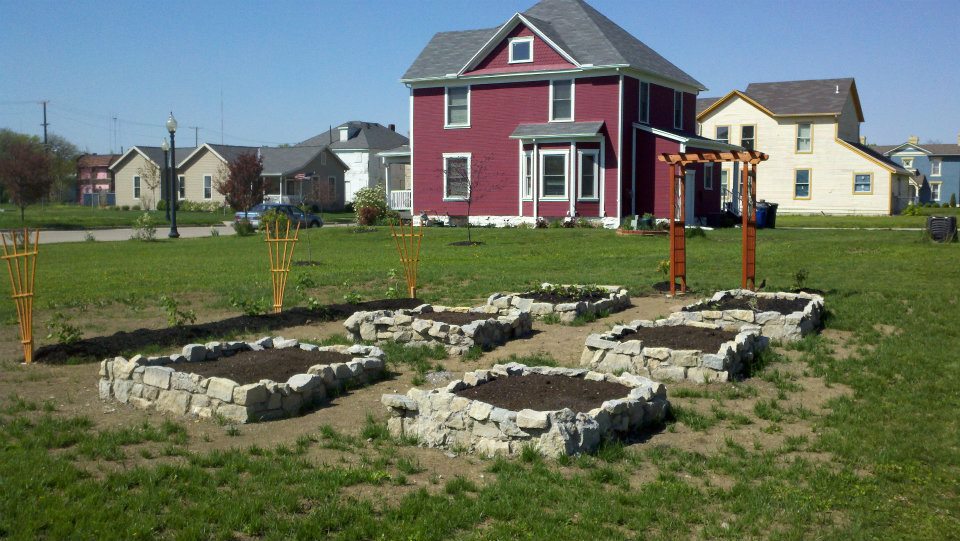 I grew up in the Pacific Northwest, where the expectation was that it’d be 60 degrees and raining all the time. This made gardening a pretty easy affair. Most stuff didn’t freeze, and it didn’t get hot enough for tropicals, and the sun came out so rarely that if you skipped a day or two or watering, it was no big deal.

Out here in Ohio, my gardening efforts have been rife with failure. I’ve planted annuals too early in the season, and had them burn in the frost. I’ve planted what I thought were perennials expecting they would come back, and then discovered they were tropical plants (tropical plants! They plant tropical plants in the PARKS here!) that were only good for a season. J. and I recently transplanted our well-nurtured plants grown inside from heirloom seeds only to find them dried and desiccated the next day. It turns out that you need to “season” or “harden” your seedlings before putting them outside, even when you’re past the final frost date, to get them used to the sun. Ours turned white and fell over. It was a little heartbreaking.

Then there was the planting of over 500 spring bulbs. Most of these turned out great, but I planted several things in pots that simply didn’t get enough light, and I had nearly two dozen bulbs that never flowered at all. I’m still in the process of pulling them all up and finding new places for them.

Figuring out what grows here and what doesn’t has been a frustrating process. The time and money wasted aggravate the crap out of me. After the scorched seedlings, I got my old familiar, “Just fuck everything feeling,” the one I get when I make an attempt at something that I feel I should know and then it fails. When I encounter failure, or, more often, a series of failures, that’s my default reaction. Just fuck it. It’s not worth it. Trying and failing just makes me feel like a stupid, worthless human being. So why bother?

After a few hours of fuming, though, I can talk myself down. See, we’re not born with some innate knowledge of how to do everything, despite the old “blood will tell” obsession our culture seems to have. “You got it or you don’t” isn’t true at all. And some of the shit we need to learn is really difficult. Anybody who says something came to them “naturally” is probably full of crap. What they mean is that they had a passion or affinity for something, and enjoyed working hard at it to get better. That’s what it’s been like for me and writing. I didn’t “naturally” pick up a pen and start making sentences… And ya’ll know that it’s still a struggle to plot my way out of a paper bag.

But creating stories was something I enjoyed doing, so despite all the setbacks and rejections and hours and hours of reading, writing, and studying, I didn’t quit. Oh, sure, I’ve come close many times. Especially once the long-anticipated book deal came through. There was an expectation that things would be easier after the book deal, that I could just concentrate on writing stories. But instead, what I realized is that I had this whole other half of the “being a writer” thing to learn – the business side. There were contract negotiations, and payment hiccups, and amended contracts, and cover conversations, and angry fan letters and distribution questions and sales numbers and career trajectories. I already felt pretty stupid as a writer who couldn’t plot or pace her way through 300 pages of novel, and then getting slammed in the chest with the business of writing on top of that was overwhelming.

To some extent, I’ve been able to leverage stuff I learned at my day job as it pertains to marketing and negotiations, but even that knowledge came at a high cost and many failures. I remember getting on the phone with someone I sent a press release to and having her patiently and kindly explain why the approach I took in the press release I sent her was garnering no response. During one particularly trying time doing PR at the day job, I even called an uncle with a background in PR and communications for advice to make sure there wasn’t some magic thing I could be doing that would Fix Everything. I enjoy marketing work because it’s honest about what it’s doing (yes, we would like you to BUY something!), and also because I take delight in figuring out how to communicate thoughts and ideas to specific people or groups of people in ways that really connect with them. It’s fun and challenging. But it’s not “natural” or easy.

After having my second round of French Sorrell seeds die on me, I gave in and ordered seedlings online. I planted them yesterday. My grandmother had French Sorrell seeds sent to her from France and grew them in her garden for as long as I could remember. It’s an herb you don’t see around here much, and it has a particular bitter-lemon taste (as children, we called them “sour leaves”) that reminds me of home. Time will tell if the damn things actually take root out here in a climate so different from the PNW and the temperate soil their species originally came from.

But if it doesn’t work out, I’m not going to give up gardening. I may not even give up on trying to plant French Sorrell out here. Because there are other things that could work. Makeshift green houses, or just bringing it indoors, or changing up the soil or where I’ve planted it.

What gardening here the last two years has taught me – even more than writing ever did – was that failure is always a possibility, but not the end of the world. You just dig everything back up, and you plant it again. Somewhere else. Somewhere more suited.

You do better next time.