Why your gun-toting chick isn’t feminist, redux: Thoughts on The Cabin in the Woods 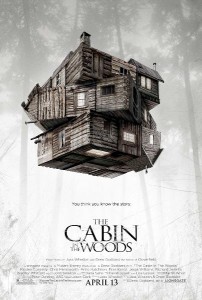 When I walked in to watch The Cabin in the Woods, I expected a total subversion of the genre. I was giddy at the idea of taking all the old horror movie tropes and fucking with them. I looked forward to the blonde who wasn’t stupid, the virgin who totally had a bunch of sex, the jock who spent the whole time doing his homework, the stoner who gave up drugs, and the “Other” who got romantically entangled with the blond. I expected everybody to live, to fight back, to overcome the sad sorry story of the maimed and bloodied teens in the woods. I expected moments of incredible heroism.

That was not the movie I saw.

No, the movie I saw wasn’t really a subversion at all, but, in fact, a reinforcement of every cliched horror movie you’ve ever seen. We were filling our primordial need for blood and gore and fear of sex as a sacrifice to the elder gods. Funny, right? Ha ha. But it’s a one-note funny. It’s a one-note idea. It’s lazy. And it’s not enough to make a whole movie out of.

You can’t build a subversive movie by simply reinforcing the status quo.

I’ve had a lot of issues with Whedon in this area since Dollhouse. It’s like because he had one show that was more feminist than other shows at the time back in the 90’s that somehow everything he does must be holy and Good for Women and even if he’s showing us women who are maimed, tortured, beaten, and humiliated for being women that that’s OK because a feminist is doing it.

You know what the thing is with writing feminist stuff? You need to keep exploring what exactly it is, what it means, and push that envelope further every time. Instead, what I’ve seen is a regression in how women are portrayed and treated in Whedon’s work, and it’s creepy.

I knew I was in trouble during the very opening scene of the movie, when the two guys BEGIN THE MOVIE by insulting women generally. Ha ha, right? Women and their funny women’s issues! You funny womens! The movie’s first line! I want to believe this is a wink-wink nudge-nudge thing like, “Ha, those crazy old white guys and their old white guy misogyny!” But throwing old white guy misogyny on the screen in scene after scene without challenging it or interrogating it or presenting an alternative to it is just… misogyny. Plain old misogyny.

And I realized then that if I was already starting to try and “explain away” Whedon’s misogyny in the opening fucking scene I was doomed. Because it meant that I was going to be trying hard to erase a LOT more misogyny later on. La-la-la-la not listening!

But I couldn’t just put my fingers in my ears and pretend somebody else wrote it. I knew who wrote it, and it broke my heart.

And that was just the beginning.

Throughout the whole movie, the guys are the puppeteers. The guys still get most of the lines. They’re in control. Throwing in Sigourney Weaver at the end for the final fight doesn’t magically “fix” the fact that I just watched a very uncomfortable movie about how men maim and humiliate women in service to their dark, primordial desires/underlord. The scene with all the guys oogling over whether or not the blond’s shirt was going to come off was just… unnecessary. As was much of this movie.

The real tragedy here is that, of course, Whedon is a great dialog writer. He does great characters. It’s funny, and often fun. There are cool moments. But as I watched this movie and laughed along trying to enjoy myself despite the squicky bits, I became more and more uncomfortable with it.

I kept waiting for the big reveal. For the huge subversion. But it never came. In the end, during the one scene where our virgin sacrifice finally has the opportunity to make a choice – she doesn’t make it. A guy takes away her choice. And when she finally has the chance to save herself, a guy saves her. And the blond is still made stupid and dies first, and horribly and in a sexualized way. Just as in the horror movies it pokes fun at, the woman is the only one to die while involved in sex. Are we subverting tropes here, or reinforcing them? What does it matter the REASON that these things happened? If you’re infantilizing a woman “for laughs” or because you seriously believe she’s a baby, you’re still infantilizing her. End of story.

Just as with Dollhouse, I’m not going to slog through episode after episode of a woman being tortured, raped, and infantilized just so you can give her a gun later and say “Hey, see, she’s empowered now! It’s all OK! Guns = feminism, right?” No. It’s not OK. It’s lazy fucking storytelling. You can fucking do better. There are plenty of politicians who would be happy to give women guns so long as they remained barefoot and pregnant in the kitchen. After all, they’d need to have guns to protect themselves from rapists when their men were at war, right?

Even the cast outside of the woods was mostly guys. We get one woman. One. Who is eaten like everyone else, of course, without doing anything terribly useful. In fact, much of the time, the guys are beating up on her like everything she’s ever done is wrong. She becomes their punching bag – and she takes it.

I have real problems with pretend-feminism movies. I get angry with lazy storytellers who hand women guns but then ensure that guys are making all of their decisions for them, or hand women guns but then dress them in leather pants and spend half the movie saying sexually explicit things about them, which, of course, the women just laugh or shrug off the way you have to do in real life because they are so polite and women must be pleasant and polite  (because in real life YOU DO NOT HAVE A GUN and superpowers that give you the ability to use it without consequence).

I’ve already heard that The Avengers suffers from some of these same issues, and I admit I expect to wince through those parts. What angers me is when people say, “Yes, but there are so many other GOOD things about X movie!” Yes, there are, but that sounds far too much like the old, “Lie back and think of England” bullshit way that we’ve been encouraged to endure every uncomfortable, humiliating thing heaped on us.

Fuck that.  I am tired of ignoring all the crap, lazy writing people do just because they can also write some funny jokes.

If you are going to subvert tropes, you had better be thinking damn hard about which ones you AREN’T subverting – and thus the ones you’ve also chosen to reinforce. Every choice we make as creators counts, and to see the lazy misogyny that crept into this steaming heap of a movie that was so effing close to being great was incredibly disappointing.