The Logic of Time Travel (With Graphs!)

As The Light Brigade takes the world by storm, I’ve heard from readers who want to know more about the “complicated graphs” I mention in the acknowledgments. These are the graphs that Dr. Joshua Bowman created for my agent, Hannah Bowman, and I to run The Light Brigade characters through to ensure there was narrative logical sense in all the time jumps.

Josh was kind enough to put together the graphs and explanations in a shareable form and gave me permission to post them here. All graphs are (C) Dr. Joshua Bowman.

WARNING: Spoilers below! (really. Read the book before you jump into the graphs and outlines!)

It may seem ridiculous, but it wasn’t until Hannah was like, “Well, we need to know how the events happen chronologically before we can determine how they need to be broken up” that I realized I should… um, have an outline? I hate outlining, but in a novel this complex, and with how quickly I’ve been producing work, it had to be done.

After getting to the 40k mark and getting stuck, I took a step back and created a Linear Timeline of events for the novel. This outline was very spare, and did not include my interrogation breaks. I knew those would need to get parsed in later once I figure out the way all of the events flowed. 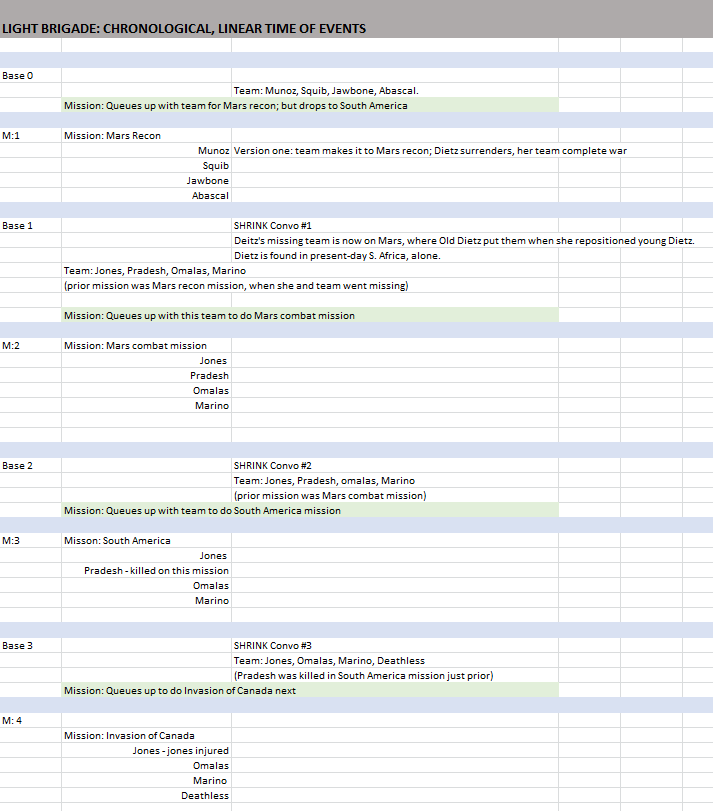 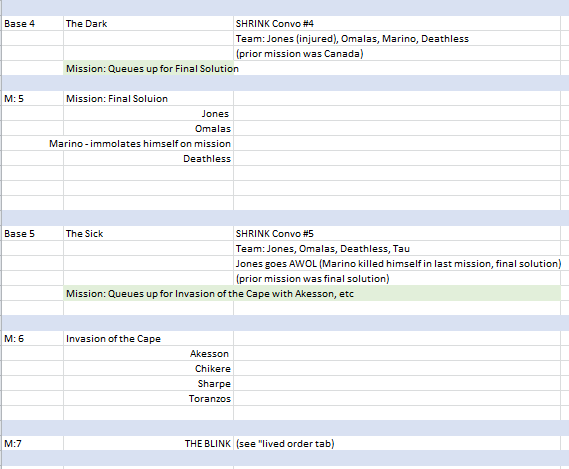 But is it Logical?

Having a linear timeline to reference was great, but now came the tough part: how to jumble it all up and still have it make sense. That’s where the math came in.

As Hannah explains it: “Hurley, I knew that you hated making the science in your books make sense, but in this case, I just knew that readers would only buy into the concept if the continuity was rock solid.”

According to Josh: “We have a wall in our hallway that is painted with whiteboard paint. One day I walked through while Hannah was drawing a timeline on the wall. She started complaining about how difficult it was to keep track of the jumps back and forth in time. After she had explained more of the premise, I drew two rows of dots, one above the other, and suggested they model the timeline as a bipartite graph, and just consider jumps between the two rows. We started adding arrows to the picture, and within a few minutes the usefulness of the model became clear as the earlier frustrations melted away.”

Here’s how that looks in practice: 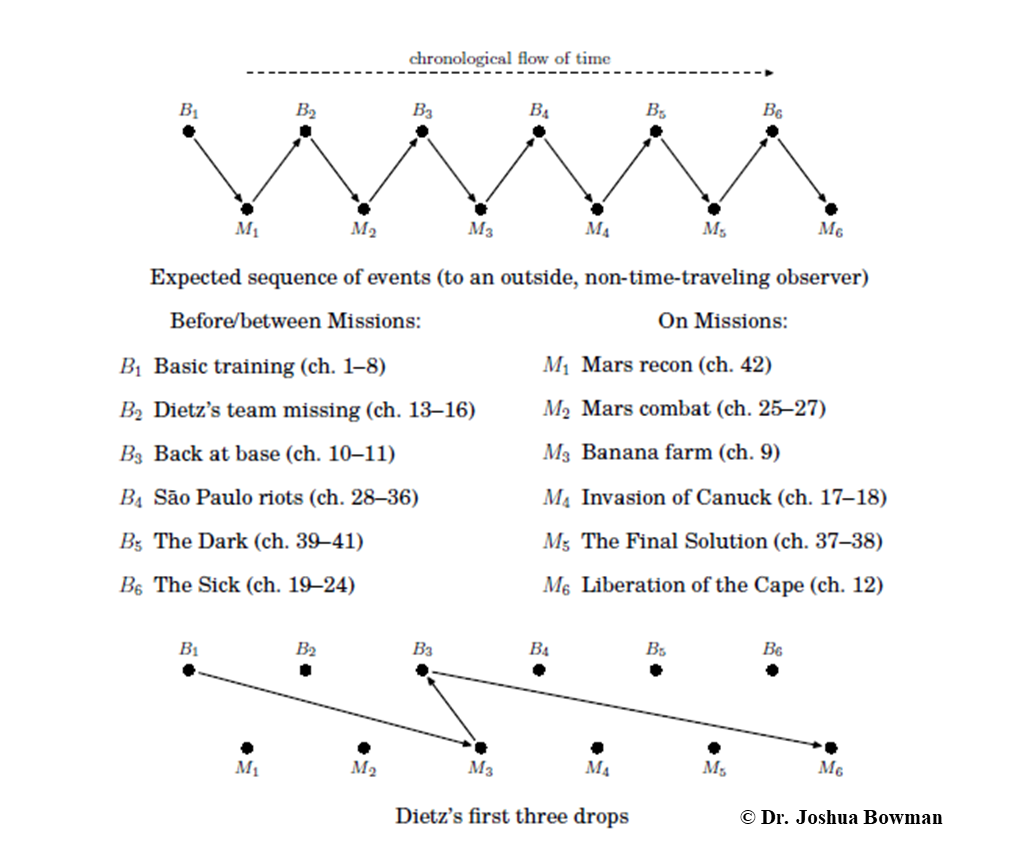 Once  they had the graphed lines, it was a matter of plotting all of Dietz’s drops:

Assuming you’ve read the book (!), you know that the Dietz who surrenders, defects, and is captured in Saint Petersburg then goes back in time to cause the Blink.

But is that logical? One of the things I’d wanted to do initially was have Dietz take her squad back in time with her. This was the graph that pretty much told us that wouldn’t work with everything else we’d set up. Instead, Dietz would need to leave her squad on Mars during M1 (Mission 1); she couldn’t simply take them all forward to M6 (Mission 6), which was how I’d originally written it. The whole thing fell down when I tried to do that.

So this is what we settled on: 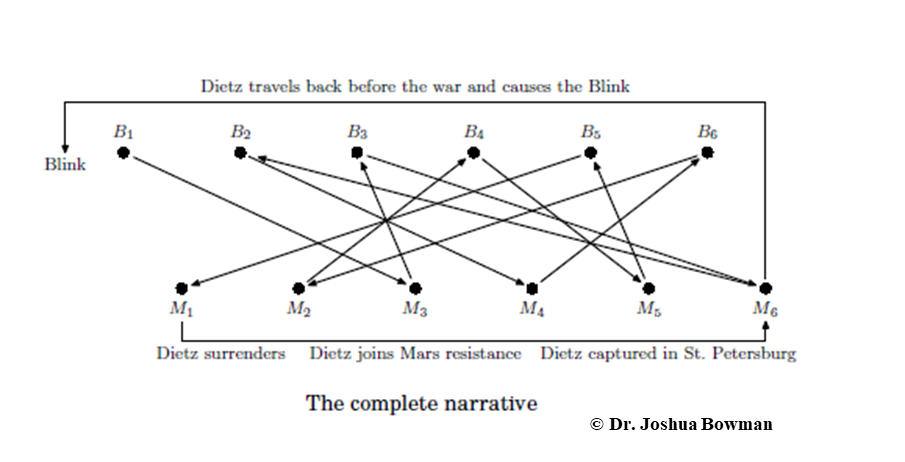 My Writing Outline – Events as Experienced by the READER

Logic sorted, I now had to WRITE the book. The outline below is the primary one I used while writing.

At every stage of Dietz’s journey I needed to know 1) who was alive/who had just died or been hurt, where the team had last been, and where Dietz had last been. Note that I also tried to track the marks on the bed (we ended up making these longer blocks of time).

Whenever I had a question about chronology, I would go back to the simpler chronological timeline above to fact-check myself (I did this often!). 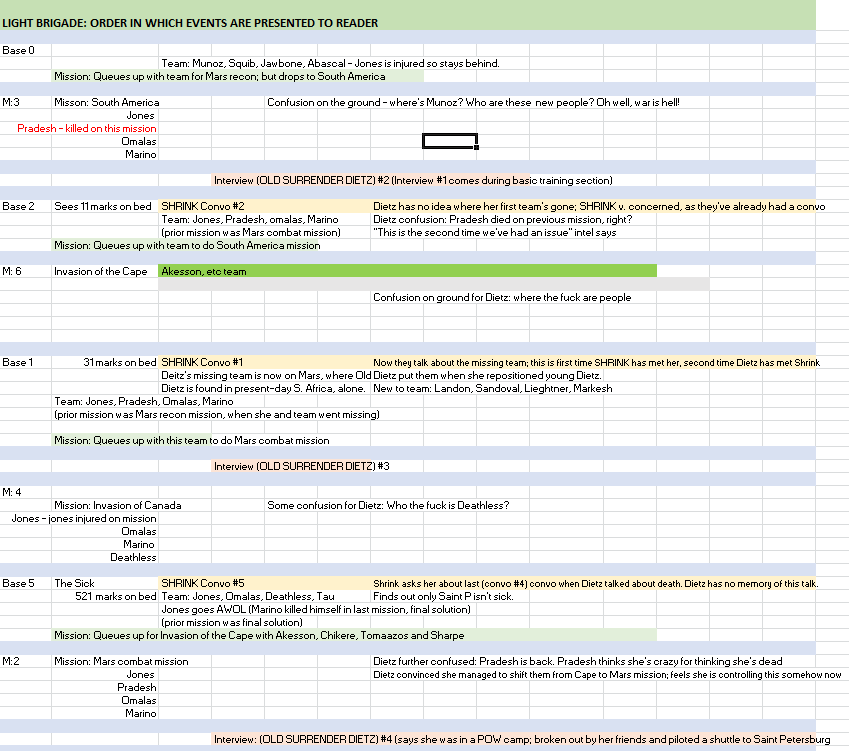 I have no idea why I thought it would be great fun to write a time travel novel… Ok, yes, I do know, and yes, once we got to the WRITING part, it WAS fun, but wow, getting there was a fucking team effort, and I would never have finished this one without help from my agent, Hannah Bowman, and Dr. Joshua Bowman. When we talk about how writing books is often a team effort, this is the sort of thing we’re talking about. This doesn’t even include the heavy lifting from the editorial team at Saga Press (so much copyediting required!) and help from my assistant, Denise Beucler, who was plugging in copy changes at lightning speed to help me reach deadline.

Some books are easier to write than others. What was great about this experience was that we did all the heavy lifting very early on in the process. While that part was excruciating, it took a lot of pressure off the actual process of writing. Many of my writing sessions were just delightful, even if I wasn’t writing the book quite as quickly as I’d written in the past. If only I could finish what I’d started in the future…