So back in June Angry Robot Books, publisher of THE MIRROR EMPIRE, closed its ancillary imprints, Exhibit A and Strange Chemistry. This was part of a wider cost-cutting exercise initiated by Osprey, Angry Robot’s parent company, which was going up for sale along with Angry Robot. Angry Robot has since pushed out its fall releases while wheels turn behind the scenes on this.  Now you know about as much as I do about that, all of which is public knowledge.

And the longer a sale takes, the longer it takes for the machine to start moving again. That’s all fine. That’s business, and I understand it. I continue to hope for a swift sale soon so that the future of my work and its publisher is sorted.

What I didn’t expect was for MIRROR EMPIRE to ship out its entire first print run in less than a month, leaving us here moving into week four of the release with no more books in the warehouse for places like Amazon and indie bookstores to order from. On the one hand: hell yeah! We shipped a lot of books! On the other hand: well, crap, Amazon and indie book stores won’t be shipping new orders for a couple weeks.

In the meantime, the good news (for you!) is that though we have shipped all those copies, they aren’t all sold yet. So here are just a few places where you can still order paper copies of MIRROR EMPIRE:

Also, ebooks are always in stock. You can even get a DRM-free version of the book here.

A: Not really, no. Angry Robot is an imprint of a larger publisher which is run by investors. Having a lot of experience with investors at my day job, I get how annoying they can be. Everybody at Angry Robot has been great; they’re up for sale with my books, too. We are in the same boat together.

Q: This is your second distribution snafu with a publisher. Why don’t you give up traditional publishing forever?

A: Let’s be real. I do a lot of promotional work myself, it’s true. But Angry Robot invested in this book. It wouldn’t have sold what it did without them, and I’m not going to sit here and pretend otherwise. That Richard Anderson cover alone, not even counting the editing, marketing, and publicity work, sold a lot of books. And continues to sell a lot of books. When publishing goes right, it goes very right. But publishing is a business, too, and it runs like a business.

A: I’m grimly optimistic that everything will be sorted in the next few weeks, before existing stock in the big box stores runs out. And it’s not like ebooks have been pulled (70% of my sales have been in ebook). I was also prepared for this months ago when the first intimation that there would be a sale came up (that’s when I had my little fit. I’ve since moved on). I’ve been through a sale before and despite everyone’s assurances, I knew the sorts of payment and distribution issues I would encounter. I can handle bad news a lot better when I’m prepared for it. Plus, let’s be real – the fact that the book needs a second printing in its third week of release is a pretty fucking cool problem to have.

Q: We’re really mad you’re not mad! We wanted to be mad at someone for you!

A: Well, sorry. When I have something I think is worth being mad at, you know you’ll be the first to know. For now, this is just business, and I’m hopeful it’ll all be resolved shortly in a business-like manner. In the meantime, there are still plenty of books sitting at existing stores, so go out and buy them!

A: My suggestion to everyone is, if you are planning on buying a copy of THE MIRROR EMPIRE, do it now. Whatever orders you make through retailers who don’t have stock will simply get backordered for when the book is reprinted. But I don’t have a date on that yet. So I’d grabby-grab a copy or two or ten now, just to be safe… (TWENTY! FIFTY! FIFTY COPIES HA HA HA!). As for me, I’m going to finish my last week of promotion and get back to working on book two, EMPIRE ASCENDANT, which is still scheduled for October 2015.

Thanks again to everyone for all the support! 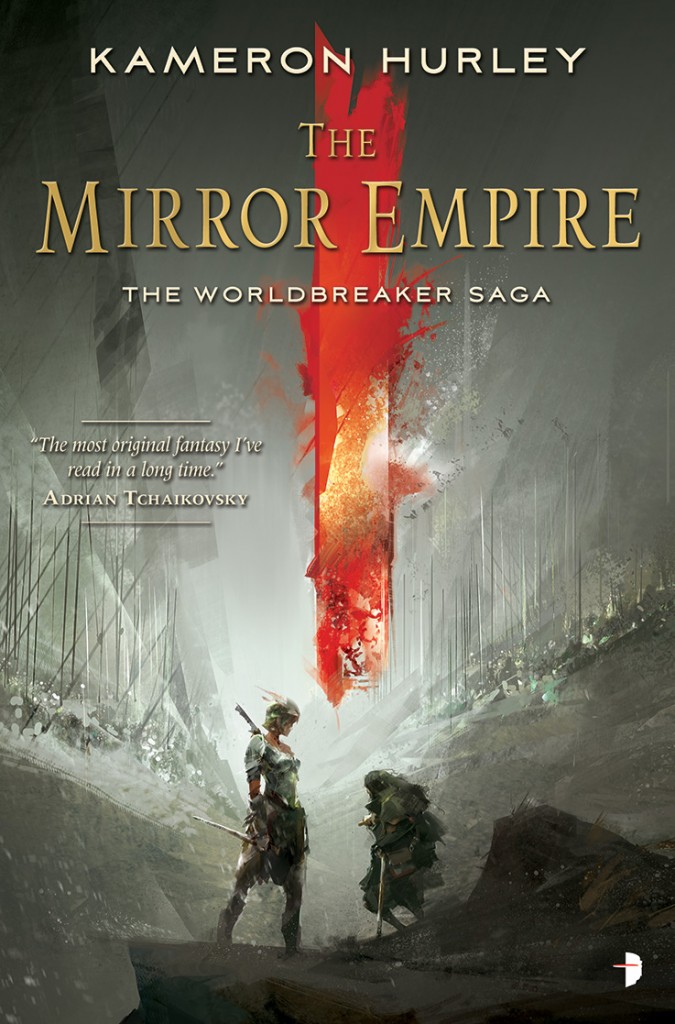